Football
News
As he prepares to sit out this weekend's game, Antonio demonstrated his importance to the Hammers.
Joey Mills
20:01, 16 Sep 2021

Michail Antonio underlined why West Ham United fans will miss him this weekend with an influential display as they beat Dinamo Zagreb in their Europa League opener. The forward opened the scoring in the first half, before Declan Rice added a second in the second period. The win represents a dream start for David Moyes’ side, but also the importance of Antonio, who will be suspended for the visit of Manchester United on Sunday.

Hammers fans can thank the suspension for the striker’s appearance tonight, as he looked unlikely to play before it became clear he could not feature against the Red Devils. After an opening where West Ham dominated possession but created few clear-cut openings. Just after the twenty-minute mark, the Hammers sprung to life. Antonio pounced on a loose back-pass that echoed Jesse Lingard’s disastrous mistake on Tuesday, and gratefully directed it past Dominik Livakovic.

No other West Ham forward functions in the same way Antonio does. He pressed from the front brilliantly, and he did not give the Zagreb defence a moment’s rest. They also do not have another forward who is as prolific. The Jamaica international has four goals in four games this season, and has got into double figures in the two previous seasons. Jarrod Bowen, who came on tonight, is perhaps the most likely to occupy that central role against United on Sunday. While he has been a fine signing for Moyes’ side, he does not offer the same intelligent pressing, physicality and finishing as Michail Antonio. 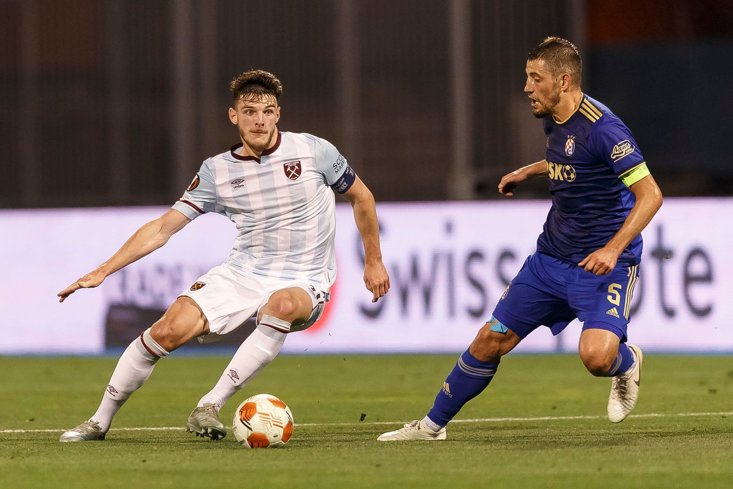 The lead was doubled in the second half with the sort of goal that Antonio himself would be proud of. Declan Rice burst forward from his central midfield berth to intercept an underhit pass. He powered forward, evoking Yaya Toure as he went, before slotting it past Livakovic and into the net. This completed a journey from Euros to Europa for the England midfielder, who was making his first appearance in European club competition.

There were plenty of other reasons for Moyes to be cheerful after making a winning return to European competition. Tomas Soucek got forward well and caused problems from set pieces, his constant threat peaking when a ball squirmed out of the box before the Czech had his shot blocked. Ryan Fredericks forced an excellent save in a one-on-one situation, as the Hammers continued to look like a home side rather than one on their travels.

Michail Antonio’s suspension will be a roadblock for this side, but this side is more than the sum of its parts. They are unbeaten in the league this season, and even without Lingard, who was inspirational on loan, they have picked up where they left off last season. If they continue in this sort of form, they can hope to make nights like tonight a regular occurrence.