First it was Wayne Rooney with a stunning hat-trick against Fenerbahce back in 2004. Then in 2016, Marcus Rashford grabbed a brace against Midtjylland. On Thursday night, it was the turn of Amad Diallo in a 1-1 draw against AC Milan. There is just something about Manchester United wonderkids announcing themselves at Old Trafford on the European stage. If only this one, like the previous pair, had been a match-winning turn.

The 18-year-old, born 11 days after Brazil defeated Germany in the 2002 World Cup final, produced a stunning finish to show off his supreme talent and prove why the Red Devils committed up to £37 million to prise the Ivorian from Atalanta.

Introduced at half-time of the Europa League round of 16 first-leg encounter in place of the injured Anthony Martial, Diallo was full of energy and movement. Within five minutes of coming on, the net was bulging. Bruno Fernandes showed immense vision to play a world-class ball high into Diallo’s path and the young attacker showed brilliant awareness to head the ball over Gianluigi Donnarumma in the Milan net.

It wasn’t a straightforward goal though. Diallo had to loop the ball over the keeper with his back to goal, all the while watching its flight as he bounded into the area. The best forwards know where the goal is, they know the posts never move. A quick glance told him the goalkeeper was off his line. In one swift move, United had their goal.

Manager Ole Gunnar Solskjaer forged a legendary career as a supersub for the Red Devils. Coming on late for Andy Cole or Dwight Yorke, he was always a threat and would so often score, from the Camp Nou to the City Ground, he was so lethal he was dubbed the baby-faced assassin. Diallo, too, has a baby face, still in his teens, and he was just as clinical as his boss on Thursday.

The club were quick to share footage on social media of a similar header scored by Javier Hernandez for United against Stoke in the Premier League. The Mexican was another who was fiercely accurate from the bench and clocked up a hefty amount of goals to boost the Red Devils points tally across a season. 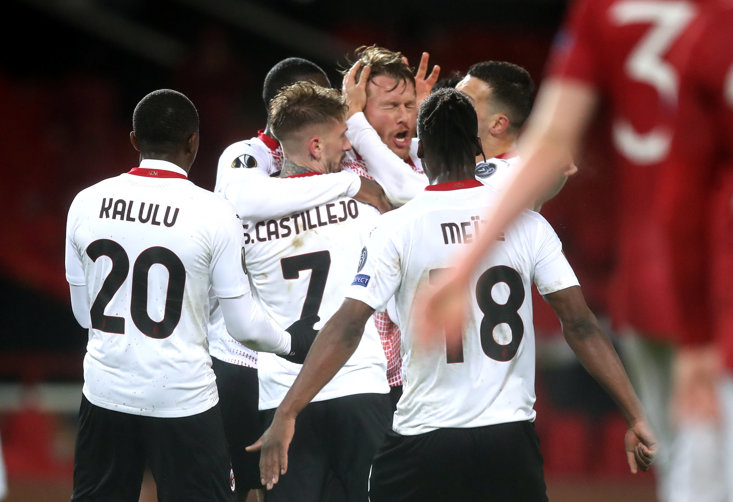 KJAER IS MOBBED AFTER HIS LATE LEVELLER

However, while Diallo showed his genius, United need more consistency in their starting XI, they cannot solely rely on a substitute to save them. Following on from an excellent win over Manchester City, more was expected against Milan. The visitors were depleted but still dominated for long spells, United didn’t show enough, they stuttered and stumbled.

This was a display in which they never really got going and Harry Maguire’s glaring miss, hitting the far post when it seemed easier to score, suggested it was going to be one of those nights.

Milan are on a similar trajectory to United, after years of struggle having fallen well below their usual standards, they have been rejuvenated. After a stunning first half of the season they have fallen away somewhat and now long a long way second best to rivals Inter, who hold top spot domestically.

But where these two sides differed on Thursday was in their readiness to take the game to the opposition, and Milan got their reward in injury time.

A speculative corner came in from Rade Krunic on the left and Danish centre-back Simon Kjaer, drifting towards the ball unchecked at the near post, glanced a header through the grasp of Dean Henderson. United shouldn’t have allowed it to happen, and they need to do more in such situations going forward.

They can’t go to rivals City and work hard for a 2-0 win then throw away such an opportunity days later. This was a night Diallo, clearly emotional after his goal, will never forget. For United, however, they need to find a way to turn in displays like Sunday’s more consistently.