Celtic were once again left to rue missed chances as they suffered a 4-0 defeat at the hands of Bayer Leverkusen at Celtic Park resulting in two defeats in two for Ange Postecoglou’s side in the UEFA Europa League.

The Hoops, like they did in Betis two weeks ago, started brightly and had several chances to open the scoring but Lukas Hradecky was a man-possessed in goal for the German side as he thwarted the Bhoys in Green countless times. There was a mentality shift amongst the home players on the pitch once they went a goal down and their organisation fell to pieces and they could not prevent themselves from continually making errors. They were taught a vital lesson by their German counterparts who showed them how to be ruthless with the chances they had to earn a comfortable victory in Glasgow. Piero Hincapie, Florian Wirtz, Lucas Alario and Amine Adli were all on hand to make it two wins from two for the German side in the competition.

It was another frustrating defeat in Europe as the Scottish side did not turn in a bad performance that the scoreline might suggest, but when you fail to take your chances, you cannot argue with the result. That is something the Australian head coach will have to work on before the club’s next European clash when they welcome Ferencvaros. With zero points from the opening two matches, Celtic will have to start getting points on the board and with their next game being at home as well, they will need to capitalise on that.

The game got off to an exciting start with both sides having chances at either end. Celtic looked destined to get the opener when Kyogo Furuhashi rounded Hradecky but Jonathan Tah made an excellent challenge to deny the Japanese star. He had another great chance to put the Hoops in front after timing his run to beat the offside trap to perfection but his effort just went wide of the far post after Hradecky got a toe on it. Joe Hart then rolled back the years when he was on hand to deny Moussa Diaby. 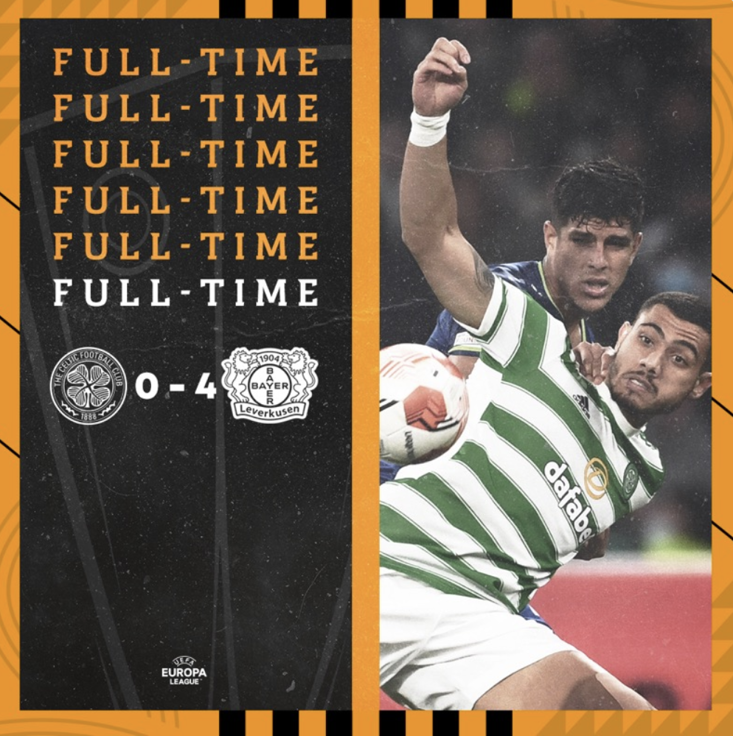 Celtic were made to pay for not taking their earlier chances as Hincapie stabbed home the opener after David Turnbull’s slip allowed Leverkusen to drag the ball into a dangerous area. The visitors extended their lead to two as Wirtz was on hand to fire home at the back post as Celtic couldn’t stop making errors. As they pushed to get back in the game, they kept getting frustrated by the Finnish goalkeeper who made a string of world-class saves, denying Furuhashi again before parrying a powerful effort from Jota. The game was then put beyond doubt as Alario scored from the penalty spot following a hand ball by Cameron Carter-Vickers. The icing on the cake was Adli’s rocket effort that gave Hart no chance with the last kick of the game.

Down in London, West Ham United’s fine start to the season continued as they grabbed a 2-0 victory over Rapid Vienna which sees David Moyes’ side take six points from six in the Europa League so far. Declan Rice, the star midfielder and England international was the hero at the London Stadium as he converted the best chance of the game after being assisted by the club’s in-form striker Michail Antonio, before the in-form Said Benrahma added a second late on.