Football
News
The war-torn nation put in a heroic performance to secure a 3-1 win at Hampden Park
Simon Lillicrap
21:53, 01 Jun 2022

After an emotional 3-1 win over Scotland, Ukraine are just one game away from the World Cup.

Football has rarely felt so significant. As 11 Ukrainians emerged from the Hampden Park tunnel, each one draped in their nation’s yellow and blue flag, the world watched on to see if they could pull something special off. The suffering that these men have been through is almost unthinkable and yet, in the Scottish capital they played the game of their lives to secure a deserved win and a place in the play-off final against Wales.

As their friends, family and countrymen continue to defend their land from the unforgivable Russian invasion, they performed on the world stage. Contrary to the popular Bill Shankly quote, football is not far more important than life or death, but tonight, Ukraine showed just how significant the sport can be.

With six players representing Ukrainian clubs in the starting XI, the visitors had a seismic task in front of them. Their domestic league season was suspended in April and many of these players haven’t played a competitive game in months yet they stunned Scotland with a gritty and dominant display.

"Many of our fans are soldiers in the Ukrainian army," manager Oleksandr Petrakov admitted in the build-up. The 64-year-old also revealed that he tried to sign up to defend his home city of Kyiv as soon as the invasion began.

"It would be wrong if I ran from my city where I was born," he explained. "But they said ‘You are too old and don’t have any military skills. Instead, you better bring us to the World Cup.’"

Now, Petrakov and his players are just one game away from fulfilling those dreams. This was only the semi-final, but these players had let their country forget about their worries for 90 minutes. Make no mistake, if Ukraine make it to this World Cup it will go down as one of the greatest sporting achievements. Certainly it would be difficult to match from an emotional perspective.

The opening goal, one of such magnitude, had to be scored by Andriy Yarmolenko. Only Andriy Shevchenko has scored more goals for this proud country than the former West Ham man, and in recent years, he has been their talisman. From a sporting sense, he has always produced when his country needed him and now, he was steely-eyed and focused, ready to shoulder the weight of responsibility. 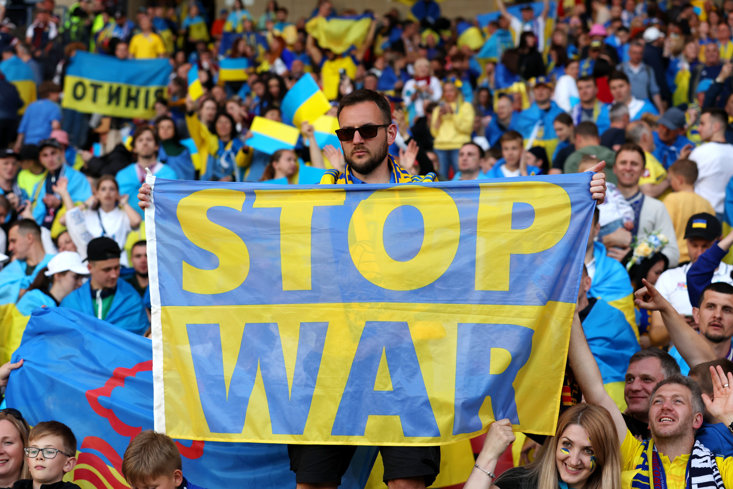 Craig Gordon had already denied him from close range when on the half hour mark, Yarmolenko put his side in front with a wonderful finish. He brought the ball down with a majestic touch and lofted it over the in-form goalkeeper. Minutes after the break, Ukraine had the second. They played the ball around like one of Europe’s best, before Roman Yarumchek got on the end of a cross to head home.

Steve Clarke’s Scotland were second best, but this was a vintage performance from the visitors. John McGinn missed a header from three yards out when the goal was gaping, but Scotland would muster a grandstand finish.

A goalkeeping error saw Calum McGregor’s effort bobble over the line and all of a sudden Hampden came alive. Ukraine looked jaded, perhaps typical of a team that hasn’t played in so long, and yet they held on, for all they are worth. More than that, they even added a late winner as Artem Dovbyk broke clear to score with the last kick of the game.

The celebrations at full-time were remarkable. A packed away end at Hampden Park cheered their team off and amid so many tears of sadness across the past few months, finally Ukraine got to enjoy tears of joy. One game away from the World Cup. One more chapter of this emotional sporting story.