Boxing
News
Taylor's next move, Shields and Marshall's feud and Mayer and Baumgardner's unification are all on deck for the second half of the year
Joey Mills
17:00, 26 May 2022

Back in December, The Sportsman predicted 2022 would be an incredible year for women’s boxing. Without wanting to blow our own trumpet, that is exactly how it’s panning out so far. Katie Taylor and Amanda Serrano competed in a Fight of the Year contender, new world champions like Ebanie Bridges and Natasha Jonas have been crowned, and Claressa Shields reminded us all of her abilities against previously-unbeaten, two-weight world champion Ema Kozin. But as wonderful as the first five months have been, women’s boxing is already setting itself for a blockbuster second half of the year.

Mikaela Mayer and Alycia Baumgardner have agreed to meet in a super featherweight unification fight this summer. Top Rank will stage the bout, with Mayer’s WBO, IBF and The Ring belts on the line, as well as Baumgardner’s WBC strap. Mayer defeated Jennifer Han by decision last month, and is yet to taste defeat in 17 fights. Baumgardner made waves on British shores last November, stopping Terri Harper to lift the WBC title. ‘The Bomb’ decisioned Edith Matthysse last time out.

The bout is the latest super-fight in a sport adept at putting them on with frequency. The health of boxing is dependent on its best fighters getting in the ring together, and Mayer and Baumgardner meeting is the exact sort of fight that should be getting made. Hopefully the winner will go on to face WBA champion Hyun Mi Choi to crown an undisputed super featherweight queen.

Another huge fight in the offing for later this year is Katie Taylor’s homecoming bout at Croke Park in Dublin. Initially it was expected that ‘KT’ would meet Amanda Serrano in a rematch of their Madison Square Garden classic. The Independent has reported that talks have hit “a stumbling block”, and an unexpected replacement is now being sought.

UFC fighter Holly Holm is understood to be targeting a return to the squared circle, and is reportedly in the frame for the Taylor fight. ‘The Preacher’s Daughter’ is the only athlete to hold world titles in both UFC and boxing. A pioneering figure in women’s boxing, Holm was a three-weight world champion who racked up 16 title defences. 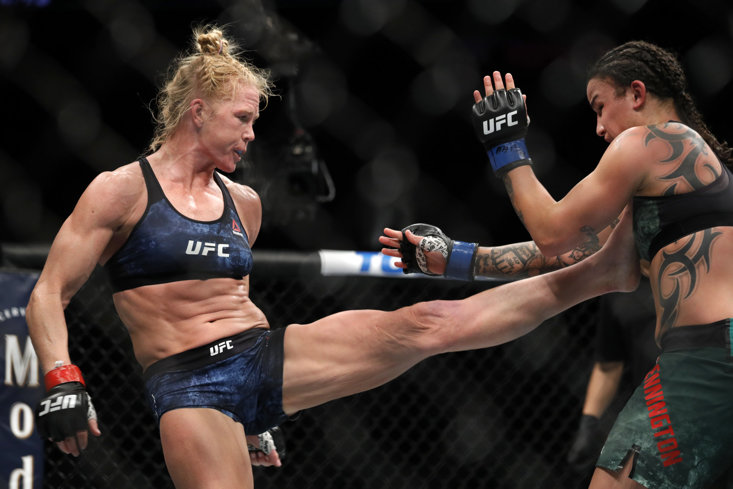 could holly holm swap the cage for the boxing ring this year?

While Taylor and Serrano’s already-iconic bout not getting an immediate rematch would be a shame, this cross-generation clash of two of the greatest women ever to box is a great fight in its own right. Croke Park holds over 80,000 fans. If Taylor fills it for her homecoming, it will be the biggest attendance for a women’s boxing main event in history.

As if these blockbuster bouts are not enough, a true grudge match is in the offing at middleweight. WBC, WBA and IBF champion Claressa Shields lost in the amateurs to WBO boss Savannah Marshall. It is the only boxing match, amateur or professional, that the ‘GWOAT’ has ever lost, and it still riles her to this day. The pair have clashed frequently both in public after each other’s fights and on social media.

Far from the bluster of many supposed “feuds”, the enmity is very real between these two unbeaten pros. Add the extra spice of an undisputed championship on the line and you are bound to see fireworks. With Taylor-Serrano in the history books, this is arguably the next biggest fight women’s boxing can offer. Here’s hoping that soon the talk will be over, and we can see these two brilliant champions settle their differences in a prize ring.

What has become clear is that while Taylor-Serrano felt like a culmination of everything women’s boxing has been building towards, it was also more a beginning than an end. The sport is so well-stocked with genuine world class talent and intriguing match-ups that this wonderful era can continue well into the future. As the sport goes from strength to strength, we should have an abundance of boxing action to savour in the months and years to come.