It was a game plan based on containment and aided by controversy, but Morecambe are a third-tier club for the first time in their long history after their 1-0 victory against Newport County in Monday’s League Two play-off final at Wembley.

The Shrimps will be facing historic clubs such as Sheffield Wednesday, Ipswich Town and Sunderland as equals in League One in 2021-22 following Carlos Mendes Gomes’ 107th-minute penalty winner in a tense affair under the arch at the national stadium which never really hit the heights of the two play-off finals which had preceded it over the weekend.

Derek Adams had set his side up in a considered manner, leaving Newport to make much of the running for the most part, and there were a few strokes of fortune to thank for them being in a position to win the game late on. Not least of them was a penalty shout for the Welsh side early in the first half.

Scot Bennett got his header in from a Mickey Demetriou long throw, skewing the effort wide of goal, but in Kyle Letheren’s attempt to clear the danger the Morecambe goalkeeper’s fists connected with Bennett’s face after the ball had gone. It was the single major moment of a first half played in stifling conditions and left Newport fans fuming at referee Bobby Madley for his failure to award a penalty. 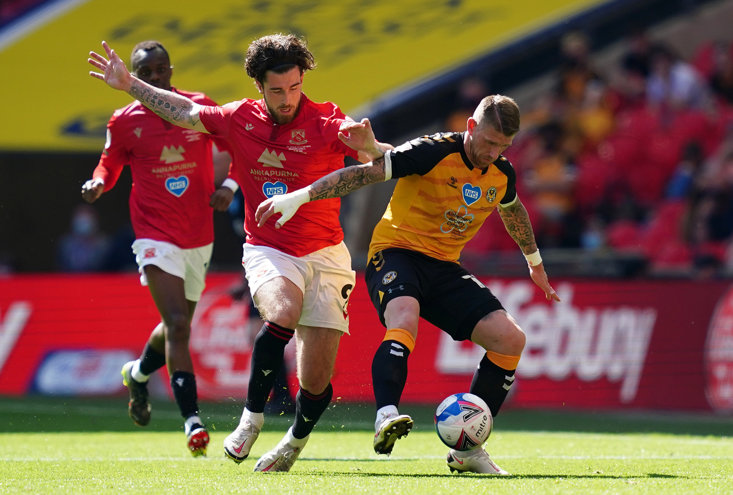 County skipper Joss Labadie could so easily have made that incident immaterial when getting on the end of Nicky Maynard’s right-wing cross during the first period of extra-time, but having been slightly distracted by team-mate Kevin Ellison’s near-post run, Labadie could only steer his effort over the bar.

And shortly after the break in extra-time, Newport were left stunned when referee Madley awarded a penalty against Ryan Haynes after a tackle which appeared to have taken place outside the area, with an exaggerated fall from John O’Sullivan also potentially playing a part. Regardless, Mendes Gomes kept a cool head to slot home and send the Morecambe end into ecstasy.

While Newport will wonder long and hard about the two key decisions made by the official, they will also be left kicking themselves for not having made more of their domination of possession. Having bossed so much of the game, they created nowhere near enough chances to really make the most of it.

Instead, it is Morecambe who are promoted, and the Globe Arena will play host to some huge names in front of – hopefully – some packed houses in 2021-22. They will need to play better than they did at Wembley for the majority of the season, but they will worry about that another day. On Monday, they did what they needed to do to get over the line, and their rich reward is football at a level they have never before known in 101 long years.