Modern football fans are largely a fickle bunch. They’re loyal enough, but only for as long as you’re wearing the same colours they are.

Jose Mourinho knows that all too well. As Chelsea manager he was praised to the rafters by the Stamford Bridge faithful, but when he returned to west London as the boss of Manchester United in 2016-17 he was called ‘Judas’ by the home fans.

That is not an uncommon story. While there are some obvious exceptions - Rafa Benitez will always remain treasured by Liverpool fans, for instance - former bosses generally tend to leave on poor terms and so get it in the ear when they retread familiar territory.

It will be a different story on Wednesday night though, as the Tottenham boss returns to Manchester to face United less than one year on from his Old Trafford departure.

Different because Manchester United fans tend not to be so fickle. It was something I had heard about but never truly appreciated until working as a United Correspondent for over four years. They might not always love the football on show, but they demonstrate patience in abundance towards those fighting for the United cause.

Of course, the Twitterverse is full of supporters whose opinions bounce this way and that from minute to minute regardless of their allegiance. But on the terraces at Old Trafford there is a more circumspect, understanding type of supporter.

They are not the type to call out former allies. They instead show an appreciation. When planes with banners fly over complete with knee-jerk messages, most matchgoing United fans cringe. When the team needs their encouragement, they provide it. When a manager is under pressure, there are no voices of dissent in the crowd - while it was clear at various points that David Moyes and Louis van Gaal were living on borrowed time, there were still no significant chants for the managers’ heads from the United end.

Even considering some of Mourinho’s antics while United manager - boasting of his own achievements against them when knocked out of the Champions League, ostracising some of his first-team players at times when results were not coming easily - the fans never turned on him, and they will accentuate the positives when he steps out at Old Trafford on Wednesday.

And Mourinho himself knows that.

“Going back to Old Trafford is to go back to a place where I was happy. I can say that I was happy,” he said on Tuesday ahead of his return visit. “I have a great relationship with the Manchester United supporters. I went back as a pundit, which is a different perspective, and I was really humbled by such a beautiful reception.

“Now I go back as the coach of the team that is going to try to beat Manchester United and that maybe gives a different perspective, but I expect the respect that they always show towards me. But I understand that what they want is the exact opposite of what I want.” 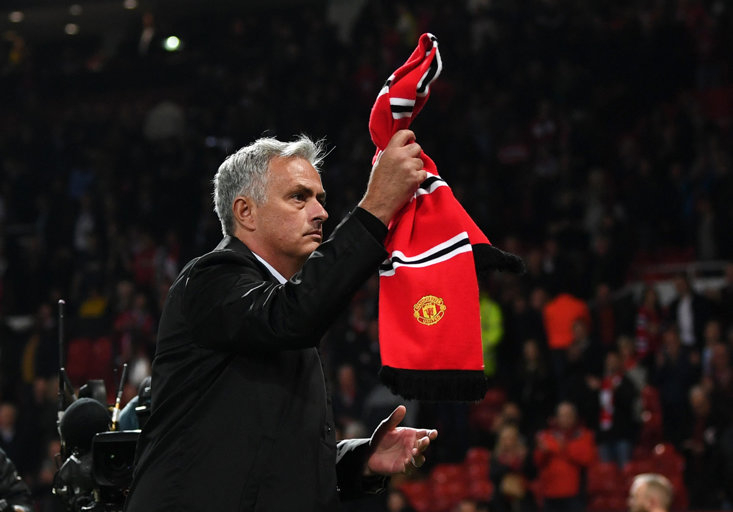 Even current United boss Ole Gunnar Solskjaer is certain of a special welcome for his opposite number:

"[He’ll get a] very good reception. That's just a testament to this club and the supporters of this club. Of course, they remember the two-and-a-half years he was here and he won trophies. So, for me, I'm 100% sure that our fans will welcome him, and the staff and the club… everyone."

There should never be a question over Mourinho’s place in United fans’ minds, if not their hearts. The controversies he caused ensured that his spell at Old Trafford would be a relatively brief one. He simply didn’t fit the mould expected of a United boss.

But that doesn’t mean that the Old Trafford supporters are not thankful for what he did bring to the club during his spell in charge. They still sing about the likes of George Best, Eric Cantona, Ryan Giggs and Sir Alex Ferguson exactly because they don’t forget their greats.

And while Mourinho doesn’t fall into that category, he was a qualified success at least. United supporters appreciate the highs, and they are understanding enough to realise that the club and the manager were just never quite the right fit.

A modicum of affection remains for Mourinho among the United support even now they have both moved on. And the feeling is mutual.

“I am Tottenham,” Mourinho added on Tuesday. “If you want to speak about my history there, you go to my office upstairs and I still have a couple of pictures of my United time, and that is it.”