Football
News
The Tottenham boss gave his side little chance with the way he set up
Elliott Bretland
21:43, 04 Feb 2021

There was still half an hour to go and Tottenham were only trailing by a single goal at home to Chelsea but Jose Mourinho’s face was full of anguish. The Spurs boss arched his back, his arms went up to his head and he winced as if he was watching a car crash in slow motion. In many ways he was. Mourinho grimaced, not because he was set to lose his proud record of never losing two consecutive home matches but because Eric Dier had played an abysmal high ball back to his goalkeeper Hugo Lloris.

Mourinho is a master tactician and he can set any team up to take on the very best. What he can’t account for though is human error. When he meticulously planned the perfect way to get the better of Thomas Tuchel’s Blues, hours of hard work and planning will have gone into it, he’ll have spent days drilling his team on the training pitch. What he can’t have predicted though was that one of his defenders would make a massive error in his own box and foolishly, needlessly, give away a penalty.

Dier threw a real spanner in the works for Mourinho on Thursday night as Tottenham went down 1-0 to the manager’s former club. Not only did he play a dreadful ball pass to his keeper but it was he who cost his side by handing Chelsea a spot-kick, falling to the ground after getting on the wrong side of Tino Werner and tripping the German with a loose and lazy leg. A week of planning foiled in a split second. Jorginho duly scored from the spot and it was game over from there. 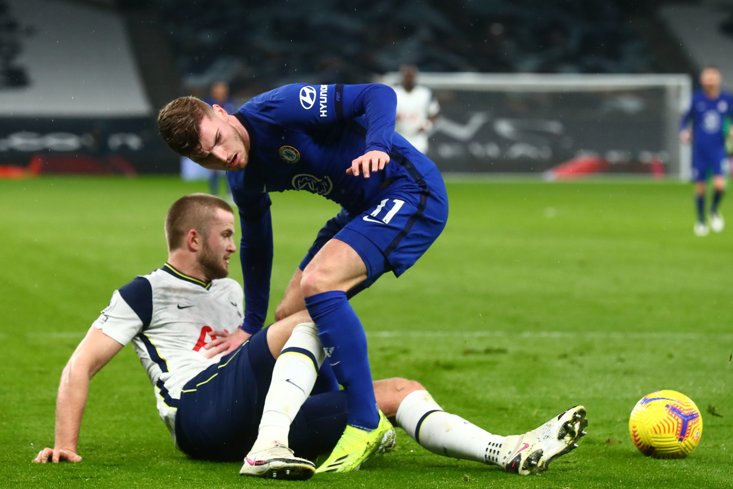 Tottenham were too passive, too lethargic in their build-up play and without the talismanic Harry Kane leading the line, Son Heung-Min’s usual effectiveness was diluted. Carlos Vinicius was isolated and Spurs’ attacks didn’t knit together.

Mourinho’s style is perfect if Tottenham had played out his plan to a tee. Keep it tight and then hit the opposition late on and glory is theirs. But it didn’t happen. Being honest, Spurs could have played for another 900 minutes and would likely not have scored.

Without a home crowd to rally them on, credit should be given for a slightly improved showing in the second half, but still they didn’t properly get going. They did have a huge chance with five minutes to go, Vinicius climbing high to head Serge Aurier’s sumptuous right-wing cross, but he arrowed it wide. One can’t help but think that Kane would have buried it. Mourinho walked back along his touchline in frustration as he had for much of the second half before applauding his troops and urging them on. Son then skied an effort over the bar with barely any time left and his manager knew that was that.

Speaking to BT Sport after the game, Mourinho's first response proved his modus operandi is to stifle teams first and foremost, as he insisted: "[It was] bit of a struggle but how many chances? The penalty?"

Informed Chelsea had two shots on target, he continued: "Yeah, so the struggling, it is what it is. We didn't have the ball, correct. We didn't create in the first half, correct. But the struggle was the penalty and in the end it's the penalty that decides the game... It's a penalty that is difficult to accept, so to lose the game with a penalty like this is a bit painful."

At times, you can tell whether a Mourinho side will win or lose based on his body language, and tonight it looked like defeat the moment Dier’s foot clipped Werner. The Spurs manager’s face crumpled and he knew it would be a long road back.

If Mourinho’s players were chess pieces, he would checkmate every manager and team on the planet; but his style presupposes that footballers can be moved around a pitch just as easily as a rook or a pawn. Sadly though, his players are human and once they cross that white line, it’s down to them. Mourinho leaves them with almost no leeway thanks to his defence-first policy.