“Is Die Hard a Christmas film?”

It’s a debate that has raged and swirled around this most wonderful time of year like a snowstorm for decades, and it’s one that is unlikely to be comprehensively solved anytime soon.

If you ask us though, it’s definitely a Christmas film (So is its sequel and Lethal Weapon for that matter, but we’ll save that one for another year). It’s set on Christmas Eve, there are multiple references to the holidays throughout, and a rendition of “Let It Snow” being crooned out at its conclusion provides a bigger festive thrill than Clarence getting his wings.

But while John McClane, Hans Gruber and his merry band of thieves find themselves the subject of this annual argument at an increasingly frequent rate, we’d like to pay tribute to a different film that could easily find itself in the same discourse: Rocky IV.

The fourth instalment of the Rocky franchise remains one of the most beloved sports films ever and for good reason. Sylvester Stallone’s magnum opus went on to gross approximately $300m worldwide, making it the highest-grossing sports film of all time until The Blind Side surpassed it nearly a quarter of a century later. 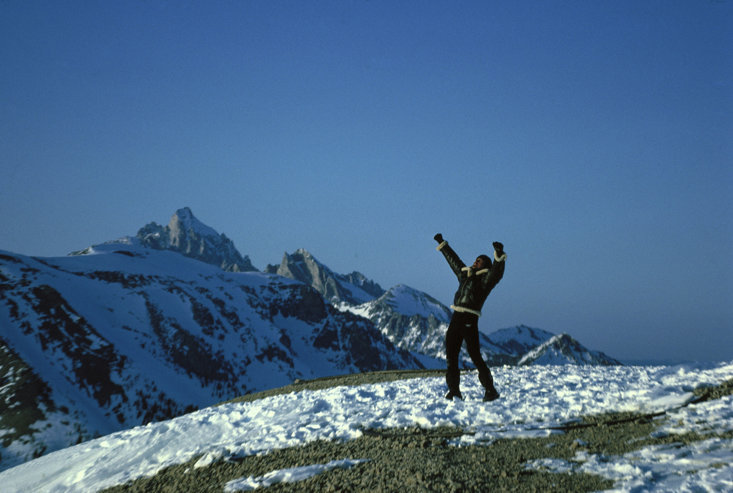 Why does it belong to Christmas? Well for starters, the film’s climactic showdown between the titular Rocky Balboa and human PED dispenser Ivan Drago takes place on Christmas Day, 1985. That’s right, history fans; 37 years to this very day, ‘The Italian Stallion’ effectively ended the Cold War with a 15th round knockout win over ‘the Siberian Express’ on Soviet soil.

Then there’s the setting, of course. To get over the death of his frenemy Apollo Creed, killed at the steel fists of Drago at the beginning of the film, and to prepare himself for a showdown with his new nemesis, a man who eats anabolic steroids with his Weetabix, he descends to the Siberian wilderness. The snowy backdrop as Balboa indulges us with the 38th training montage of the film is undeniably Christmassy. Even Die Hard doesn’t have snow!

After Rocky conquers the seemingly invincible Drago, delivering the USSR a humiliating blow, the film ends with a speech that would rival Her Majesty’s. If you don’t fancy tuning into the King’s Speech this year, fire up Rocky IV (it’s currently on Amazon Prime in the UK) and listen to Balboa tell his now adoring Russian audience, “If I can change, you can change” before wishing his son, watching on TV at home, a “Merry Christmas.” 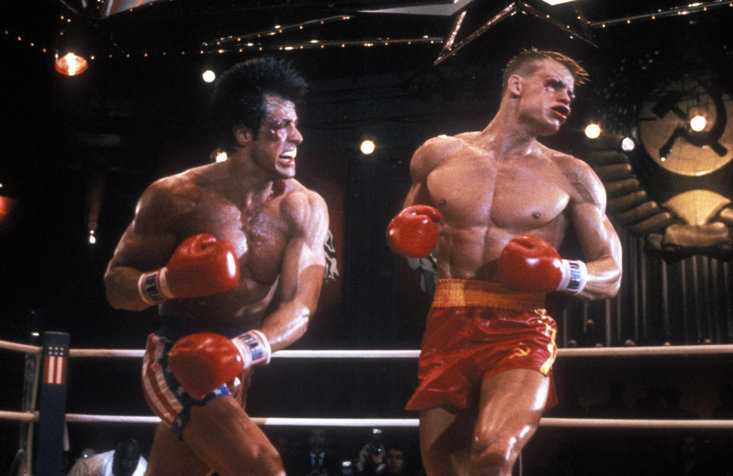 Think we’re stretching the “Rocky IV is a Christmas film” spiel a bit? Well buckle up for more. There are gifts; the literal gift of freedom in one case, a talking robot in another. And what’s more festive than fighting at Christmas? You might not uppercut a family member for taking the last Quality Street, but there’s no doubt things often get heated. Rocky IV understands that better than any Crimbo classic could.

Christmas film traditions are part of the very fabric of this special season. For some, it’s seeing Kevin McAllister torture two hapless burglars in Home Alone, to others it’s watching Alan Rickman cheat on his wife in Love Actually. For us though, it’s witnessing Rocky Balboa and Ivan Drago beat the living hell out of each other. Merry bloody Christmas.

x
Suggested Searches:
The Sportsman
Manchester United
Liverpool
Manchester City
Premier League
More
boxing
In The Dark: Are British Boxing Fans Under-Served By Television...
You’ve got a Sky Sports subscription and a BT Sport package. You have been a subscriber to DAZN [ ... ]
boxing
'Real Deal' Amanda Serrano Wins, But Katie Taylor Rematch Is...
Amanda Serrano beat Erika Cruz on Saturday night in an absolute war. In doing so, ‘The Real Deal’ [ ... ]
boxing
Adam Azim Vs Santos Reyes: Everything You Need To Know
One of the biggest talents in British boxing right now, Adam Azim, returns to the ring this weekend [ ... ]
boxing
Here Comes The Baum: The Meteoric Rise Of Alycia 'The Bomb'...
It feels churlish to even specify “women’s boxing” these days when talking about the [ ... ]
boxing
Emanuel Navarrete vs Liam Wilson: Everything You Need To Know
The vacant WBO super-featherweight title is on the line on Friday night when former two-weight world [ ... ]
boxing
Don't Wait Until Retirement To Appreciate The Hall of Fame-Bound...
Too often in life, we leave it too late to appreciate what we have. Sport is one of the guiltiest avenues [ ... ]
boxing
Boxing's First Tag Team Match And The Weirdest Combat Sports...
Combat sports is in a weird place. The most famous fighter on the planet is a YouTuber who has never [ ... ]
boxing
Anthony Yarde's Defeat To Artur Beterbiev Did More Good Than...
If a fight looks like Mission Impossible and sounds like Mission Impossible, sometimes it simply is [ ... ]
boxing
Caleb Plant Vs David Benavidez: Five Boxing Stories You Might...
With the afterglow of one big British card behind us in Liam Smith vs Chris Eubank Jr and the anticipation [ ... ]
boxing
Why Brave Anthony Yarde Is The Cure For The Common Boxer
In a world with four recognised sanctioning bodies, several unrecognised sanctioning bodies and a litany [ ... ]
boxing
Announcement Imminent: Anthony Joshua Vs Jermaine Franklin At...
Two-time unified heavyweight champion Anthony Joshua is reportedly set to fight Jermaine Franklin at [ ... ]
boxing
Artur Beterbiev And The Hardest Hitting Light-Heavyweights In...
Boxing fans will be treated to one of the hardest-hitting match-ups of the year this weekend when unified [ ... ]
boxing
Floyd Mayweather Vs Aaron Chalmers: Everything We Know So Far
Floyd Mayweather will return to the ring next month to take on former Geordie Shore star Aaron Chalmers [ ... ]
boxing
Boxing's Doomed Superfight: The Long Road To Josh Taylor Vs...
One of the most hotly anticipated fights in British boxing has been delayed yet again. WBO super lightweight [ ... ]
boxing
See You At The Crossroads: What Next For Chris Eubank Jr And...
Liam Smith vs Chris Eubank Jr had all the hallmarks of a crossroads fight. While they are only a year [ ... ]
boxing
Artur Beterbiev Vs Anthony Yarde: Everything You Need To Know...
Boxing fans will be treated to one of the hardest-hitting match-ups of the year this weekend when unified [ ... ]
boxing
Mersey Beat: Liam 'Beefy' Smith Stuns Chris Eubank Jr With Fourth...
Liam Smith stunned Chris Eubank Jr at the Manchester Arena, stopping the pre-fight favourite in four [ ... ]
boxing
Poles Apart: Richard Riakporhe Stops Two-Time World Champion...
Richard Riakporhe scored the biggest win of his career so far, steamrollering former two-time world [ ... ]
boxing
Leave The Memories Alone: Kell Brook Shouldn't Return To Face...
Boxxer CEO Ben Shalom says former IBF welterweight champion Kell Brook is “desperate” to [ ... ]
boxing
Citizen Of The World Alex Dilmaghani Focused On Global Domination
“Why don’t they play football? This is a sport where you get hit and hurt. The way some [ ... ]
boxing
The Day Ali Talked A Suicidal Man Down Off The Ledge Of A Beverly...
Wilshire Boulevard in Los Angeles cuts right through the heart of Beverly Hills. One particularly famous [ ... ]
boxing
Lucrative February Showdown Between Jake Paul And Tommy Fury...
Could it be third time lucky for a blockbuster showdown between Jake Paul and Tommy Fury? Well, according [ ... ]
boxing
''I Shook Up The World!'': The Moment Cassius Clay Truly Became...
On what would have been his 81st birthday, it is only appropriate to pay tribute to the cultural [ ... ]
boxing
Chris Eubank Jr Vs Liam Smith: Everything You Need To Know
Chris Eubank Jr and Liam Smith kick off the New Year in style this weekend when they descend on the [ ... ]
boxing
How To Watch KSI Vs FaZe Temperrr: Undercard, Time, Venue And...
The show must go on. After Dillon Danis’ withdrawal, KSI will now fight gaming YouTuber FaZe Temperrr. [ ... ]
boxing
Australian Heavyweight “One Of The Frontrunners” To Fight Anthony...
Two-time heavyweight world champion Anthony Joshua is expected to return to the ring in April looking [ ... ]
boxing
KSI Vs FaZe Temper: Everything You Need To Know
KSI returns to the boxing ring this weekend as the latest Misfits card hits Wembley Arena. The YouTuber-turned-boxer [ ... ]
boxing
All Aboard: Get On The Jesse 'Bam' Rodriguez Hype Train Before...
You can count on one hand the boxers who had a better 2022 than Jesse ‘Bam’ Rodriguez. The [ ... ]
boxing
Women's Boxing Picks Up Where It Left Off In 2022 With A Huge...
If you thought women’s boxing was leaving its big, history-making nights in 2022 then think again. [ ... ]
boxing
Triple Threat: Eddie Hearn's Three-Fight Plan To Revive Anthony...
Matchroom Sport chairman Eddie Hearn has mapped out Anthony Joshua’s road to heavyweight redemption. [ ... ]