This article first appeared in The Sportsman on 20/01/21

His dominance on the floor literally changed the sport. He has been called ‘The NBA’s First Superstar’, ‘The Babe Ruth of Basketball’, and, simply, ‘Mr. Basketball’. He was a 6ft 10in centre from Joliet, Illinois who became a four-time NBA All-Star and five-time champion.

And he did it all wearing spectacles.

Seventy years after this heyday, his virtually patented practice has been imitated by elite, aspiring, and amateur basketball players everywhere, from the playground to the pros. The Mikan Drill appears simple enough, shooting from one side practically under the rim, catching it as it drops, switching sides and launching again from the exact position the ball has been caught. Left side: left knee, left hand lifted. Shoot. Right side: right knee right hand lifted. Shoot. And repeat, and repeat, and repeat. Keeping the ball high as a perfect finishing move for a big player, the drill was used for his dexterity around the basket.

It was named after George Mikan, and he’s probably the greatest basketball player you’ve never heard of. In 2022, if you want to find the world’s greatest basketball team, you need to look for the incumbent NBA champions holding the Larry O’Brien Trophy. That’s currently the Los Angeles Lakers. In the early 1950s, if you wanted to find the world’s greatest basketball team, you’re probably looking at the Lakers again. But instead of the west coast, move 2000 miles inland. Between 1949 and 1954, the Minneapolis Lakers were the winners of five of the six NBA Finals. And their star man was George Mikan. 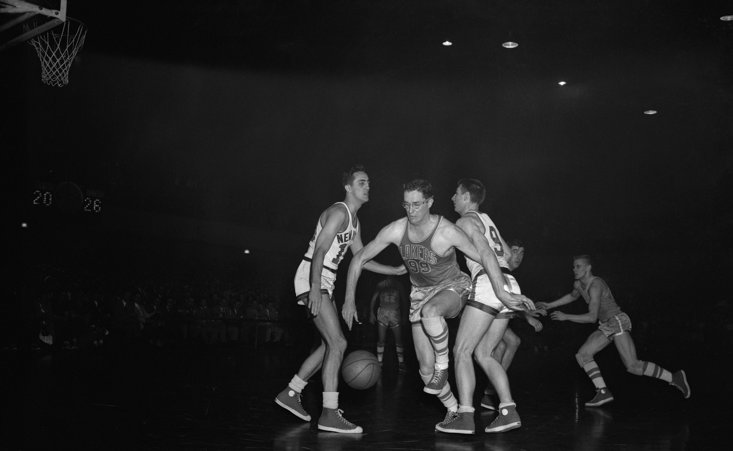 MIKAN WAS KNOWN AS THE FIRST SUPERSTAR OF NBA

He was the league’s scoring champion six years in a row, topping out with an average of 28.4 points per game, with The Associated Press later naming him the greatest basketball player of the first half of the 20th century, and in 1997 he was recognised as one of the 50 greatest in NBA history.

Mikan was so dominant that the game had to change for him.

One of the rules implemented to adapt to his game was the increasing of the three-second lane from six to 12 feet. The offensive three-second rule, also termed as a lane violation, simply states that an offensive player cannot stay inside the paint area without the ball for more than three seconds at a time.

“He was bigger than almost anyone else,” described legendary Boston Celtics coach Red Auerbach, “He had a wide body, he loved to play, and he was a prolific scorer.

“Mikan was a giant amongst men.”

His offence transformed the game. His ability to get a position on a defensive man virtually assured his buckshot would score, and it was on 20 January 1952 that Mikan scored a career-high 61 points, in a double-overtime win over the Rochester Royals. It was only the second 60-point performance in NBA history after Joe Fulks' 63 in 1949. But Mikan’s effect wasn’t just wins on the board. His potency and presence led to fundamental changes in the sport that still exist today. 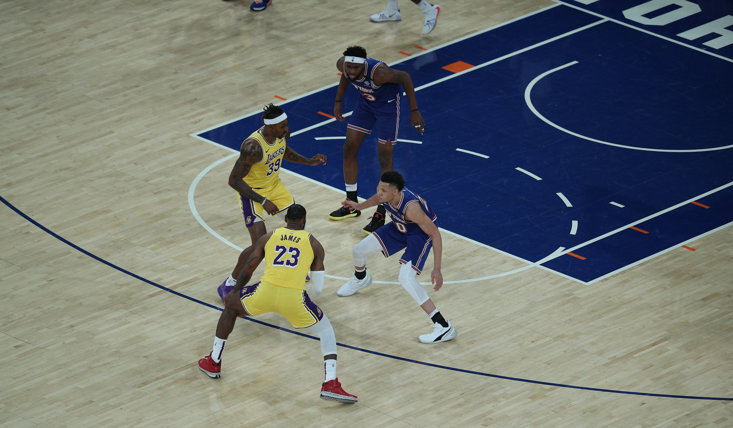 THE LANE VIOLATION RULE WAS INSTITUTED TO COUNTER MIKAN'S EXCELLENCE

The league also instituted the goaltending rule to keep him from swatting away every opposing shot at the basket.

“The goaltending rule came in because I used to go and stop the ball from going in the hoop,” Mikan himself would recall, “I could jump high enough!” The rule changes did little to nullify this talent or proficiency on the court, and it was his penchant for points that had a significant influence on the introduction of the 24-second clock. During one game in 1950, the Fort Wayne Pistons decided the only way they could win the game was to hold onto the ball and not let Mikan have it. The Lakers consequently lost the game 19-18, the lowest score in NBA history. Mikan did, however, bag 15 of them.

And though that might have been a nadir for the sport, George Mikan did much to drive up the profile of basketball. Mikan was, in the words of the NBA itself, ‘the Michael Jordan of his time’ as a sports celebrity. He was on the cover of every major magazine, endorsed everything from gum to beer and was featured on Edward R. Murrow’s “Person-to-Person” national TV show. At one point he was so popular that he was asked to attend a New York Yankees game to drum up support for the baseball team. One night in the early ’50s, the marquee at Madison Square Garden read simply: “Geo Mikan vs. Knicks.”

“Everyone wanted to see him,” Lakers teammate Slater Martin once recalled. “When George came to town, it was an event.” 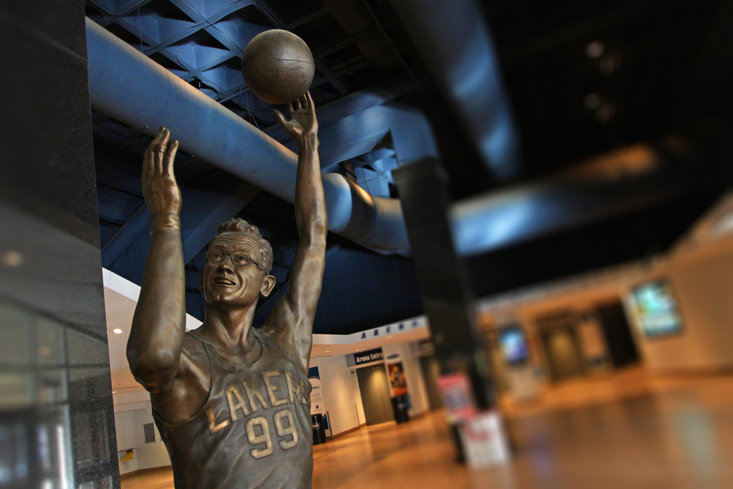 “Back in those old days, I’d arrive by train or plane a day or two ahead of the team to promote the game,” Mikan said at the 1997 All-Star Game gathering of the NBA’s 50 Greatest Players, “They’d take me to a hotel and I’d do interview after interview to try to drum up business and sell tickets.

“I never minded any of the extra obligations. You know, when you think about it, it was pretty good stuff for the big kid with the glasses who nobody thought would be able to play.

“Now all these years later, I’m just happy to have left my mark.”