Snooker
News
Murphy trails Selby ahead of Monday’s final two sessions in the clash for the £500,000 first prize at the Betfred World Snooker Championship
Hector Nunns
09:15, 03 May 2021

Shaun Murphy insists that the climax to the Betfred World Championship on Monday needs to be about a lot more than just winning.

The 38-year-old Murphy is chasing a second world title 16 years after his first at the Crucible Theatre in Sheffield and is up against three-time champion Mark Selby.

In an individual sport winning a prized world title, lifting the famous silver trophy and pocketing the £500,000 cheque tonight might mean everything to many – but not to Murphy.

Selby was warned for slow play in his semi-final win over Stuart Bingham, with the pair also hauled off early on Saturday afternoon and unable to finish at their scheduled time.

Bingham, another former winner, even levelled accusations of gamesmanship at Selby, swiftly refuted by the world No4.

Murphy trailed Selby 10-7 ahead of Monday’s final two sessions in the best-of-35 frame clash for the £500,000 first prize, having lost six of the last seven including a 40-minute last of the day.

He said, “Shaun Murphy the Showman is normally kept in check. But against Kyren Wilson in the semi-final I allowed him out for a couple of days, and he liked it.

“We are in a theatre, we are an entertainment industry. There is a responsibility on the players in the World Championship final to make it a real show.

“I feel that responsibility as a sportsperson, to marry that balance between performance and entertainment.

“Specifically on the speed of play there is a responsibility on the players to get on with it, but ultimately that is on the governing body to enforce.

“And I personally don’t like it being left to the judgment of referees stepping in and telling players to get on with it.

“Most referees haven’t played snooker to a high enough level to know the difference between a hard shot and an easy shot. 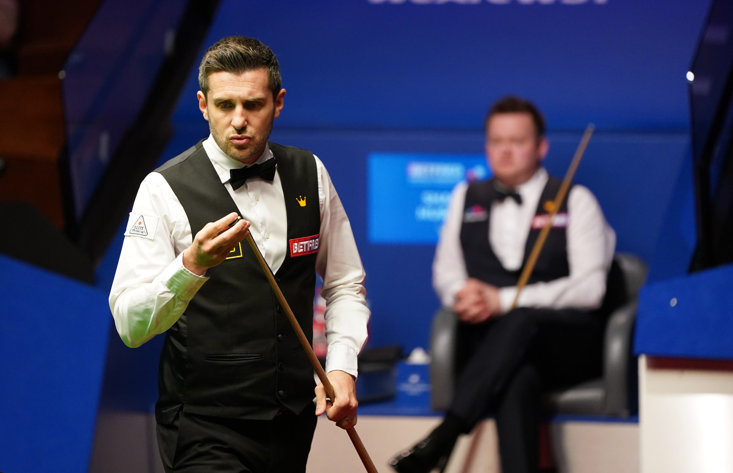 “So I think it should be taken away from the subjectivity of a single referee, and have always argued for a shot-clock – even at the World Championship.

“Not 15 or 20 seconds, longer than that at the Crucible. But punters will turn off and put Netflix on if it’s too slow.”

Selby, though, a winner of 19 ranking titles including his three Crucible successes and three Masters crowns, defiantly shrugged off the flak and told rivals ‘Show us your medals’.

Selby said, “I have never used gamesmanship in my life. In the final of course you want to play well. But if you’re not playing well, I’ll do whatever it takes to win.

“What’s the point of going out there just to entertain the crowd if you keep losing? It doesn’t make sense to me. Look at your CV.

“I don’t want people saying ‘He was great to watch…but he didn’t win anything’. If you think I’m boring, watch Coronation Street.”

The contest always looked like it would hinge on whether it was Murphy’s attack or Selby’s defence that came out on top.

And the Magician got off to a strong start, pouching the first two frames. However despite a break of 65 from Murphy, Selby managed to scramble one back and then level at 2-2 with a run of 89.

A break of 98 in the second frame of the evening put Murphy 6-4 up, but that seemed to provoke his opponent into a typical battling response.

Sponsors Betfred have already paid out the promised £25,000 to the Jessie May Trust charity once the tournament tally of century breaks passed 80. It is now up to a record 103 with two sessions remaining having broken the previous best of 100 set in 2019.

After coming off the table late on Sunday night, Selby said: "I felt a bit edgy at the start, it's a world final and I was trying that extra bit harder and Shaun started off a lot better than me.

"Every final I have been to, I have always felt really tired going into it but I have dug in today, grafted when I needed to and managed to get myself a lead."

Murphy said, "He was fabulous tonight. From good safety shots I thought I had played he always seemed to have the answer and potted some outrageous long balls.

"It's a frame easier than in 2005, but in all seriousness I think I have showed in the semi-final I can win when I am down. This match is a long way from being over."

The final two sessions are full to a capacity of 925 today, making it the first UK sporting event to have a sell-out since the Cheltenham Gold Cup in March 2020.