Three years ago in Melbourne, a disconsolate Andy Murray addressed the media and struggled to convey his anguish regarding a dreich outlook.

The Scot's troublesome hip had become intolerable, and his trophy-laden career had entered the final chapter. His unwavering commitment to his craft had taken its toll on his aching body, and retirement loomed.

Through tears and sorrow, Murray hesitantly mentioned the possibility of further hip surgery. His tone was sombre, but it offered his supporters a glimmer of hope.

Murray encountered Roberto Bautista Agut in the first round at the Australian Open. He strained every sinew and hobbled and winced for the duration, but a spirited performance ended in defeat and a standing ovation.

He left the court a beaten man, yet his perspective had brightened. His mood had lifted, and he eventually opted for surgery in an attempt to prolong his time in the sport he adores.

Murray underwent successful hip resurfacing and returned to action after a prolonged spell on the sidelines - and he is now, remarkably, just days away from returning to the scene of his impromptu retirement ceremony.

His comeback has been discontinuous, impacted by niggling injuries and the COVID-19 pandemic, and momentum has proved difficult to capture. His victory in Antwerp two years ago - the 46th time he’s collected silverware - provided the standout moment of his return.

He maintained a rare period of optimum fitness in the final six months of last year, and there was an upturn in performances despite mixed results.

Stringing consecutive victories together has proved problematic for the former world No.1. Uplifting displays have tended to be followed by lacklustre and disjointed showings, and he’s not made the headway anticipated.

Murray, a top-class operator, has shown his ability to challenge the elite remains. He rocked Stefanos Tsitsipas in New York and dismissed Jannik Sinner in Stockholm, but his matches are rarely swift affairs. 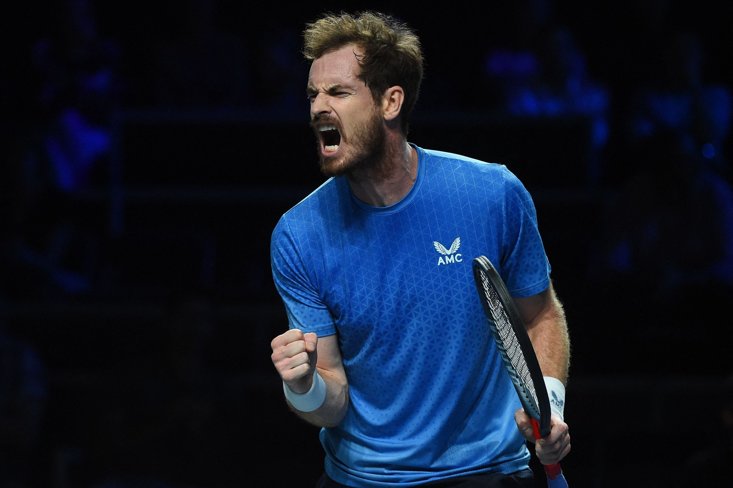 Murray was never a stranger to protracted duels, but they have become more frequent recently. A killer-instinct has evaded him at critical junctures, and he is regularly embroiled in arduous tussles.

The three-time major winner is predominantly a cautious performer. He prefers to absorb pressure and respond on the counter-attack – and it is a philosophy that has served him well. A more aggressive approach in the closing stages of his career is necessary though, and he recognised the need for change.

Murray has hired Jan De Witt in a coaching capacity, replacing Jamie Delgado, to provide a different perspective and implement fresh ideas. The Scot also has a new racket in his bag for the first time in 20 years, and he is hoping to reap the benefits from a larger frame.

The racket will be more forgiving and assist his need for greater power, and the early signs are encouraging. A productive week at the Sydney International has reinforced his belief that alterations made in pre-season have been beneficial.

Murray will commence his Australian Open campaign against the No.21 seed, Nikoloz Basilashvili. He defeated the uncompromising Georgian earlier this week, and another physical battle is pending.

The five-time runner-up will be targeting a spot in the second week, although it is unclear whether his body can support his ambitions. Avoiding energy-sapping clashes in the early stages is key to his hopes, and a clinical start is required.

An encouraging Australian Open would tee the Brit up nicely for the season ahead. If he can avoid further setbacks, positive results will inevitably follow, and his ranking will gradually reflect his quality.

His short-term prospects provide optimism, which has seldom been the case in recent years. With a new coach in the stands and a new bat in his hands, he has shown a willingness to adapt and evolve - and he has little to fear as his confidence returns.

x
Suggested Searches:
Manchester United
Liverpool
Manchester City
Marcus Rashford
Premier League
More
tennis
Great Britain See ATP Cup Semi-Final Hopes Dashed After Canada...
Great Britain saw their hopes of reaching the ATP Cup semi-finals dashed by Canada on Thursday at the [ ... ]
tennis
Defending Champion Naomi Osaka Returns To The Australian Open...
Japanese tennis star Naomi Osaka just wants to have fun and who can blame the former world number one, [ ... ]
tennis
Why The Australian Open Might Be Better Off Without Federer,...
Aussie tennis star Nick Kyrgios has said that no ‘Big Three’ of Novak Djokovic, Roger Federer [ ... ]
tennis
A Perfect Blend Of Youth And Experience Make Up Our Tennis Stars...
The new tennis season is fast approaching, just a few short weeks after the previous campaign ended, [ ... ]
tennis
Andy Murray Can Roll Back The Years When He Returns To The Australian...
With 2021 drawing to a close, not only are we about to enter a new year but it signals the imminent [ ... ]
tennis
The Greatest Qualifier & The Greatest Ever? The Best Tennis...
The tennis landscape is beginning to change. Roger Federer and Serena Williams, legendary performers [ ... ]
tennis
Emma Raducanu Named BBC Sports Personality Of The Year For 2021
Emma Raducanu has been named the BBC Sports Personality of the Year after her incredible breakthrough [ ... ]
tennis
SPOTY 2021: Likely Winner Emma Raducanu Has Been The Success...
Barring a massive surprise, Britain’s teenage sensation Emma Raducanu will lift the BBC’s [ ... ]
tennis
Daniil Medvedev Leads Russian Tennis Federation to Davis Cup...
Daniil Medvedev brought an extraordinary personal and team year of success to an end by leading the [ ... ]
tennis
WTA Pull Women’s Tennis Tournaments From China Over Peng Shuai...
The governing body of women’s tennis sent the strongest possible message to Chinese authorities [ ... ]
tennis
Johanna Konta Retires Having Carried The Baton For British Tennis
Johnna Konta, the former British number one and Wimbledon semi-finalist, has called time on her tennis [ ... ]
tennis
Great Britain Lose In Agonising Fashion To Germany In Davis...
Great Britain saw their Davis Cup hopes dashed in Innsbruck on Tuesday night in agonising fashion as [ ... ]
tennis
Salisbury And Skupski Take GB Into Davis Cup Quarters After...
Great Britain clinched their place in the Davis Cup quarter-finals on Saturday afternoon with a hotly-contested [ ... ]
tennis
Cameron Norrie And Dan Evans Get GB Davis Cup Campaign Off To...
Great Britain got their Davis Cup campaign off to a winning start on Saturday by taking the opening [ ... ]
tennis
Zverev Wins ATP Finals Title To Cap Incredible 2021
Alex Zverev stormed to a second ATP Finals title in grand manner, beating world No2 and defending champion [ ... ]
tennis
Garbine Muguruza Becomes First Spaniard To Win WTA Finals
Garbine Muguruza is the first Spanish woman to win the WTA Finals end-of-season tournament after a straight [ ... ]
tennis
Norrie Ready For First Clash With Djokovic Despite Opening Defeat...
After receiving a late call-up as an alternate for his debut appearance at the glamorous ATP Finals, [ ... ]
tennis
WTA Finals SF Preview: Debutants Seize Their Moment In Mexico
The WTA Finals debutants have certainly grabbed their opportunity this year. From the semi-final line-up [ ... ]
tennis
Is It Time For Roger Federer To Consider His Retirement From...
Roger Federer is not only one of the greatest tennis players of all time, but one of the greatest athletes [ ... ]
tennis
ATP Finals Preview: Novak Djokovic Bidding To Match Roger Federer...
No London, no Roger Federer, and no Rafael Nadal – but the Nitto ATP Finals in its new home of [ ... ]
tennis
Raducanu’s Promising Partnership With Beltz Will Add Stability...
She promised that she would have a coach in place by the end of the year and now it is confirmed, with [ ... ]
tennis
Djokovic Eclipses Sampras, But Why Isn't He Loved Like Nadal...
Novak Djokovic just can’t stop breaking records as he looks to eclipse the fellow greats of this [ ... ]
tennis
Australian Open Up In The Air As Host Nation Remains Divided...
The Australian Open is just under three months away and there is still doubt over what is going to happen [ ... ]
tennis
Emma Raducanu Needs Patience And Breathing Space To Reach Full...
Despite having already won a Grand Slam title, rising tennis star Emma Raducanu has stressed that [ ... ]
tennis
Another Brilliant Brit: Cameron Norrie Achieves Career High...
This is truly a unique moment in modern British tennis. Just five weeks on from Emma Raducanu’s [ ... ]
tennis
Raducanu Needs To Tread Carefully In These Early Days As Tennis'...
After falling at the first hurdle in Indian Wells last week, tennis’ golden girl Emma Raducanu [ ... ]
tennis
Cameron Norrie Sets Novak Djokovic Target After Breakthrough...
Cameron Norrie is flying this season. Now into his first ATP 1000 Masters quarter-final, in which he [ ... ]
tennis
Zverev Provides Andy Murray With A Litmus Test As Part Of His...
Sir Andy Murray has been one of Britain’s greatest athletes of this generation and while his achievements [ ... ]
tennis
How The Rest Of 2021 Is Shaping Up For US Open Champion Emma...
Everybody wants to watch Emma Raducanu. In the space of just a few months she has gone from relative [ ... ]
tennis
Media And Ex-Pros Need To Follow Andy Murray's Lead Over Emma...
The UK is still basking in the triumph of 18-year-old Emma Raducanu at the US Open over a week ago, [ ... ]