They have been waiting for over a decade, but the Phoenix Suns have finally reached the Western Conference finals with a resounding 4-0 series victory over Denver Nuggets.

Last appearing in the finals in 2010, the Suns’ 125-118 triumph over the Nuggets saw them complete the clean sweep and set up a winner-takes-all clash against either Utah Jazz or Los Angeles Clippers.

Despite their long wait coming to an end, the main talking point of the match wasn’t surrounding Monty Williams’ men, with NBA MVP Nikola Jokic ejected late on in the third quarter. A reckless swipe in an attempt to steal the ball from Cameron Payne saw him strike Cameron Payne in the face, with a melee breaking out in the aftermath of ‘The Joker’ being dismissed.

Jokic and the Suns’ Devin Booker, who claimed an impressive 34 points and 11 rebounds, had to be separated by members of each team after squaring up to each other following the incident. It was a disappointing end to what has been an incredible season for the Serbian, who last week became the lowest draft pick (41) to be named MVP. 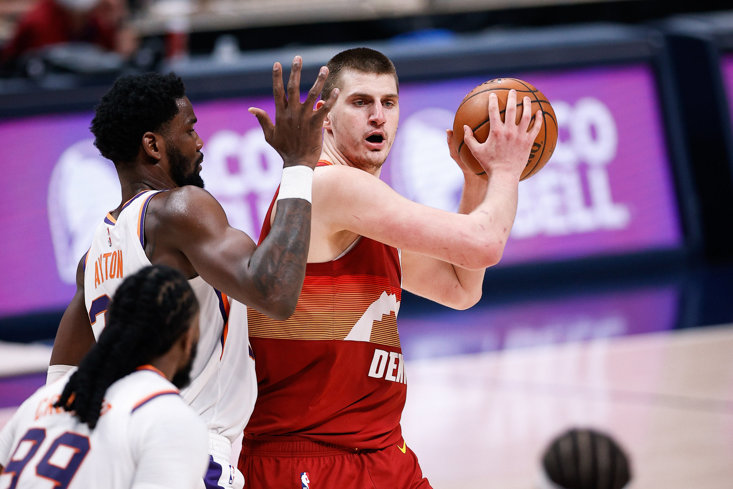 At the time of Jokic’s ejection, he had acquired 22 points and 11 rebounds with Will Barton leading the Nuggets charge with 25 points.

Speaking after the match, the 26-year-old revealed his frustrations. "I wanted to change the rhythm of the game, I wanted to give us some energy, maybe change the whistle a little bit, so I wanted to make a hard foul," Jokic admitted. "Did I hit him, did I not hit him? We don't know. So I say sorry if I did because I did not want to injure him or hit him in the head on purpose.

“I thought honestly they would not eject me.”

That was a sentiment echoed by his coach, with Michael Malone adding, "I just didn't feel like it warranted a flagrant-2 ejection because he's making a play on the ball.

"There's marginal contact to Cameron Payne's nose I believe. I was shocked. I'm still a little bit shocked that they called a flagrant 2 and ejected the MVP on such a play.

"From my vantage point and watching the replay, I did not think it was a non-basketball play with malicious intent.

"I think it was a frustration foul. Nikola probably felt the last couple plays when he had the ball he had not received a foul call. And he went over there to take a foul. Which he has done plenty of times. A lot of players do that."

Speaking after his sides’ victory, Nuggets coach Williams also admitted his surprise at seeing the MVP given his marching orders.

He added, “I didn't really think it was anything malicious.”

In the Eastern Conference, the Milwaukee Bucks levelled their semi-final series at 2-2 with a convincing 107-96 win over the Brooklyn Nets as Giannis Antetokounmpo matched his own play-off high score with 34 points and 12 rebounds.

x
Suggested Searches:
Manchester United
Liverpool
Manchester City
Marcus Rashford
Premier League
More
us-sports
NFL Week 7 Preview - Arizona Cardinals To Stay Unbeaten?
The NFL never fails to throw up surprises, and this year is no different. As the season enters its seventh [ ... ]
us-sports
NBA Eastern Conference: Nets Face Early Obstacles As Bucks Eye...
The Eastern Conference is always astounding. Whether it’s Cleveland disrupting Golden State after [ ... ]
us-sports
NBA Western Conference: Lakers Looking For A Dynasty?
The NBA returns to our screens next Tuesday night/Wednesday morning, with the curtain-raiser for the [ ... ]
us-sports
The Moments That Cemented David Stern’s Legacy As The NBA's...
The late David Stern moulded the NBA into what it is today, dealing with some of the NBA’s incredible [ ... ]
us-sports
Everything You Need To Know About The Opening Weekend Of The...
The NFL season gets underway this week and the road to Super Bowl LVI starts now.  32 teams will [ ... ]
us-sports
Untold: Malice At The Palace Is Netflix’s Best Sports Doc Since...
It feels like a lifetime since those early days of the pandemic when many of us became completely obsessed [ ... ]
us-sports
NBA Draft 2021: The Trades And Stars Of The Future To Watch
Every year, America shows the world how the next-generation of athletes can be wedged into the top-flight [ ... ]
us-sports
“Special Leader” Antetokounmpo Inspires Bucks To First NBA Title...
Giannis Antetokounmpo scored 50 points as the Milwaukee Bucks secured their first NBA title since 1971 [ ... ]
us-sports
Fear The Deer: Giannis’s Milwaukee Bucks One Win Away From NBA...
The year was 1971. Disney World has opened its doors to the world. Sean Connery returned to the Bond [ ... ]
us-sports
Giannis Antetokounmpo's Incredible Block Helps Bucks Tie Up...
Sir Alex Ferguson summed it up best when he said “Attack wins you games, defence wins you [ ... ]
us-sports
Milwaukee Bucks Vs Phoenix Suns Could Be The Most Compelling...
And then there were two. This week sees the Milwaukee Bucks and the Phoenix Suns kick off their best-of-seven [ ... ]
us-sports
50 Years After Only NBA Title Win, The Milwaukee Bucks Are On...
The Milwaukee Bucks moved to within one game of their first NBA Finals appearance since 1974 with a [ ... ]
us-sports
Suns' Return To NBA Finals After 28 Years Will Be Their Best...
The Phoenix Suns are in the NBA Finals for the first time since 1993 after finishing off a 4-2 West [ ... ]
us-sports
LA Clippers Beat Phoenix Suns 116-102 To Keep Their NBA Finals...
The Los Angeles Clippers kept their hopes of a first ever NBA finals appearance alive with a 116-102 [ ... ]
us-sports
Khris Middleton Shines As Milwaukee Bucks Take 2-1 Series Lead...
Khris Middleton netted 20 fourth quarter points to turn game three on its head and lead the charge as [ ... ]
us-sports
NBA Conference Finals: Phoenix Suns To Continue Hot Streak Against...
Last season’s Disney-hosted NBA Playoffs are firmly in the rear-view mirror as this season’s [ ... ]
us-sports
Kevin Durant Display Against Bucks Cements His Place As An All-Time...
“GREATNESS,” wrote LeBron James on Twitter in the aftermath of the Brooklyn Nets’ [ ... ]
us-sports
Once Second-Best To Taco Bell, Nikola Jokic Is Now The Very...
Nikola Jokic’s rise to the summit of the NBA has been like no other. The Serbian has now joined [ ... ]
us-sports
Has Father Time Finally Caught Up With LeBron James?
All great athletes have an expiry date. Muhammad Ali broke the hearts of millions as he was retired [ ... ]
us-sports
On This Day, Michael Jordan's Chicago Bulls Humiliate Utah Jazz...
The greatest defensive game of all time? Quite possibly. On this day in 1998 Chicago Bulls put on an [ ... ]
us-sports
NBA Playoffs: Lakers On The Verge Of Elimination As Jazz And...
The Los Angeles Lakers need to win the final two games of their NBA Playoff First Round series [ ... ]
us-sports
Baseball Passes Two Million Runs, But Nobody Seems To Know When!
A baseball milestone was reached on Friday night. The same landmark was hit on Saturday. And it won’t [ ... ]
us-sports
Thursday's NBA Playoffs: Your Full Guide To The First Round...
The NBA playoffs are now very much in full swing as the Los Angeles Lakers fight it out with 15 other [ ... ]
us-sports
Aaron Rodgers Destined To Leave Packers As Relationship Reaches...
He’s a three-time MVP adored by his fan base, the face of the franchise in the modern era and [ ... ]
us-sports
NBA Playoffs: Your Game-By-Game Guide To Saturday's First Round...
Following a thrilling inaugural play-in tournament, NBA’s playoffs get into full swing on Saturday [ ... ]
us-sports
Turnbull No-Hitter Puts MLB Well On Course To Smash All-Time...
It would appear that 2021 is Major League Baseball’s ‘Year of the No-Hitter’. Detroit [ ... ]
us-sports
NBA Champion Lakers Host Warriors In Thrilling New One-Game...
The Los Angeles Lakers host the Golden State Warriors in a one-game head-to-head to qualify for the [ ... ]
us-sports
Brady's Buccaneers To Host The Cowboys in Week 1 Of The New...
Defending Super Bowl champions the Tampa Bay Buccaneers will begin their 2021 NFL season by hosting [ ... ]
us-sports
Utah Jazz Face Big Test Against LA Lakers In Surprise Bid For...
The Utah Jazz are the ultimate mid-level NBA team. They had great success in the nineties due to the [ ... ]
us-sports
Better Than Jordan, Tiger And Messi? Nobody Has Dominated A...
It was meant to be Tom Brady versus Patrick Mahomes. In the end, we just had further proof that the [ ... ]