When Josh Alexander steps into the ring with IMPACT World Champion Christian Cage tonight, first-time watchers will notice the challenger wearing amateur wrestling headgear. These are commonplace at competitions like the Olympics, and it would seem like perhaps “The Walking Weapon” is wearing it to signpost his own amateur background. However, as he prepares for the biggest match of his career in the main event of IMPACT Wrestling’s Bound For Glory, Alexander told The Sportsman the gruesome reason for this piece of attire.

"When I first started wrestling, I never wore headgear. I was just like a talented blue-chip prospect, the blond hair, blue eyes and I’d come out in my singlet and wrestle as good as I can. I didn't really have any sense of identity. I suffered an injury in 2012, I got kicked in the ear. I always had cauliflower ear, but this one was extreme. My ear swelled and it split. My ear was falling down on my neck. I had to go to the hospital, and they had to surgically repair my ear and stick it to the side of my head.

The doctor said, 'you can't do anything to aggravate it for three to six months.' And when he said that, I was like, I have a booking in two weeks, I have to wrestle on a show. So I just ordered headgear online."

Long-time wrestling fans will recall other famed grapplers wearing the traditional amateur headpiece. Kurt Angle wore one for a famous spell, to hold a comedic wig in place after losing his hair in a match with Edge. The most iconic proponent was ‘The Dog-Faced Gremlin’ Rick Steiner, an 80s and 90s powerhouse who used to bark while in the ring. This connection was not lost on fans the first time Alexander wore his new gear.

"I remember I went out and like, the crowd was barking at me. And they were like ‘nice headphones!’. They were chirping me every chance they got. But by the end of the match, they were all applauding. I remember (current AEW star and Josh’s former tag team partner) Ethan Page was there, and he pulled me aside. He said, “You can never get rid of that headgear! You look like a badass, and it sets you apart.

When fans go home from that show, they might not remember my name. They might not remember my moniker. But they'll be like that guy with the headgear was a badass, it was that one little identifying thing that I could have. And I was just like, I'll try it for a little bit but it's nine years later, and I don't see myself ever being without it now." 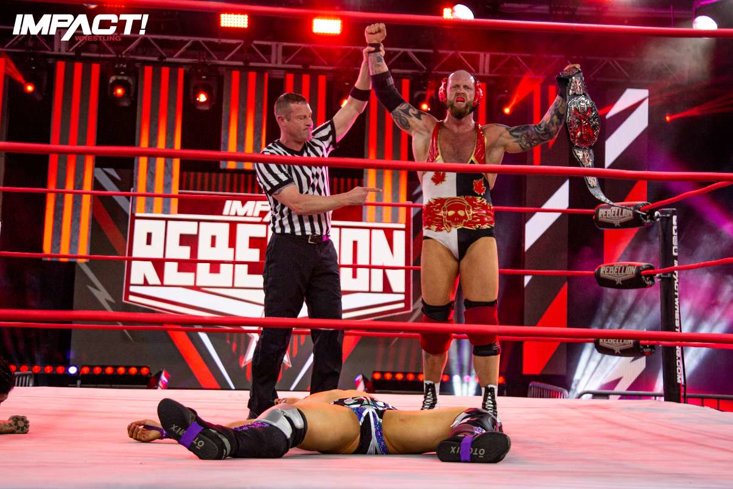 To set up his anticipated match with Christian Cage, Alexander invoked ‘Option C’. This is a ruling that allows IMPACT’s X-Division champion to essentially exchange that title for an opportunity at the world belt. A tremendous risk, only two of the five former X-Division kings to take this route have clinched the ultimate prize. But for Josh, it was simply a show of faith in his abilities.

"I still haven't wrapped my head around the position I'm in. I was X-Division champion one day and then all of a sudden now I have no championships. I've really just done all this to bet on myself. So I'm taking the biggest risk of my entire career for the biggest reward. I figured at this point in time I'm sixteen years into my wrestling career. I've done a lot in the X-Division, I think I've established myself as one of the better X-Division champions there's been in recent memory. I need to see if I'm capable of being a main eventer. I need to see if I'm capable of being a world champion. I saw Christian Cage and I saw an opportunity. I get to see if I could do all those things against one of the greatest of all time. One of the people I looked up to when I was 10 years old."

In the opposite corner tonight will stand Christian Cage. A true legend in a sport where that word has become overused, Christian has reigned as a champion everywhere he has been and rose to pro wrestling icon status by virtue of the WWE’s series of Tables, Ladders and Chairs matches. Teaming with Edge, Christian faced The Hardy Boyz and The Dudley Boyz in a violent set of scraps that have gone down in wrestling legend. Still going strong into middle-age, Christian has inspired wrestlers like his fellow Canadian, Josh Alexander.

"Just the fact that he's 47 blows my mind because he's moving around like the guy I saw sixteen years ago when he first won the Impact World Championship. It's crazy to have a guy with so much experience, who's done everything there is to do in wrestling, come back. He has the same amount of enthusiasm as somebody like Ace Austin who's 22 years old and just getting started with his career."

Whatever the outcome tonight, Alexander is fully deserving of his chance to headline a major event. Should he leave with the world title, he will have earned it. If he walks away with both ears, that’s a bonus.