Cologne/Mönchengladbach. The people emerging onto platform four in the Cologne suburb of Ehrenfeld weren’t immediately recognisable as football supporters. In fact, given that 1.FC Köln were still playing at home a couple of kilometres away, there was no reason to believe they liked football at all.

Once the regional train to Mönchengladbach pulled in however, many of them began to withdraw scarves from their pockets or from inside their coats. Some were red tinged with black, others black and white with green trim – unfamiliar colour combinations in this particular city.

“There are not that many of us who openly show our colours,” laughed Matthias, a Bayer Leverkusen supporter en route to his team’s opening Bundesliga game away at Borussia Mönchengladbach. “You go into pubs and you watch your games and some of the Cologne fans make fun of you a bit.

“If you’re looking for trouble, you can probably find it but it’s usually ok if you pick the right places.
There are supporters of many different clubs in Cologne due to migration from different parts of Germany.”

Including Borussia Mönchengladbach, Germany’s sixth biggest club in terms of members who are found all over the country, a legacy of the Foals’ domestic and international glory years in the 1970s.

And so, in one of several bustling pubs down the high-street in Rheydt, just outside Mönchenglabach, the “Spree-Borussen” from the River Spree in Berlin could be found sat at a table across from the “Stiefel-Borussen” from the Stiefel pub in central Cologne.

Matt Ford
@matt_4d
Next stop: #Mönchengladbach, where the odd pre-match Altbier appears to have been consumed.
What do Gladbach fans think of #Leverkusen? “Nothing. A completely irrelevant club.” 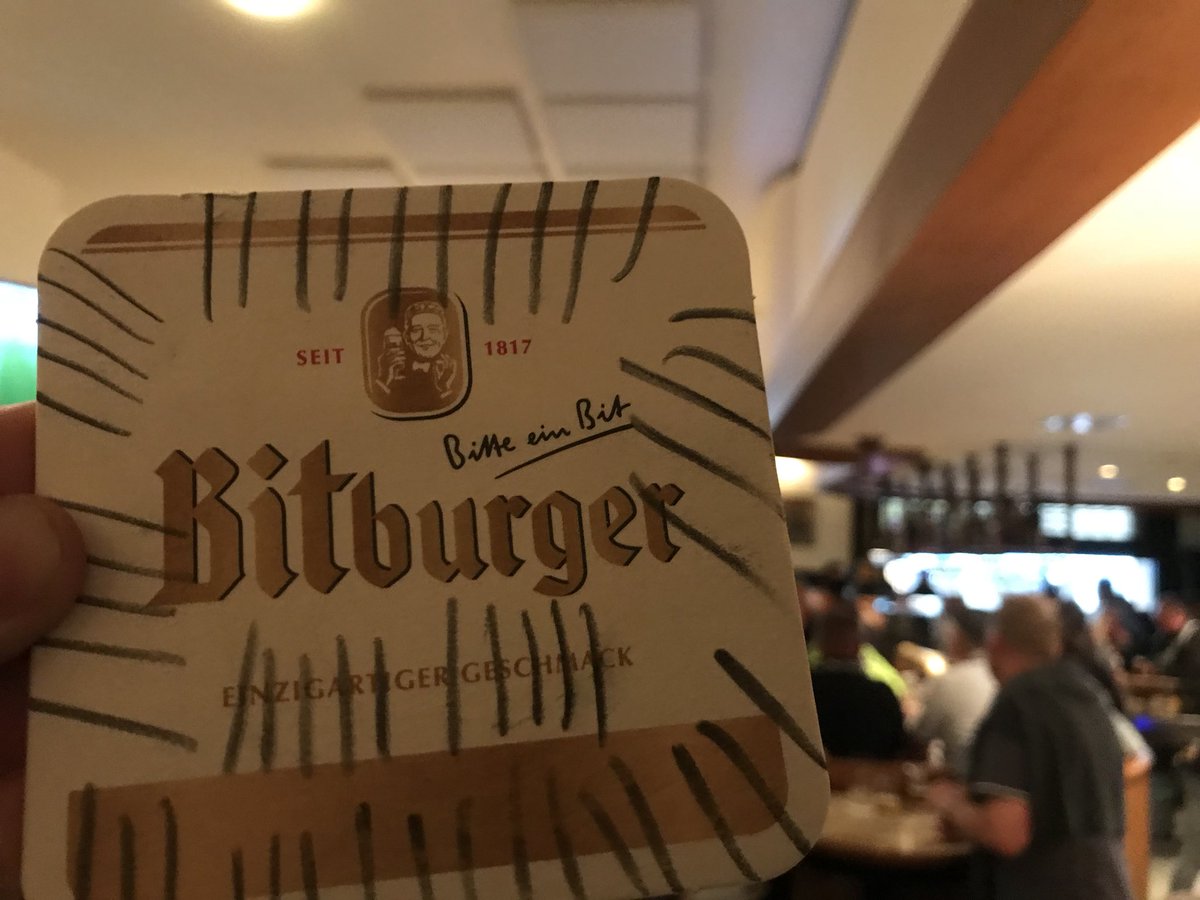 But what do the Gladbach fans think of Leverkusen? “If you hate a rival club, then at least that’s recognition,” opined one Gladbach supporter, referring to their relegated arch-rivals. “But Bayer Leverkusen? I feel nothing. They’re completely irrelevant.”

Leverkusen fans are quite content remaining under the radar. “Cologne is huge city, Düsseldorf is a huge city, and we’re sandwiched in between,” explained one hardcore supporter who was among the few hundred Leverkusen fans who travelled to the UEFA Cup final second leg against Espanyol in Barcelona in 1988. “Then there’s Gladbach, Dortmund and Schalke nearby. For the size of the town we come from, we do ok.”

Indeed, while the seating section of the away end remained half-empty, the vocal standing block was completely full. And they thought they were about to see their team take the lead after a quarter of an hour when Kevin Volland’s cross found Leon Bailey unmarked at the back post, but the Jamaican’s header came back off the crossbar.

On paper, Leverkusen boast a formidable attack with striker Lucas Alario and winger Julian Brandt complementing Volland and Bailey, plus the creative Kai Havertz in midfield. It’s quality which gives fans confidence that the Werkself can return to the Champions League after agonisingly missing out on goal difference last season.

“It’s definitely possible but we’ll need a bit of luck,” said Matthias. “We did well last season, but we ran out of steam towards the end. Some people have been saying we can even come second but I don’t know about that. Fourth will be fine.”

But they’ll need to be more clinical than they were against their Rhineland neighbours, who began to take control of the game. New signing Alassane Plea, (€23m from Nice) started on the bench but when Brazilian forward Raffael is on form, Gladbach always look dangerous.

Replacement Leverkusen goalkeeper Ramazan Özcan kept his side in the game when he saved Thorgan Hazard’s penalty just before half-time but he had no chance when the referee again pointed to the spot in the second half, Jonas Hofmann firing home to give Gladbach the lead.

Five minutes later, it was two as Raffael and Fabian Johnson passed their way through the Leverkusen defence, the German-American finishing off a clever move and getting the Foals off to a perfect start.

But would they sing it on platform four in Ehrenfeld once they got back home?

Matt Ford
@matt_4d
FT: Borussia Mönchengladbach 2-0 Bayer Leverkusen
#Bundesliga #bmgb04
3
14
More
football
The Secret Behind The Success Of Lineker, Shearer And Wright's...
The unavoidable hiatus to the broadcast of the BBC’s flagship football programme will not deny [ ... ]
football
Neymar Jr... Junior! Santos Like The Look Of Ronaldo-Imitating...
On March 7 2009, a slightly-built 17-year-old from Mogi das Cruzes, São Paulo, walked out onto [ ... ]
football
Business As Usual: A Beginners Guide To The Belarus Premier...
If you’re going out of your mind without your football fix, well we’re sorry you just haven’t [ ... ]
football
Why June 30 Could Be D-Day For The Fate Of Premier League Season
England captain Harry Kane has added his voice to the growing calls for the Premier League season to [ ... ]
football
You Heard It Here First - Brescia's Sandro Tonali Is Italy's...
Since winning the World Cup in 2006, it has been turbulent time on the international stage for Italy. [ ... ]
football
A Reunion With Ancelotti Could Resurrect Rodriguez's Stuttering...
No club chews up and spits out world class players quite like Real Madrid. Yet, their sense of entitlement, [ ... ]
football
'Quickly Kevin' Is The 90s Football Nostalgia Podcast To Beat...
While the majority of sports podcasts scramble to fill the minutes within the disruption of the [ ... ]
football
Where Did It All Go Wrong For Phil Neville And The Lionesses?
Winning, Phil Neville recently said at the SheBelieves Cup, is what would bring England’s women [ ... ]
football
''Drop A Few Hand Grenades'' Keegan's Advice To Scholesy The...
A packed out Wembley roared like one of those indomitable Three Lions to greet England’s new messiah. [ ... ]
football
Rise Of The Couch Coach: Coronavirus Causes 119% Surge In Football...
Thousands of us are flocking to virtual reality and gaming to help fill the void of no live football, [ ... ]
football
Review: Diego Maradona - Drop Yourself Into The Great's Chaotic...
When Diego Armando Maradona arrived at Napoli in 1984 for a world-record fee, the entire city ground [ ... ]
football
Arsenal's Tough Choice - Is Donyell Malen The Ying To Aubameyang?
Arsenal’s inability to manage the contractual situations of their biggest stars has plagued them [ ... ]
football
Robbie Fowler Is Making His Mark As A Manager With Brisbane...
The curtains came down on one of the last bastions of football standing in 2020 this week. Before the [ ... ]
football
Long Live The King: Eric Will Always Be Manchester United's...
“If ever there was one player, anywhere in the world, that was made for Manchester United, it [ ... ]
football
I Was There - The Day Football Came Home To Wembley
The closest I ever got to attending the original Wembley Stadium was on its final day in operation in [ ... ]
football
'Sunderland Til I Die' Heads To The Boardroom In Netflix's Second...
The docks have been left deserted. The wealth has dried up. Wearside has become an impoverished place [ ... ]
football
How Chief Creator Silva Became New Face Of Premier League
Football has been cast into uncertainty by the coronavirus pandemic. As it stands, nobody is sure if [ ... ]
football
Lookback:Chelsea 6-0 Arsenal When Arsene's 1000th Game Went...
It was supposed to be an occasion to celebrate for Arsene Wenger, but his 1000th game in charge of Arsenal [ ... ]
football
Ronaldo, Kane, Hazard - The Winners And Losers Of Euro 2020...
So as of this week Euro 2020 became Euro 2021. Another casualty of the global Coronavirus epidemic. [ ... ]
football
Time To Act And Move The Premier League Transfer Window
When my husband had an ear infection, I used my medical knowledge to help him. I said the best thing [ ... ]
football
Southgate Shows Strong Leadership With Rallying Cry To Fans
England head coach Gareth Southgate has sent a rousing message to national team fans as football continues [ ... ]
football
Lookback:Spurs And Chelsea's Eight Goal Thriller
In the three full seasons of Jose Mourinho’s first spell as the club’s manager, Chelsea [ ... ]
football
Take Your Pick - The Premier League Season Ending Scenarios
There are far more pressing concerns than football at the moment, as Jurgen Klopp so eloquently pointed [ ... ]
football
Premier League Clubs Must Be Less Karren And More Klopp Right...
We all know a Karen, don’t we. The proverbial I need to speak to the manager type, and while most [ ... ]
football
PSG Will Never Win Big If They Continue To Be Mentality Midgets
These days, everyone is in need of a laugh, so if you’re not aware of the @NoContextHearn account [ ... ]
football
Blackpool, Video Games And Escapes - How Footballers Have Dealt...
That date of April 3 for the Premier League to resume is looking increasingly optimistic day to day.  [ ... ]
football
Here Are The Meetings That Will Shape A Pivotal Week In The...
Coronavirus has completely destroyed the sporting calendar and led to most events being either completely [ ... ]
football
Elbow Bump! Leyton Orient Are Using FIFA 20 To Bring The Football...
With almost all football suspended for the next few weeks and with boredom already creeping in, one [ ... ]
football
Premier League Hall Of Fame Event Cancelled Due To Covid-19...
The Premier League’s first two inductions into a new Hall of Fame are set to be postponed after [ ... ]
football
Sancho’s Time At Dortmund Made Him A Pioneer - Jude Bellingham...
Results haven’t shown it, and there are fair questions surrounding his tactical approach and leadership, [ ... ]
This website uses cookies
Cookies help us and our partners provide statistics. By browsing this website, you consent to the use of cookies in accordance with our Privacy Policy and Cookies Policy.
Accept & Close