26 years ago today, a Prince was crowned king. ‘Prince’ Naseem Hamed stopped Wales’ Steve Robinson to capture the WBO featherweight championship, kicking off a journey that would see ‘Nas’ bewitch the boxing world. A flamboyant blur of speed and skill, with an arrogant and unconventional style, Hamed was the ultimate boxing showman. And it all started in the driving rain in Cardiff.

Cardiff Arms Park was the site for the coronation of the ‘Prince’. Steve Robinson was coming into the fight as an unlikely but popular hometown champion. ‘The Cinderella Man’ carried a meagre 13-9-1 record when he took a shot at the vacant WBO strap against John Davison on two days’ notice. Against seemingly insurmountable odds, he prevailed via split-decision. Defying the formbook further, he then made seven successful defences of the belt as he grew into his role as champion of the world. Steve Robinson is one of boxing’s true fairytale stories. But ‘Prince’ Naseem Hamed doesn’t believe in fairytales.

What followed was a demolition. The precocious challenger boxed with his hands by his sides, relying on incredible head movement to evade Robinson’s punches. He slashed the home fighter with combinations to head and body, thrown at incredible speed. Robinson would travel to the canvas in round 5. In round 8, he would travel back to his corner as a former champion. The referee had stopped the fight after a savage Hamed hook, the ‘Prince’ was now a king.

Naseem would make the featherweight division his plaything for the next several years. He stopped the great five-time champion Manuel Medina in 11 rounds. Tom ‘Boom Boom” Johnson, the American IBF champion, travelled to London and left his title behind after another Hamed knockout. Most thrillingly, he contested a fight for the ages with Kevin Kelley on his American debut. 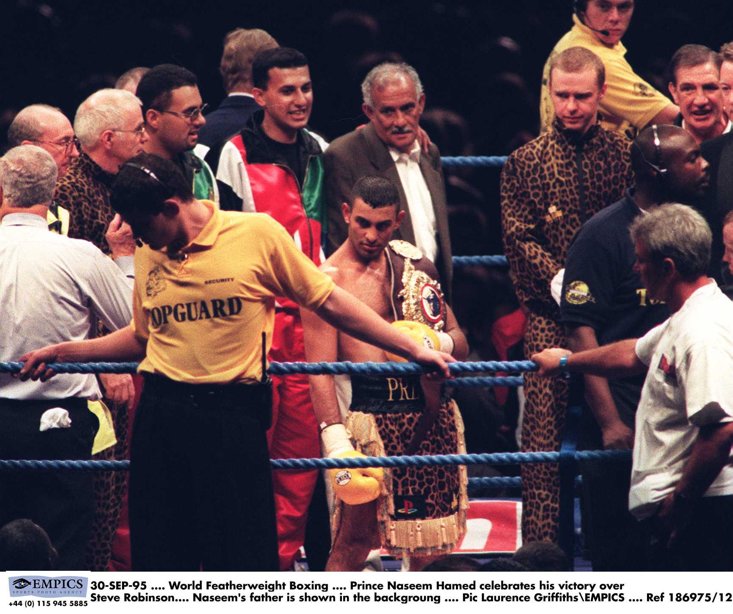 Staged at Madison Square Garden, the fight represented an international coming-out party for the ‘Prince’. No longer would curious Statesiders have to watch the preening champion flip acrobatically over the top rope on television, they could see him live and in-person. Before he even reached the squared circle, Hamed gave them a performance they’ll never forget. He danced from behind a screen to the still-fresh ‘Men In Black’ by Will Smith, before finally being revealed to the baying MSG crowd to Red Rat’s ‘Shelly Ann’. Slowly shimmying down a fashion runway, it would be ten minutes before the diminutive Sheffield fighter even reached the ring.

Incredibly, the action between the ropes would eclipse even this most ostentatious of entrances. In just four rounds, the pair would score three knockdowns each in an unbelievable fight. Naseem triumphed after putting Kelley down with a hard left, and became an overnight sensation in America. So enamoured was Hamed with the USA, he would have more fights there than in the UK for the remainder of his career.

That career would also reach its nadir across the pond. After six further defences of his championship, which included picking up Cesar Soto’s WBC title along the way, Hamed would finally taste defeat. The venue was the MGM Grand in Las Vegas, the opponent was Marco Antonio Barrera. The great Mexican had lost three of his previous fights, an all-time classic with Erik Morales and two bouts with Junior Jones. At the time he was a well-respected, world class fighter, but still a considerable underdog against the unbeaten Hamed. This would be the night Barrera made a huge step from top fighter to enduring ring legend. For the ‘Prince’, it would be the beginning of the end of his career. 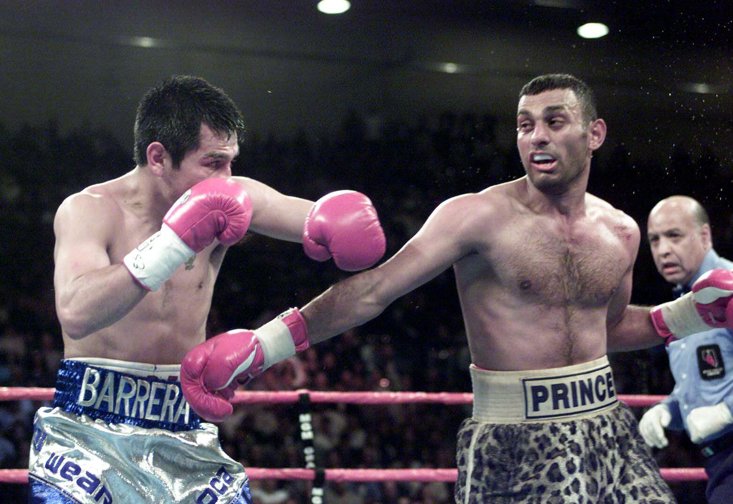 The Mexican beat Naseem from pillar-to-post, including at one point literally. Barrera had a point deducted after a wild swing from Hamed missed him and he caught the Sheffield man in a full-nelson, ramming his head into the turnbuckle. Barrera lost a point from this, but he had points to spare. He had made a mockery of Hamed’s unconventional style, boxing calmly and intelligently while the champion relied on wild swings in a vain attempt to connect with his foe. In short, it was a mugging. The scorecards were merely a formality. The dominant, cocksure featherweight king had been dethroned. He would never be the same again.

‘Prince’ Naseem Hamed only danced to the ring for one more fight. A tilt at the vacant IBO championship felt like an omen. The title belts had become less glossy, and so had the man vying for them. The opponent was the unknown Manuel Calvo, in a bout 13 months removed from the Barrera mauling. It was clear from the outset something was wrong. The snap was gone from Hamed’s shots, the perfect timing that had defined his defensive movement had evaporated. A disinterested fighter, Naseem laboured to a wide points decision on muscle memory alone. But it is a victory that resides a million miles away from any highlight reel you’re likely to find on the great champion. Barrera had rendered Hamed human, and that human no longer wanted to box.

‘Prince’ Naseem Hamed would evade the question of his retirement in the years that followed. There was no emotional in-ring ceremony to pay tribute to a departing legend, no lap of honour for a man who had entertained millions. His name would occasionally be raised to gauge interest in a possible comeback, but nothing ever materialised. In recent years Naseem has blamed a history of hand injuries for his premature retirement at the age of 28. There is truth in that, the fighter had a documented history of hand problems in his career. But seeing the Barrera defeat and the Calvo victory back-to-back, it is hard to shake the feeling that something was lost within Hamed. A fire, an arrogance, a primal need to assert dominance over his opponents. Maybe ‘Prince’ Naseem Hamed just needed to believe he was the best in the world, and when that was brutally taken from him, he had no desire to reclaim his throne. We will never truly know why his uniquely thrilling career came to an end, but we will always have the wealth of entertaining nights he gave us.

x
Suggested Searches:
Manchester United
Liverpool
Manchester City
Marcus Rashford
Premier League
More
boxing
Weekend's Boxing Provides A Fight Of The Year And Upset Of The...
An Upset of the Year contender, a Fight of the Year contender and a big night in Newcastle for British [ ... ]
boxing
On This Day In 1987: Tyson Brings The 15-Round Era To A Brutal...
On this day in 1987, boxing changed forever, as the last ever 15-round world heavyweight title fight [ ... ]
boxing
Brawl On The Tyne: Fury, Marshall And Chris Eubank Jr Descend...
Unbeaten Savannah Marshall makes the second defence of her WBO middleweight championship this Saturday [ ... ]
boxing
Mixed Week For The Eubanks: Five Boxing Stories You Might Have...
Boxing never sleeps, and with Fury-Wilder III in the rearview, attention has turned to exciting fights [ ... ]
boxing
Haye At 41: The World Title Wins That Defined ‘The Hayemaker’
Former two-weight world champion David Haye turns 41 today. ‘The Hayemaker’ is unfairly [ ... ]
boxing
''You Big, Stiff Idiot!'': The Wit And Wisdom Of Tyson Fury
Not content with being the most able heavyweight fighter on the planet, Tyson Fury is also a supreme [ ... ]
boxing
The King’s Gambit: Who Should Tyson Fury Fight Next?
‘The Gypsy King’ has the world at his feet after solidifying his claim to the throne with [ ... ]
boxing
Retirement Or Fight His Way Back: What Happens Now To Deontay...
Deontay Wilder’s stock amongst the boxing community managed to both rise and fall on a damaging [ ... ]
boxing
Tyson Fury Retains Heavyweight Titles In Incredible Trilogy...
The first fight was a resurrection. The second was a demolition. Tonight, Tyson Fury’s 11th-round [ ... ]
boxing
LIVE Tyson Fury v Deontay Wilder 3
Morning all! What are you doing up at this time? It's Tyson Fury v Deontay Wilder. Again! The WBC [ ... ]
boxing
Merseyside Derby: Experienced Smith Awaits For Hungry Fowler
Liam Smith takes on Anthony Fowler this Saturday in a battle for Liverpool supremacy. The former world [ ... ]
boxing
Whyte Lined Up For Fury/Wilder Winner, Five Boxing Stories You...
Ahead of a blockbuster weekend in boxing in the ring, it’s been a pretty busy week out of it. [ ... ]
boxing
The Man Who Beat The Man: Tyson Fury On The Lineal Championship
When Tyson Fury walks to the ring to face Deontay Wilder on Saturday night, he will have two belts in [ ... ]
boxing
Fury vs Wilder III Undercard Preview: Heavyweight Heaven In...
It’s heavyweight heaven this weekend in Las Vegas as not only will fight fans be treated to Tyson [ ... ]
boxing
“I Look At Deontay Wilder Like He’s Stupid” - The Tyson Fury...
“Boxing is not rocket science. It’s me going in there, punching a man's face in. That's [ ... ]
boxing
Happy Birthday, Micky Ward: Remembering The Gatti War That Launched...
The word warrior is thrown around so readily in boxing, it has lost some of its impact. While every [ ... ]
boxing
Liam Smith vs Anthony Fowler: Everything You Need To Know
There’s a monster match-up on Merseyside this weekend when Liam Smith and Anthony Fowler go head-to-head [ ... ]
boxing
On This Day In 1998: Floyd Mayweather Wins First Ever World...
“We believe in our heart of hearts that Floyd Mayweather is the successor in a line that starts [ ... ]
boxing
Undercard? When? How To Watch? Everything You Need To Know About...
Tyson Fury and Deontay Wilder go head-to head for a third time next weekend, with The Gypsy King’s [ ... ]
boxing
UK First Choice For AJ Vs Usyk Rematch, Five Boxing Stories...
There’s news on where Anthony Joshua’s rematch with Oleksandr Usyk could land, a modern [ ... ]
boxing
Rebuild And Reclaim: Why Anthony Joshua Needs A New Trainer
Anthony Joshua looked bereft of ideas as Oleksandr Usyk boxed, moved and pounded his way to a unanimous [ ... ]
boxing
Eubank Statement: Junior Can Be The Face Of Sky Sports Boxing
Chris Eubank Jr takes to the ring this weekend as the new crown jewel of Sky Sports’ boxing coverage. [ ... ]
boxing
Keep Moving Forward: How ‘AJ’ Can Learn From Lennox The Avenger
Anthony Joshua, the dethroned three-belt king of the heavyweight division, sat stoically in the post-fight [ ... ]
boxing
Oleksandr Usyk Puts In Boxing Clinic Against AJ To Take Heavyweight...
You’d be forgiven if you’re starting to grow a little weary of hearing ‘Sweet Caroline’ [ ... ]
boxing
Okolie Cruises To Victory In First World Title Defence On AJ...
The first defence of Lawrence Okolie’s WBO cruiserweight crown ended swiftly on the undercard [ ... ]
boxing
The Rebuild Begins For Callum Smith As He Steps Up To Light...
Callum Smith was the best super middleweight in the world. The Liverpool fighter was the latest outstanding [ ... ]
boxing
Anthony Joshua Weighs In 19lbs Heavier Than Usyk Ahead Of Heavyweight...
Anthony Joshua has weighed in at 240lbs ahead of his heavyweight showdown with Oleksandr Usyk this weekend, [ ... ]
boxing
Okolie Is The Latest In A Proud Line Of British Cruiserweight...
Anthony Joshua will not be the only British world champion stepping into the ring at the Tottenham Hotspur [ ... ]
boxing
Anthony Joshua vs Oleksandr Usyk Is Fight Of The Year, Says...
Ahead of Oleksandr Usyk’s heavyweight showdown with Anthony Joshua at the Tottenham Hotspur Stadium, [ ... ]
boxing
From Mike Tyson To Mr. Dream, How Punch-Out!! Defined Boxing...
Only 55 men truly know what it is like to face ‘Iron’ Mike Tyson. But a generation of gamers [ ... ]