Horse Racing
News
Weekends in horse racing do not get much better than the past couple of days
Matt Hulmes
15:49, 08 Feb 2021

Weekends do not get much better than the one we have just witnessed when it comes to sporting drama.

England were eclipsed by Scotland at Twickenham, a 43-year-old legend landed his seventh Super Bowl title and Man City got themselves one hand on the Premier League trophy by hammering Liverpool at Anfield. Then there was the Dublin Racing Festival. It once again delivered what it promised and much more besides.

Plenty on that shortly though, because for us racing fans all those were put in the shade by the return to the winner's circle of the 2018 Cheltenham Gold Cup winner Native River at Sandown. That victory came after a three-mile battle with his main rival where they went stride for stride until finally Might Bite caved in after the last fence. 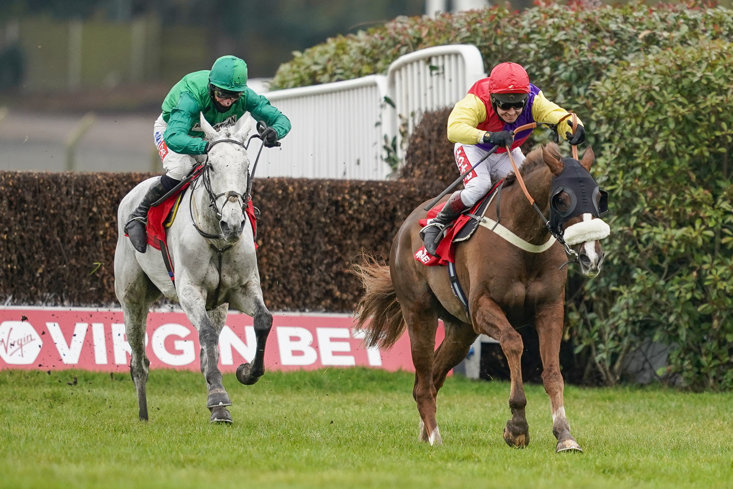 Fast forward almost three years and the now 11-year-old was in similar heart on Saturday. Trading punches on the front end with Yala Enki, it was Bristol De Mai and Santini left to try to get past. But get past they could not as Native River did what Native River does. There is no such thing as a change of pace, with relentless galloping on heavy ground showing guts, heart and determination, and that is what has endeared him to racing fans.

Could he go to Cheltenham and do it again? Could he? That’s the plan according to the Tizzards and he is 12/1 to become just the second horse to regain the Gold Cup crown.

Also on the card at Sandown, Sporting John put up an incredible performance to win the Grade 1 Scilly Isles Novices Chase. Jumping like a snooker table and in danger of tailing off early on, he was given a supreme ride by Richard Johnson, who took his time and managed to use the incredible engine the horse clearly has to make ground on the long run between four and three out.

He again wasn’t fluent at the last couple of fences but surged up the hill and is entered in three races at Cheltenham. The most likely would be the Marsh, for which he is 12/1, but he is also just 14/1 now for the Festival Nov Chase on the Wednesday.

Beyond Sandown there was the Dublin Racing festival, which was dominated by Willie Mullins once again. He trained an incredible nine winners from the fifteen races, hardly giving anybody else a look-in.

Saturday began with an impressive win for Gaillard Du Mesnil, in the first leg of a 13/1 four-fold for the Colonel of Closutton. This victory propelled him to 3/1 favourite for the Ballymore at Cheltenham after disposing of Ireland's best staying novice hurdlers in easy fashion.

The second leg was Chacun Pour Soi’s silky smooth success in the Dublin Chase. His cause was made easier by some uncharacteristic jumping errors from stablemate Min, but he never looked in danger under Paul Townend and hardened as favourite for the Queen Mother Champion Chase, standing as a solid odds-on favourite at 4/5 now against horses with a few questions to answer. 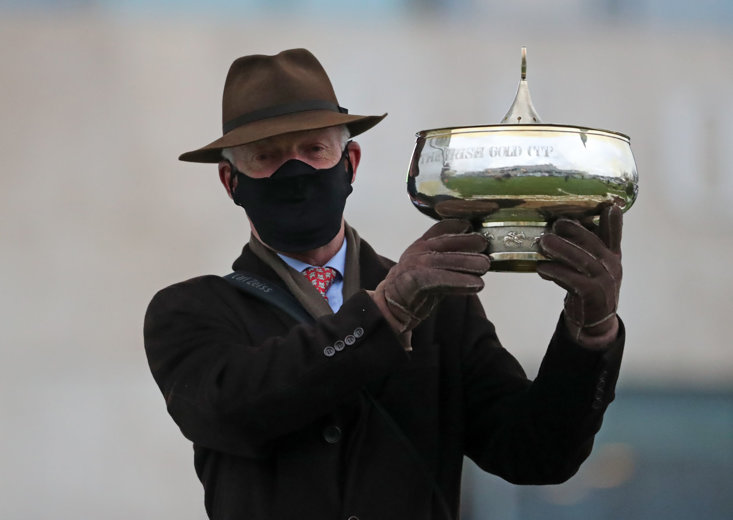 Just 35 minutes later over the same track and trip it was the same result for Messrs Mullins and Townend, with this time Energumene booking his place on the March ferry to Gloucestershire. He was surprisingly given an easy lead in a field that did contain plenty of pace angles, and that is something that will not be afforded him in the Arkle. However, he jumped and travelled beautifully, and again this result was never in doubt. He is now just 5/2 for the two-mile novice test behind the British banker Shishkin in what looks a mouth-watering match-up.

There was a brief respite from Mullins mania as the nation’s darling, Honeysuckle, duly delivered her second Irish Champion Hurdle by a huge 10 lengths to make it a perfect 10 from 10 under rules. She was the 10/11 favourite under Rachael Blackmore and was close up the whole way before being sent for home on the back of three out and asserted her authority all the way to the line.

Having won the Mares’ Hurdle at last year's Cheltenham Festival, connections look like giving up her title and sending her for a date with destiny for the Champion Hurdle itself. And on the back of this impressive victory, she is the one to beat, being installed as the 9/4 favourite.

If that wasn’t enough for day one, arguably the most eye-catching victory came in the last race. Kilcruit was a warm order at 11/10 to give Mullins his fourth winner of the day, but nobody envisaged the manner in which it would be achieved. This was a race of 10 previous bumper winners, all looking to have big futures in the game, and it expected to serve up an exciting contest. It was not meant to be the one-horse race it turned out to be.

The field had become strung out as they turned for home, but cantering in third was Kilcruit under a motionless Patrick Mullins, and he was sat still as the 6yo cantered up to and past the leaders two furlongs out. He sauntered onto an easy 12-length victory to propel himself to the head of the Champion Bumper market at 11/8f.

So that was Saturday, surely Sunday couldn’t match it for Mullins? “Hold my Beer,” he said.

Clearly the four-timer wasn’t enough on day one, he had to go one better on the second day, but that wasn’t before Gordon Elliott got on the scoresheet in the Juvenile Hurdle.

Quixilios was backed into odds-on favouritism in the morning and never looked in trouble to deliver, winning by a cosy five lengths in a race that did somewhat fall apart. He was cut to 9/2 for the Triumph Hurdle behind stable companion Zanahiyr, who is the 5/2 market leader for the juvenile crown.

It was then time for the Mullins Show part 2.

It got underway with the shortest-priced favourite of the weekend, Appreciate It, delivering at 1/3f in the two-mile novice hurdle. He wasn’t as flashy as some of Saturday's winners and Ballyadam managed to close the gap from his Christmas beating by 13 lengths.

Arguably he ran with one eye on the Cheltenham Festival opener in five weeks’ time, for which he is now 6/4f, as he was authoritative without being impressive. But win he did, and he will now head to Cheltenham as the day one Irish Banker and bid to give Mullins a seventh Supreme success.

Mullins landed the handicap hurdle half an hour later with 40/1 shot Maze Runner before Monkfish made most for victory in the Flogas Novices Chase. Unlike Appreciate It, this victory did have swagger and style as he sauntered 11 lengths clear of Latest Exhibition, a rival he had beaten by a neck at last year's Cheltenham Festival and by three lengths over Christmas. Here he was stamping his class with even more authority and is another odds-on favourite for the Mullins shipment at 10/11f for the Festival Novices Chase. 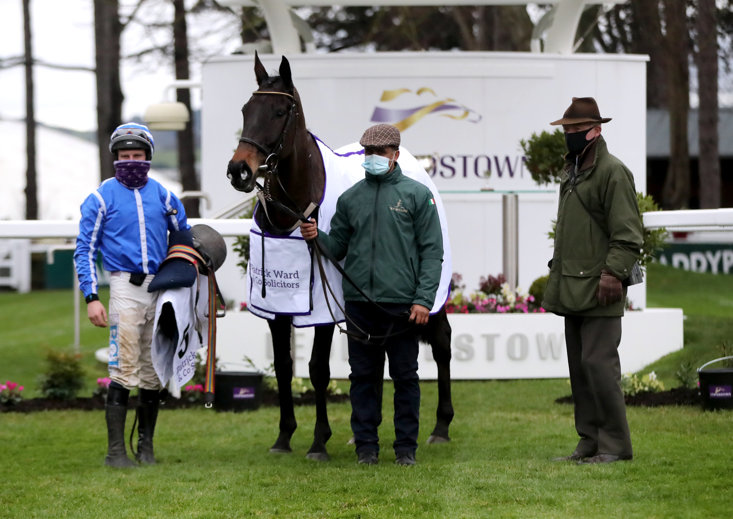 Mullins completed his haul of six grade ones from the eight over the weekend with Kemboy, another one who made all, in the Irish Gold Cup. Danny Mullins dictated once again, just as he had when winning the 2018 Savills Chase and is now a 10/1 shot for the Gold Cup, a market headed by his stable companion and hat-trick seeking Al Boum Photo at 3/1.

Kemboy will find it much more difficult to dominate at Cheltenham and perhaps wouldn’t be at home on an undulating track, but the big staying chases at Aintree and Punchestown will certainly see him as a major contender.

We are just five weeks and counting now to the ‘Greatest show on turf’ despite there being no famous roar this year, it will still be a meeting to savour and, after this weekend, Willie Mullins has got a phenomenal 12 ante-post favourites in the festival's non-handicaps.

Will the Mullins Monopoly bash the bookies at Prestbury Park?