The Los Angeles Lakers need to win the final two games of their NBA Playoff First Round series against the Phoenix Suns, starting on Thursday night at the Staples Center, or their reign as NBA champions will be over.

With Anthony Davis facing a race against time to return from the groin injury he suffered in Game 4, the Lakers will be hoping that one of their key weapons can play a major part in a somewhat unlikely comeback.

Their story is just one of the many unfolding narratives the current play-offs have thrown up, with some ding-dong series still going on while a number of teams are already waiting to get started in the conference semi-finals.

So what is the current state of play in the various series, and what can we expect from Thursday night’s games? Here’s the full run-down…

The number-one seed Sixers were always in command of the series against a Wizards side which had come through the new Play-In Tournament to qualify. But with Joel Embiid potentially missing the conference semi-finals there will have to be a raising of the level from the rest of the team against a far better equipped Atlanta Hawks side. Tobias Harris will be their go-to man, but the prospect of Embiid being either missing or half-fit will not be pleasant for Philadelphia. The Hawks have the magnificent Trae Young in their ranks, but it will take a full-on team effort for them to take the Sixers deep. 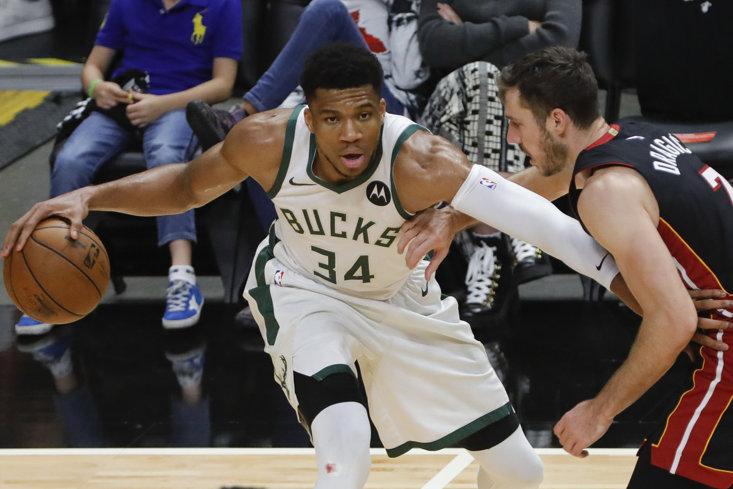 GIANNIS ANTETOKOUNMPO WILL HAVE A BIG SAY AGAINST THE NETS

The all-star Nets meet the Bucks after both teams made light work of their lower-seeded opponents in the first round. Giannis Antetokounmpo unsurprisingly played a key role as Milwaukee swept the Heat, while James Harden, Kyrie Irving, Kevin Durrant et al make for a formidable Brooklyn side who are 4/9 favourites to progress with Betfred.

The Grizzlies really put the cat amongst the pigeons in Game 1 with a stunning win in Salt Lake City, but the top-seed Jazz took it out on them over the next four games to eventually win the series with ease. Donovan Mitchell was the star man throughout for Utah, and their 47-point onslaught in the first quarter of Game 5 was just the latest example of their clear superiority. They are now a 6/4 bet for the Western Conference title and considered 4/1 second favourites for the NBA Championship. 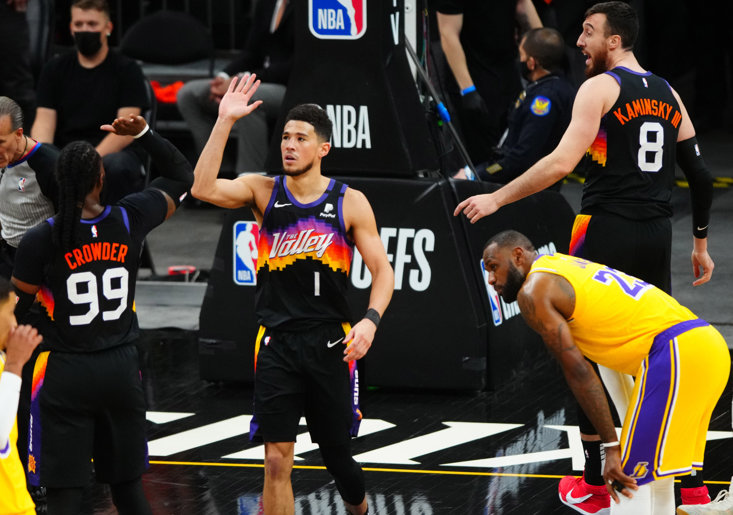 DEVIN BOOKER HAS STARRED FOR THE SUNS, WHO ARE ONE WIN AWAY FROM THE SEMIS

The question mark hanging over Anthony Davis is the big storyline going into a Game 6 that the Lakers simply have to win. LeBron James couldn't do all the lifting himself in a heavy loss in Game 5 without Davis, and the Suns will fancy their chances whether Davis is missing or simply hindered by the groin problem. Devin Booker has starred for the Suns so far, with more than 26 points per game on average, and Phoenix will be hoping he can do enough on Thursday night to ensure there is no winner-takes-all game back at the Suns Arena this weekend.

This series has been nip and tuck from the off, with the Nuggets' victory in a second period of overtime in Game 5 just the latest example of how well matched the two sides are. The Blazers are 100/1 outsiders to collect the NBA title but have given the higher-seeded Nuggets a real run for their money so far despite the five-win difference in their regular-season records.

Luka Doncic has proven to be an absolute beast in the First Round so far, tallying 35 points, eight rebounds and 9.4 assists per game across the first five. His form has been the driving force behind the Mavericks going into a home game six with the chance to wrap up the series and book a meeting with the number-one seed Utah Jazz. Kawhi Leonard, Paul George et al will have to lay it all on the line if the Clippers are to rescue the series and head to Salt Lake City for another round.

x
Suggested Searches:
Manchester United
Liverpool
Manchester City
Marcus Rashford
Premier League
More
us-sports
Kevin Durant Display Against Bucks Cements His Place As An All-Time...
“GREATNESS,” wrote LeBron James on Twitter in the aftermath of the Brooklyn Nets’ [ ... ]
us-sports
MVP Nikola Jokic Ejected As Phoenix Suns Reach Western Conference...
They have been waiting for over a decade, but the Phoenix Suns have finally reached the Western Conference [ ... ]
us-sports
Once Second-Best To Taco Bell, Nikola Jokic Is Now The Very...
Nikola Jokic’s rise to the summit of the NBA has been like no other. The Serbian has now joined [ ... ]
us-sports
Has Father Time Finally Caught Up With LeBron James?
All great athletes have an expiry date. Muhammad Ali broke the hearts of millions as he was retired [ ... ]
us-sports
On This Day, Michael Jordan's Chicago Bulls Humiliate Utah Jazz...
The greatest defensive game of all time? Quite possibly. On this day in 1998 Chicago Bulls put on an [ ... ]
us-sports
Baseball Passes Two Million Runs, But Nobody Seems To Know When!
A baseball milestone was reached on Friday night. The same landmark was hit on Saturday. And it won’t [ ... ]
us-sports
Thursday's NBA Playoffs: Your Full Guide To The First Round...
The NBA playoffs are now very much in full swing as the Los Angeles Lakers fight it out with 15 other [ ... ]
us-sports
Aaron Rodgers Destined To Leave Packers As Relationship Reaches...
He’s a three-time MVP adored by his fan base, the face of the franchise in the modern era and [ ... ]
us-sports
NBA Playoffs: Your Game-By-Game Guide To Saturday's First Round...
Following a thrilling inaugural play-in tournament, NBA’s playoffs get into full swing on Saturday [ ... ]
us-sports
Turnbull No-Hitter Puts MLB Well On Course To Smash All-Time...
It would appear that 2021 is Major League Baseball’s ‘Year of the No-Hitter’. Detroit [ ... ]
us-sports
NBA Champion Lakers Host Warriors In Thrilling New One-Game...
The Los Angeles Lakers host the Golden State Warriors in a one-game head-to-head to qualify for the [ ... ]
us-sports
Brady's Buccaneers To Host The Cowboys in Week 1 Of The New...
Defending Super Bowl champions the Tampa Bay Buccaneers will begin their 2021 NFL season by hosting [ ... ]
us-sports
Utah Jazz Face Big Test Against LA Lakers In Surprise Bid For...
The Utah Jazz are the ultimate mid-level NBA team. They had great success in the nineties due to the [ ... ]
us-sports
Better Than Jordan, Tiger And Messi? Nobody Has Dominated A...
It was meant to be Tom Brady versus Patrick Mahomes. In the end, we just had further proof that the [ ... ]
us-sports
7 Up For Brady As His Super Bowl Masterclass Humbles Mahomes...
Tom Brady has done it again. The greatest quarterback in the history of the game won his seventh Super [ ... ]
us-sports
Mahomes Is The Hot New Thing, But Brady Has Made A Career Of...
Super Bowl LV is keenly poised, with the hype machine overloading on the narrative of Tom Brady vs Patrick [ ... ]
us-sports
Michael Jackson, Katy Perry And The Most Bizarre Super Bowl...
In the US last year, over 102 million people tuned in to watch the Kansas City Chiefs and San Francisco [ ... ]
us-sports
Five American Football Films To Get You In The Mood For Super...
A whopping 102 million people tuned in to see the Kansas City Chiefs end a 50-year wait for Super Bowl [ ... ]
us-sports
Train Like A Quarterback With Tom Brady’s Upper And Lower Body...
Tom Brady belongs to the pantheon of elite sportsmen and women who in their own fields can claim to [ ... ]
us-sports
From Sports Fan To Sports Superstar, Tony Parker Recounts Rise...
“I never could have imagined such a destiny. Not even in my wildest dreams, in my childhood bedroom [ ... ]
us-sports
Pitch Invasions, Fires And Broken Records: When Disco Caused...
On July 12, 1979, a baseball game between the Chicago White Sox and Detroit Tigers ended with riot police [ ... ]
us-sports
Netflix’s ‘The Last Dance’ Succeeds In Bringing Jordan To Life...
The Last Dance came to a close this week as Netflix released the final two episodes of the incredibly [ ... ]
us-sports
Netflix’s ‘The Last Dance’ Shows How Tragedy Led To Jordan Quitting...
Episode seven of Netflix’s latest docu-series, ‘The Last Dance,’ which gives viewers [ ... ]
us-sports
“It Must Be The Shoes” - The Nike Powerhouse That Michael Jordan...
In a collaboration spanning over 30 years, accumulating billions of dollars in revenue and is said to [ ... ]
us-sports
Why Bill Simmons' $7M A Year Sports Podcast Deserves Your Full...
For the majority, 2020 so far isn’t turning out to be the most vintage year, especially in the [ ... ]
us-sports
Netflix’s The Last Dance Sheds Light On Kobe’s Rivalry With...
Episode five of ‘The Last Dance’ opens to the Nas classic ‘If I Ruled The World,’ [ ... ]
us-sports
Netflix’s Jordan Doc 'The Last Dance' Sheds Light On The Real...
“I could have been a bomb, I could have been in jail, I could have been dead,” says Dennis [ ... ]
us-sports
Five Things We Learned From Netflix's New Michael Jordan Doc...
The first two episodes of Netflix’s new Michael Jordan docu-series, ‘The Last Dance,’ [ ... ]
us-sports
''I'm Going To Disney World'' - Why Super Bowl MVPs Celebrate...
52 million. That’s the average number of visitors to Walt Disney World in Orlando, Florida every [ ... ]
us-sports
With His 15 Minutes Of Super Bowl Madness Patrick Mahomes Breaks...
On February 6 2013, days after Joe Flacco and the Baltimore Ravens produced a narrow victory over the [ ... ]