Snooker
News
The Australian took advantage of a shock lifeline offered by the Juddernaut to sink the final pink and claim a third UK title
Hector Nunns
23:35, 23 Nov 2021

There may have been no physical crowd to witness the drama in the arena at Milton Keynes, but no one who saw or experienced Neil Robertson’s dramatic 10-9 win over Judd Trump in last year’s UK Championship final will ever forget it – least of all the Australian himself.

After thrills and spills to rival the great Dennis Taylor v Steve Davis Crucible final back in 1985 decided on the last black, a dazed Robertson took advantage of a shock lifeline offered by the Juddernaut to sink the final pink to seal victory and claim a third UK title, while still looking at the scoreboard and wondering if he had done enough.

After a barely credible decider that featured far more unlikely plot twists than you would find in your average thriller novel, Trump was left with a pink for the title – straightforward if slightly harder than it might have been after falling slightly out of position on the final blue.

Robertson, having given everything in both the match and the tournament, was sitting in his chair wondering how he would manage to come over a gracious loser after such a devastating defeat. And then it all changed as Trump missed, and his grateful rival stepped to the table to end the contest.

The Melbourne-born ‘Thunder From Down Under’ told World Snooker Tour: “The first session of the final was very good, and the second session started okay but then became tougher. Several frames were tightly contested. 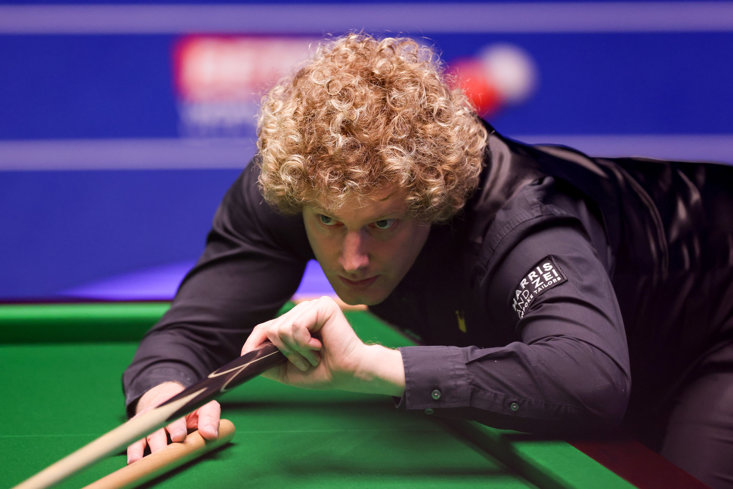 “A key moment for me was when Judd was 9-8 up and went into the pack off the blue. I didn’t think he had to and was hoping he would, thinking it was the best chance of him falling out of position.

“He ended up missing a red bridging over another ball. I potted a tough opening red and an unbelievable brown into the middle. If I miss it, I lose the final. I could have rolled up behind a colour. But I knew if I potted it I’d have a great chance of clearing and forcing a decider.

“Tony Drago called the next day and said that he had always thought a brown Stephen Hendry potted against Jimmy White in a Crucible final was the best pressure ball he had ever seen.

“But he thought this one was now the best. I suppose if I miss, I lose the final. Maybe Hendry misses, he doesn’t lose the World Championship. He goes very far behind, but it’s not lost.”

The Hendry shot on the brown referred to was an incredibly brave effort down the cushion when trailing Jimmy White 14-9 in the world final, allowing him better position on the yellow to clear up rather than playing a less positive shot. It helped him close to 14-10, and he went to win 10 frames in a row for an 18-14 victory and a second world title.

Robertson continued: “The decider was just very topsy-turvy. On one shot I am on 20-something and I take about four or five minutes deciding if I can pot a pink with the spider.

“I apologised to Judd straight away after eventually playing safe, when your brain can’t make a decision it is hard to just get down and play a shot, you can’t make your mind up!

“He’s butchered a safety shot, then left the yellow over the middle but snookered me on it behind the black. It was an unbelievable rollercoaster.

“Then Judd spent ages weighing up deciding whether to go for the green knowing if he misses, he loses and plays safe. Then he has the chance at the end, knocks in an amazing green, didn’t land quite right on the blue.

“I am in my chair thinking how devastated I would be to lose. I had played so well in the tournament and broken the record for century breaks made. I had had a really tough draw with the players I had beaten like Mark Selby in the semi-finals, the way I played there.

“I am getting the runners-up speech ready and telling myself to be as gracious as possible and show Judd the respect anyone deserves for winning a match like that.

“And then he’s missed the pink. Mark Williams said to me I didn’t get enough credit for the pink I potted because that was an awful shot to be left.

“It was thin and the white was going to come twice across the table and could have cannoned off the black or gone in off. It was one of the sweetest shots I have ever hit, straight in the middle. Then a quick look at the scoreboard to make absolutely sure I didn’t need the black. Then it’s ‘I won…thank God!’.

“And then I really felt for Judd because that’s an awful position to be in. I’ve been there myself as a losing finalist, and top players experience massive highs and huge lows. But he has this part about him to bounce back, and he bounced back to win the Grand Prix. He is a true champion and I really enjoy our battles.”