“But I worked my ass off to get here,” he concludes defiantly.

Even those unaccustomed to the world of NBA are likely very aware of who Rodman is. Whether that’s as basketball’s supposed wild child of the 90s, as Carmen Electra’s wacky-haired ex or as a chum of North Korea’s Supreme Leader, Kim Jong-Un - you don’t have to be a hoops aficionado to understand ‘The Worm’ is TV gold. But was he really as wild as he people say?

"You hear a lot of negative things about Dennis Rodman. But you don’t actually know Dennis Rodman,” the former power forward states.

"They just see what they see on the court and see what they read in the papers. They think he’s a bad person,” the enigmatic five-time NBA champion explains in third person.

“I created this monster,” he adds when asked if he gets offended when people describe him as a bombastic oddity.

The third and fourth episodes of The Last Dance are laden with Rodman anecdotes that certainly help expand his mythos. But even though it’s clear he’s the proverbial ticking time bomb in the Bulls’ dressing room at times, it’s also very clear that Rodman is far from a bad guy and there’s certainly something incredibly likeable about him on and off the court. 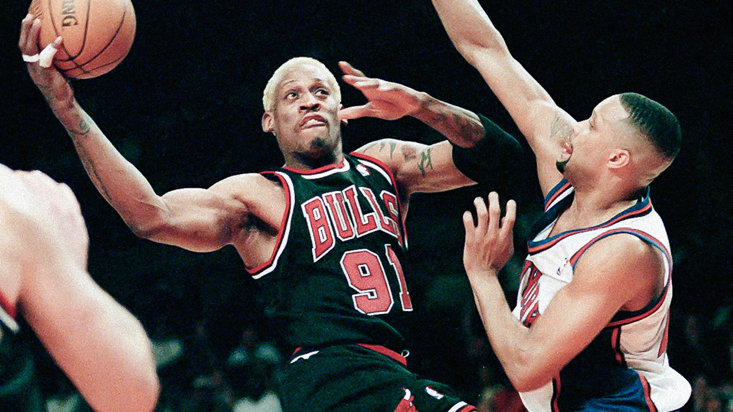 A lynchpin for the tough-as-nails Detroit Pistons in the mid to late 80s, the franchise that were bitter rivals with Jordan’s Bulls, Rodman was a master in on-ball defence and an intimidating presence on the court long before the haircuts and the wild piercings.

Described by one teammate as “the f*ck-up person” because when he’s out there he “just f*cks stuff up,” Rodman was the man willing to go the extra mile and do whatever had to be done to secure a win.

In February 1993, Rodman’s career changed for good when he was discovered by police asleep in his car with a loaded gun, something he would call an epiphany in his 1997 autobiography, As Bad As I Wanna Be:

"I decided that instead [of killing myself] I was gonna kill the impostor that was leading Dennis Rodman to a place he didn't want to go ... So I just said, 'I'm going to live my life the way I want to live it and be happy doing it.

And so, with three years and $11.8 million remaining on his contract, Rodman demanded a trade from the Pistons and on October 1 joined the San Antonio Spurs.

With a new blonde Demolition Man-style trim a la Wesley Snipes and new flame Madonna by his side, the era of the Dennis Rodman we all know was about to take off.

Bulls’ coach Phil Jackson, despite the concerns of General Manager Jerry Krause, drafted Rodman from Spurs ahead of the 1995/96 season where he would feature as part of ‘the Three Amigos’ alongside the iconic duo of Jordan and Scottie Pippen.

During Pippen’s absence following a controversially timed foot-surgery, Rodman excelled as Michael Jordan’s right hand man and as he says himself, “Nobody can say anything bad about me as a teammate.”

It was the Bulls’ trust in Rodman that would see him soar, especially Jordan and Jackson. They knew he was a maverick but knew just as well he had to be left off his leash every once in a while to get the best of him.

When Pippen finally returned, Rodman was more third wheel than third amigo - fed up, he decided he needed a vacation to Las Vegas. Exasperated but aware they had little choice, Jordan and Jackson gave him a strict 48-hour time limit, even if Jordan was more than a bit dubious that he’d ever return home from the Strip.

Alas, he didn’t come home, leading to maybe the best Rodman story in the documentary yet, in which Jordan is forced to turn up at the tearaway’s hotel room while Rodman’s girlfriend at the time, Carmen Electra, is forced into hiding from the seething icon.

Though he certainly wasn’t a saint - he did nut a referee and kick a cameraman in the nuts whilst at the Bulls after all - The Last Dance does an excellent job of bringing to light the real Dennis Rodman.

As Jordan says, “Dennis was always there [mentally]. He was always on point.”

With six more episodes of The Last Dance still to come to Netflix (Two episodes drop every Monday), we can’t wait to see what Rodman does next.

x
Suggested Searches:
Tyson Fury
Manchester United
Marcus Rashford
Lewis Hamilton
F1
Air Jordan
More
us-sports
Utah Jazz Face Big Test Against LA Lakers In Surprise Bid For...
The Utah Jazz are the ultimate mid-level NBA team. They had great success in the nineties due to the [ ... ]
us-sports
Better Than Jordan, Tiger And Messi? Nobody Has Dominated A...
It was meant to be Tom Brady versus Patrick Mahomes. In the end, we just had further proof that the [ ... ]
us-sports
7 Up For Brady As His Super Bowl Masterclass Humbles Mahomes...
Tom Brady has done it again. The greatest quarterback in the history of the game won his seventh Super [ ... ]
us-sports
Mahomes Is The Hot New Thing, But Brady Has Made A Career Of...
Super Bowl LV is keenly poised, with the hype machine overloading on the narrative of Tom Brady vs Patrick [ ... ]
us-sports
Michael Jackson, Katy Perry And The Most Bizarre Super Bowl...
In the US last year, over 102 million people tuned in to watch the Kansas City Chiefs and San Francisco [ ... ]
us-sports
Five American Football Films To Get You In The Mood For Super...
A whopping 102 million people tuned in to see the Kansas City Chiefs end a 50-year wait for Super Bowl [ ... ]
us-sports
Train Like A Quarterback With Tom Brady’s Upper And Lower Body...
Tom Brady belongs to the pantheon of elite sportsmen and women who in their own fields can claim to [ ... ]
us-sports
From Sports Fan To Sports Superstar, Tony Parker Recounts Rise...
“I never could have imagined such a destiny. Not even in my wildest dreams, in my childhood bedroom [ ... ]
us-sports
Pitch Invasions, Fires And Broken Records: When Disco Caused...
On July 12, 1979, a baseball game between the Chicago White Sox and Detroit Tigers ended with riot police [ ... ]
us-sports
Netflix’s ‘The Last Dance’ Succeeds In Bringing Jordan To Life...
The Last Dance came to a close this week as Netflix released the final two episodes of the incredibly [ ... ]
us-sports
Netflix’s ‘The Last Dance’ Shows How Tragedy Led To Jordan Quitting...
Episode seven of Netflix’s latest docu-series, ‘The Last Dance,’ which gives viewers [ ... ]
us-sports
“It Must Be The Shoes” - The Nike Powerhouse That Michael Jordan...
In a collaboration spanning over 30 years, accumulating billions of dollars in revenue and is said to [ ... ]
us-sports
Why Bill Simmons' $7M A Year Sports Podcast Deserves Your Full...
For the majority, 2020 so far isn’t turning out to be the most vintage year, especially in the [ ... ]
us-sports
Netflix’s The Last Dance Sheds Light On Kobe’s Rivalry With...
Episode five of ‘The Last Dance’ opens to the Nas classic ‘If I Ruled The World,’ [ ... ]
us-sports
Five Things We Learned From Netflix's New Michael Jordan Doc...
The first two episodes of Netflix’s new Michael Jordan docu-series, ‘The Last Dance,’ [ ... ]
us-sports
''I'm Going To Disney World'' - Why Super Bowl MVPs Celebrate...
52 million. That’s the average number of visitors to Walt Disney World in Orlando, Florida every [ ... ]
us-sports
With His 15 Minutes Of Super Bowl Madness Patrick Mahomes Breaks...
On February 6 2013, days after Joe Flacco and the Baltimore Ravens produced a narrow victory over the [ ... ]
us-sports
Forget Chewing Tobacco, Now Major League Baseball Lifts Ban...
Major League Baseball has jointly announced in agreement with the Major League Players Association "significant [ ... ]
us-sports
Colin Kaepernick Set For NFL Return After Being 'Blackballed'...
Even those with the most basic knowledge of American Football have come to know and recognise the name [ ... ]
us-sports
Stop! Stop! He's Already Dead - The American Coach Disciplined...
Ever been penalised for being too good at something? It’s a situation poor American football coach [ ... ]
us-sports
NBA Legend Shaq O'Neal Pays For Victim Of High School Shooting...
Shaquille O’Neal is a literal giant of a man. Standing all of seven-foot-one with a size 22 shoe, [ ... ]
us-sports
Sneakergate: Nike Stock Shares Plummet After Epic Zion Williamson...
Nike and basketball are inextricably linked. One goes in hand (or foot) with the other, although the [ ... ]
us-sports
Usain Bolt Ties NFL Record With Sensational Sprint Effort Ahead...
Usain Bolt's foray into the world of football (or 'soccer' for our American friends) was [ ... ]
us-sports
Super Bowl LIII Preview: Los Angeles Rams Vs New England Patriots
Super Bowl LIII, the 53rd instalment of one of the world’s most highly anticipated and watched [ ... ]
us-sports
Crunch Time As NFL Reaches Final Round Of Regular Season
The final week of the NFL regular season is notoriously difficult to forecast. Teams that have locked [ ... ]
us-sports
Rejuvenated Cleveland Browns Headline The NFL Week 16 Betting...
Back in 2013, Andy Reid’s Kansas City Chiefs started the season on fire, running up a 9-0 record [ ... ]
us-sports
Aaron Rodgers To Help Green Bay Packers Beat Atlanta Falcons...
Fired Green Bay head coach Mike McCarthy placed a full-page ad in all the Wisconsin papers yesterday [ ... ]
us-sports
GREEN BAY PACKERS HAVE NOT GIVEN UP ON WILDCARD PLACE - NFL...
With five weeks to go until playoff spots are finalised, every game takes on extra significance, unless [ ... ]
us-sports
Jags And Steelers Feature In Exciting NFL Week 12 Betting Picks
Last weekend’s slate of games featured potential Super Bowl previews, crazy shoot-outs, fierce [ ... ]
us-sports
LA Rams To Get The Better Of Kansas City Chiefs As NFL In Potential...
In what could well be a preview of the Super Bowl, Andy Reid’s 9-1 Kansas City travel to the West [ ... ]