A topsy-turvy Johan Cruyff ArenA spectacle saw the Netherlands throw away a two-goal lead, only for Denzel Dumfries to pop up and clinch a 3-2 victory late on against a brave Ukraine outfit.

In an early contender for game of the tournament, five second-half goals saw Andriy Yarmolenko and Roman Yaremchuk cancel out earlier strikes from Georginio Wijnaldum and Wout Weghorst, before Dumfries spared the Oranje blushes with his first international goal.

For those who didn’t watch the Johan Cruyff ArenA action, you’d be forgiven for assuming that a goalless first half didn’t offer much in the way of entertainment. You’d be mistaken, and that is one serious understatement.

From the very first whistle, caution was well and truly thrown to the wind, with both sides pressing forward for an early advantage. The opening 10 minutes alone saw Memphis Depay have an effort saved at the near post, Yarmolenko and Dumfries come close, while Wijnaldum was shooting for fun. In fact, the Netherlands became the first team since 1980 to have seven shots in the opening 10 minutes of a European Championship game, beating the previous record of five.

They showed no signs of slowing down from there, with Weghorst rounding Georgiy Bushchan only for the Dynamo Kiev stopper to recover well to thwart his effort.

The opening period ended as it began, with the Oranje doing everything but score. Wijnaldum forced a spectacular save from Bushchan, before Dumfries pulled a free header wide of the back post. 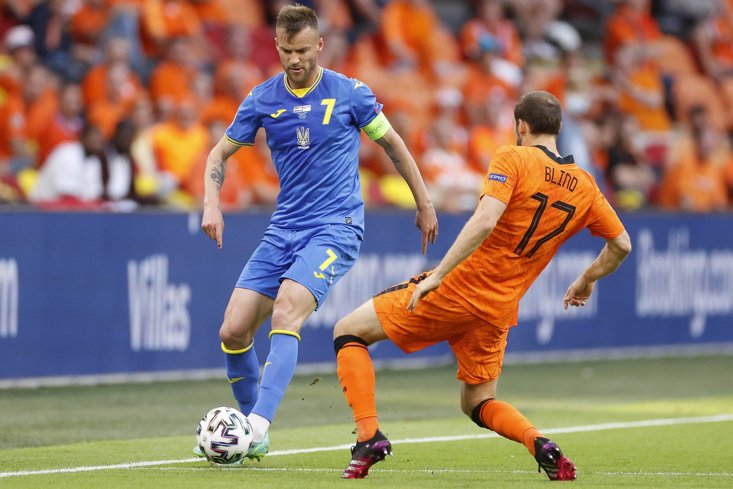 Frank de Boer’s half-time instructions would have been for his men to go out and pick up where they left off, and they did just that and more when Wijnaldum finally opened the scoring by keeping his composure to fire home his effort after the busy Ukraine keeper had got a hand to a low cross.

Wijnaldum, who has joined French giants PSG from Liverpool, has now scored 23 goals in 76 appearances for his national side. Consider that he scored just 22 in 237 appearances for the Merseyside outfit, and Jurgen Klopp may just live to regret his decision of not playing him further forward during his tenure.

Wijnaldum was central to most of the Netherlands’ attacking play, as is often the case with the former Newcastle man having top-scored for the Dutch in qualifying with eight goals to his name. Wolfsburg forward Weghorst doubled the lead not long after, with the Netherlands seemingly cruising to an opening-day win.

Yarmolenko’s early contender for goal of the tournament with 15 minutes left on the clock meant for a nervy ending for the home side, with his left-footed strike from distance curling into the far corner. The scores were level a matter of minutes later, when Yaremchuk rose highest to fire his header past Maarten Stekelenburg – the oldest player in the tournament.

For all of their attacking brilliance, the familiar frailties that have resulted in the Netherlands losing their previous four European Championship outings reared their ugly head. However, the wait for a first win in this competition since a 2-0 victory over Romania in 2008 was put to bed when Dumfries made amends for his earlier missed opportunities by meeting a deep cross to send the army of onlooking orange wild.

If De Boer’s men want to stand a chance of winning this competition, they’ll have to tighten up defensively. But the resilience shown in recovering from letting a two-goal lead slip to record a crucial win will provide confidence.

We’re only on day three, and we’ve surely just witnessed a contender for the most entertaining game in the tournament.

More of the same tomorrow please.