The Netherlands put on another fine display as they cruised to a 3-0 victory over North Macedonia to underline their position as Euro 2020's chief entertainers.

A Georginio Wijnaldum brace and a smart finish from Memphis Depay were enough for Frank de Boer’s side to maintain their fine form heading into the Round of 16. The Netherlands have been a joy to watch when they have attacked in their three games so far. The way that the midfield and full-backs have aggressively attacked to offer support to Memphis and his supporting forwards Wout Weghorst and Donyell Malen has been a revelation. In particular, Frenkie De Jong, Wijnaldum and Denzel Dumfries have been key in setting the Dutch on their way in fast breaks and reaping their rewards, with Wijnaldum having three goals to his name, while Depay and Dumfries have also scored two each.

They have been exciting with their one-two passing and the awareness they have of the teammates around them. The Netherlands players have linked up well in their three group matches but one thing is for certain; questions will be asked of their defence in the knockout stages. They threw away a two-goal lead in their first game against Ukraine and they had a few scares against North Macedonia too. It will be interesting to see how they square up against the attacking threat carried by the likes of Italy and France. One thing is for certain, when it comes to the Dutch, there is a certainty for goals at either end of the pitch and they may yet become more resilient as the tournament progresses. 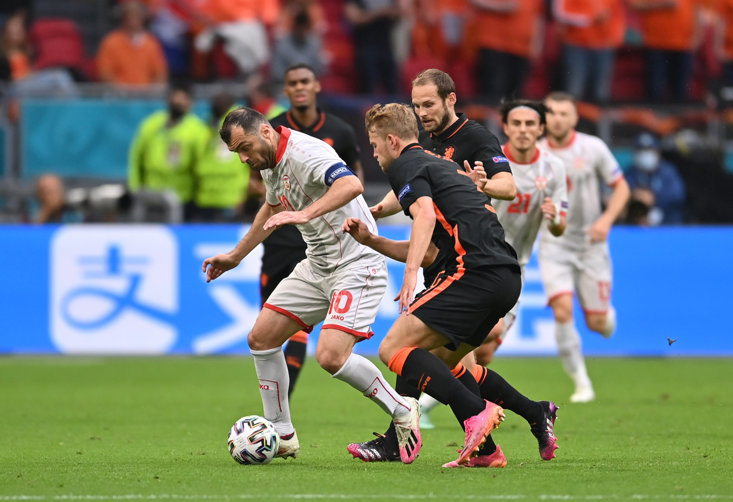 DEFENSIVELY THE NETHERLANDS HAVEN'T BEEN AS CONVINCING AS THEIR ATTACK

Wijnaldum’s tenacity on and off the ball is key to how De Boer wants his side to play. In the games against Ukraine and North Macedonia, he played in a more advanced role and it suited him because it allowed him to dictate play, whereas he was positioned to sit deeper against Austria and he was unable to have the same impact. He has excelled in the two formations the Netherlands have tinkered with so far, a traditional 4-3-3 and a 3-5-2.

The game started with the Dutch imposing themselves early as Ryan Gravenberch had an attempt on goal in the opening stages but his effort sailed over the crossbar. North Macedonia had the ball in the back of the net just before the 10-minute mark but it was flagged for a very marginal offside, and they then hit the woodwork through Aleksandar Trajkovski, who rattled the right post with a powerful drive from just outside the penalty area.

The Netherlands opened the scoring in a fast break when Memphis slotted home from inside the penalty area. Dumfries was once again showing his attacking intent as he almost grabbed his third goal of the tournament.

The Oranje extended their lead early in the second half when first goalscorer Memphis pulled the ball across from the left to set up Wijnaldum for a tap in. Wijnaldum then scored his second of the game when he was alert enough to pick up on a loose save and seal the victory for the Oranje.

This is a Netherlands side that will thrill everyone going forward but will also leave their fans having kittens when they defend. And that can only mean greater entertainment for the neutrals.