Steven Gerrard has been announced as the new Aston Villa manager which brings an end to his three years as Rangers manager. The former England captain joins the club having won The Gers their 55th title in May and ended Celtic’s monopoly on the Scottish Premiership, but now he has taken his first job in the Premier League.

“Aston Villa is a club with a rich history and tradition in English football and I am immensely proud to become its new Head Coach,” he said on Villa’s official website.

“In my conversations with Nassef, Wes and the rest of the Board, it was apparent how ambitious their plans are for the club and I am looking forward to helping them achieve their aims.

“I would like to express my sincere gratitude to everybody associated with Glasgow Rangers for giving me the opportunity to manage such an iconic football club. Helping them secure a record-breaking 55th league title will always hold a special place in my heart. I would like to wish the players, staff and supporters the very best for the future.”

Moving away from Rangers, where his job was seemingly secure after the title win does seem like a risk for a manager with no experience in the English game. He was making progress season upon season north of the border and helped develop the team into title winners, while his name also meant he was able to attract quality players.

Ianis Hadji, Scott Wright and Ryan Kent all joined during his tenure and as a result the club were also able to make progress in Europe, something Aston Villa are striving to get into. With Gerrard at the helm, a manager with a win percentage of 64.77%, Villa are keen to move away from relegation zone and start competing at the top end of the table.

However, from a personal point of view, it does feel as though Gerrard has taken a huge risk with this move, but perhaps one he had to take. Had he spent a couple more seasons at Rangers, he would have been a prime candidate to take over from Jurgen Klopp when the German eventually calls it a day at Anfield. Now, he has risked it all by testing himself elsewhere in the Premier League, at a club with big ambitions. 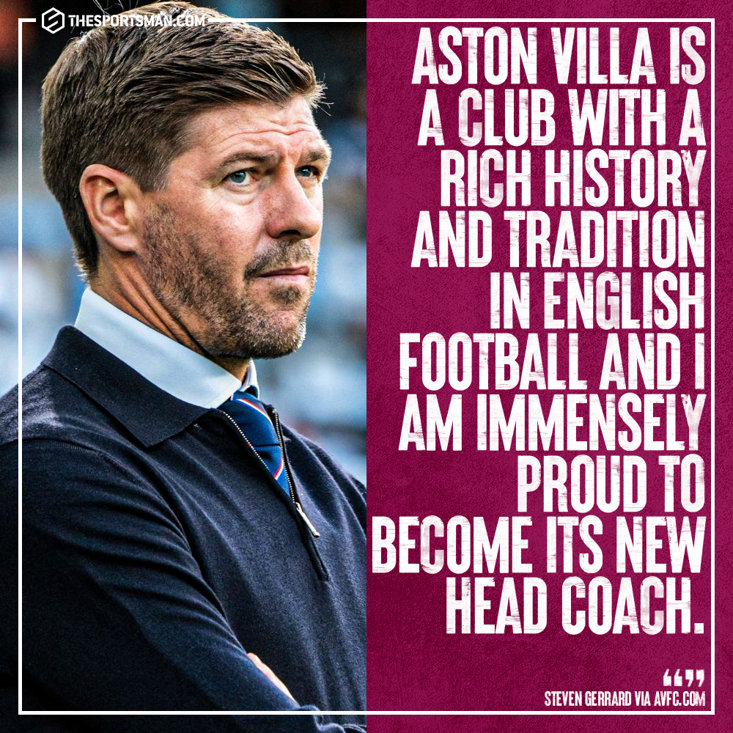 If it goes badly and he loses his job at Villa, the dream of returning to Anfield as manager is surely over. If it goes well and he can lead the club into Europe, he will have secured his place as Klopp’s successor, with Premier League experience under his belt.

“The Board of Aston Villa are delighted to appoint Steven as our new Head Coach,” CEO Christian Purslow said upon his appointment.

“It has been very clear in our discussions with him that Steven’s coaching ambitions, philosophy and values entirely match those of Aston Villa.”

With Eddie Howe in at Newcastle, and Norwich reportedly in talks with Frank Lampard, Gerrard will likely be one of three new managers taking charge of their first matches after the international break. First up for Gerrard is a game against Brighton at home, while his return to Anfield is just around the corner on the 11th December. Whether he will return as the Reds’ permanent manager now all hinges on his performances at Villa Park.