Like desperate tourists spending their final Euros at the airport on Toblerones, Bolton went on a signing spree this week like they couldn’t have even dreamt of a week earlier.

With the club seemingly hours from extinction and neighbours Bury in even more perilous danger, signs were ominous for a club which not too long ago was drawing against Bayern Munich away in the Europa League.

Thankfully, a deal was struck between the Football Ventures group and administrators who had been at the University of Bolton Stadium for months trying to keep one of the founder members of the Football League afloat.

It had been left to the club’s youngsters to gamely fulfil the opening fixtures against League One rivals (though a game at Doncaster was postponed) and their defeat at Gillingham on Saturday was not their first by a thumping scoreline with the defeat at Tranmere particularly painful. But the 750-odd fans heading home from Kent that night received some good news when the club confirmed that Keith Hill and David Flitcroft were arriving as manager and assistant manager respectively.

Both have extensive knowledge of working in the lower leagues with Hill especially respected for his work with Rochdale and Flitcroft, a former team-mate of Hill, enjoying relative success at Bury. The duo hail from Bolton which was an important box ticked for the Wanderers fans despite an emotional pull towards another potential candidate, popular former player Kevin Nolan who starred for the club during the halcyon days of the 2000s. 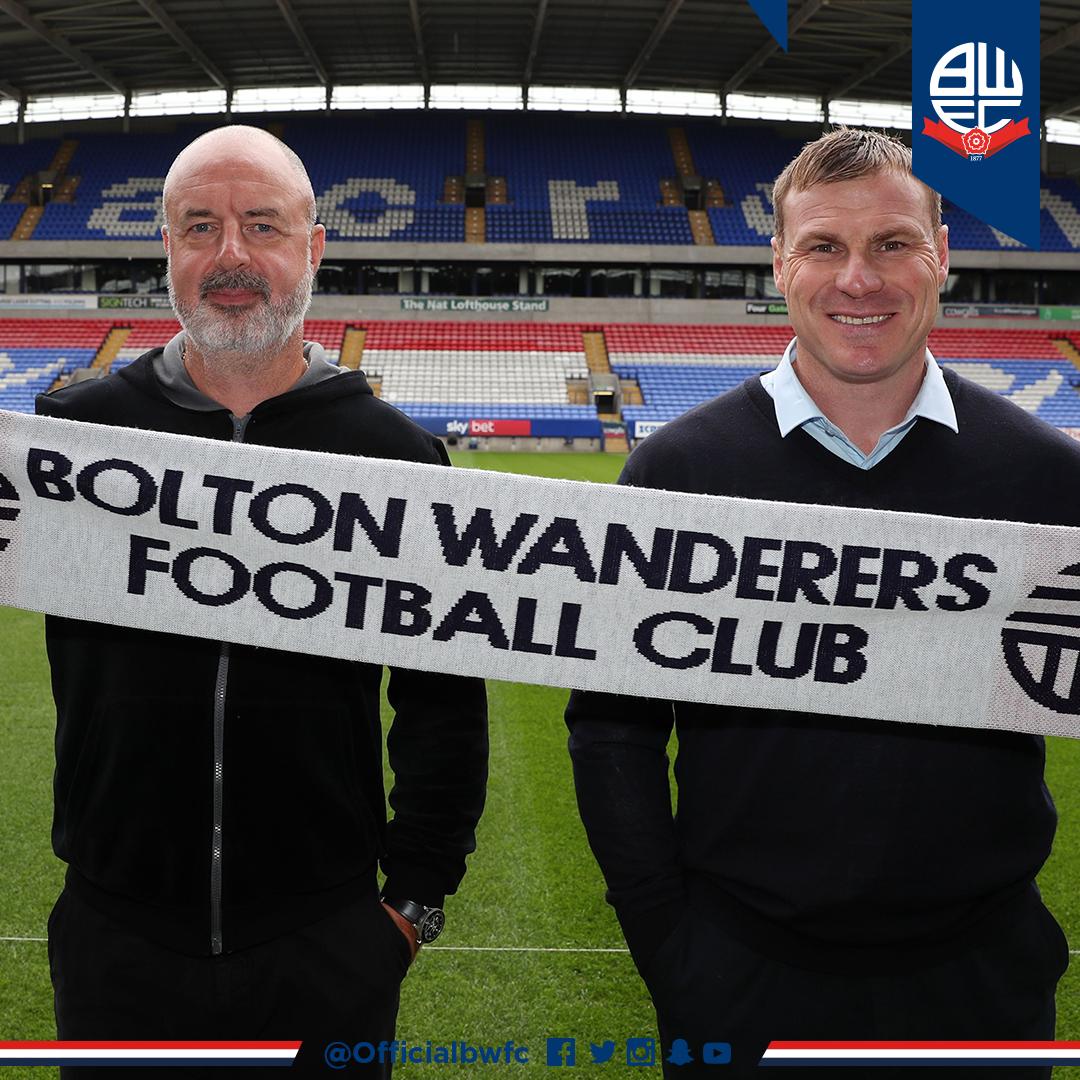 With a manager in place, the club was able to look at recruitment though pickings were slim in the final hours before the transfer window closed. Hill and Flitcroft were able to bring in nine new players on Monday, adding some much-needed experience to this young Wanderers squad.

Several of the players have been drafted in on loan or short term deals but it was hardly a buyer’s market by the time Bolton were given the green light to do some business.

First in was Stoke City winger Thibaud Verlinden who at 20 became one of the oldest members of a threadbare squad.

“At the end of the day, we seemed a little bit disappointed because we missed out on a few,” conceded Hill at his first press conference as Bolton boss on Tuesday. “But on reflection, when you consider how far we’ve travelled from that teamsheet at Gillingham to where we are now, we’ve moved mountains and we should all be proud of that.

“The next stage is getting on that training pitch and working with these players and making ourselves a good team. They have got to fit the methodology of the way we want to play - like a jigsaw - and there will be a few surprises. I mean, I don’t like sprouts but when you have them with pancetta they’re delicious.”

Hill defiantly concluded: “We are the generals and we’re in the bunker planning for war. The players will be in there fighting with us.”

More
football
Book Review - How To Run A Football Club: The Story Of Our National...
With an extended lockdown threatening the existence of a substantial portion of the United Kingdom’s [ ... ]
football
Thiago, Kalvin Phillips And The Premier League ‘Quarterbacks’...
Thanks for reaching out. You do the math. My bad. Americanisms, you gotta love ‘em. We’ve [ ... ]
football
Wayne Barton's Book On David Beckham Highlights Golden Balls'...
When historians look back at the sports scene at the turn of the millennium, there will most certainly [ ... ]
football
Rosé For Rodriguez, A Bollocking For Bilic, Five Stories You...
Managers can’t manage masks, fans are finding new ways to hail their heroes, and Jurgen Klopp [ ... ]
football
The Covid Defying Smart Helmet That Could Help Unite Football...
After the longest season in history, a mercifully short reprieve for players to catch their breath has [ ... ]
football
Get An Edge On Your Rivals This Season With The Fantasy Premier...
What are you this year? ‘Lallanas in Pyjamas’? ‘Murder on Zidane's Floor’? [ ... ]
football
Neymar's Handbags, Shy Guy Jose, And Other Football Stories...
Just like that, we’re back in the room. There’s new rules (on and off the pitch), and renewed [ ... ]
football
Celebrating The Return Of The Premier League With Its Best Ever...
After the shortest pre-season on record, even if it has felt to some of us like the longest ever, Premier [ ... ]
football
Lionel Messi Teams Up With Budweiser To Inspire Tomorrow's Footballing...
Lionel Messi, for all you do, this Bud’s for you. We’ve got to admit, it’s got a certain [ ... ]
football
From 007 to 46 Million Followers, Ten Facts You Never Knew About...
Everton finally announced the signing of James Rodriguez on Monday evening, after the Colombian superstar [ ... ]
football
The New Liverpool Book With A Groundbreaking View Of The Shankly...
September should always hold a special place in the hearts and minds of Liverpool Football Club and [ ... ]
football
The Questions We Want Answering After Watching All Or Nothing:...
“You have to be a bunch of bastards!” Annnd with that, we’re hooked. The last day [ ... ]
football
Football History Comes To Life With The Guardian’s Forgotten...
For much of 2020, the general consensus amongst the sporting community has seemingly been the desire [ ... ]
football
Book Review - Close Quarters: An Extraordinary Season On The...
He has been called the luckiest journalist in the world. When award-winning sportswriter Neil Harman [ ... ]
football
Work Out Like A Chelsea Player With The Most Advanced Football...
It claims to be the most advanced football training experience ever - imagine being trained by world-class [ ... ]
football
Blue Moon, Bubbles & Delilah - How Football Clubs Got Their...
Liverpool and Celtic fans both enjoy spine-tingling versions of ‘You’ll Never Walk Alone’ [ ... ]
football
The Lionesses Who Helped Lead The Charge In Lyon's Coupe De...
For the second time in less than a fortnight, Olympique Lyonnais and Paris Saint-Germain faced off in [ ... ]
football
Five Premier League New Boys That Are Set To Take Next Season...
A swift summer transfer window is on the cards, with just 48 days between Premier League seasons due [ ... ]
football
Bobby Robson And The Most Glittering Chapter In Ipswich Town’s...
Few in Ipswich could have predicted what was to come when Bobby Robson replaced Bill McGarry at the [ ... ]
football
How Tearing Down The Twin Towers Destroyed The Magic Of Wembley
On July 26, 1998, plans for a new Wembley were revealed to the world, promising a national stadium [ ... ]
football
Here's To The 2019/20 Premier League Season: Five Moments That...
It all began on August 9, 2019. 353 days later, a fortnight shy of a full entire year, the 28th Premier [ ... ]
football
Why Figo To Madrid Is Still Football's Most Controversial Transfer...
We’ve had Neymar, Sol Campbell and Carlos Tevez but on this day in 2000, Luis Figo completed the [ ... ]
football
Remembering Laurie Cunningham: The Football Pioneer Whose Legacy...
In 2016 the English Heritage scheme erected a blue plaque in Stroud Green, North London to celebrate [ ... ]
football
Book Review - King Eric: Portrait Of The Artist Who Changed...
Leeds. Irwin. £1million. Title. Double. Palace. Kick. Ban. Seagulls. Return. Liverpool. Double. [ ... ]
football
Replacing Rapinoe And Morgan? The Ladies Who Can Light Up The...
Write off 2020. The best thing about it is remembering how good 2019 actually was. One of the undeniable [ ... ]
football
Wembley Woe: When England Lost To Germany At Euro ‘96
In the summer of 1990 England tasted their first ever penalty shootout heartbreak when they went out [ ... ]
football
Get Ready For A Nostalgia-Fest With Italia '90 Podcast Vincerà!
Hosted by Mark Godfrey and running from June 8th to July 8th, Vincerà! is a 24-part podcast series [ ... ]
football
Harry's Heroes, Vinnie Jones And Revenge At The Battle Of San...
When Vinnie Jones started crunching San Marino players left, right and centre, it was clear the friendly [ ... ]
football
Prodigal Talent Of The German Game Is Turning RB Leipzig Into...
This article first appeared in The Sportsman on 07/12/19 What were you doing at the age of 28? If it [ ... ]
football
''I Was Really Wasted'': When Jurgen Klopp Woke Up Hungover...
This article first appeared in The Sportsman on 05/09/19 Anyone watching the Amazon Prime documentary [ ... ]