A new Test summer brings a new captain, new coach, new managing director and new approach to English men’s cricket. Does it also bring new hope? Well, we’ll have to wait and see on that front.

The raft of changes that have taken place since the disastrous Ashes series defeat at the turn of the year were necessary to say the least. The pitiful showing in Australia led to Chris Silverwood being sacked as coach and managing director Ashley Giles also losing his job. When the side subsequently submitted to a shambolic 1-0 series defeat in the West Indies, skipper Joe Root fell on his sword.

England haven’t won a series in five attempts since a Root-inspired 2-0 win in Sri Lanka to begin 2021. Their only win in 17 Test matches since beating India in Chennai last February came in the incomplete home series against Virat Kohli’s side last summer, and they trail that encounter 2-1 heading into next month’s rearranged Fifth Test at Edgbaston.

The current ICC World Test Championship standings have England placed, unsurprisingly, right at the bottom. They’re below the struggling reigning champs New Zealand, who they host at Lord’s beginning on Thursday. Below a still-unconvincing West Indies. Even below minnows Bangladesh.

In the 16 months since that win in Chennai, they have used a total of 29 players, had six different opening partnerships with the bat, nine new-ball pairings in first innings alone, named four wicketkeepers and collapsed to a total of lower than 200 on 16 different occasions. The chaos has resulted in panicked changes, and the panicked changes have resulted only in further chaos.

That is where the new appointments might make a bit of difference. Rob Key was announced as Giles’ replacement at the head of the structure shortly after the humiliation in the Caribbean. Within a few weeks Ben Stokes was named the new Test captain and shortly afterwards former New Zealand captain Brendon McCullum was unveiled as coach. 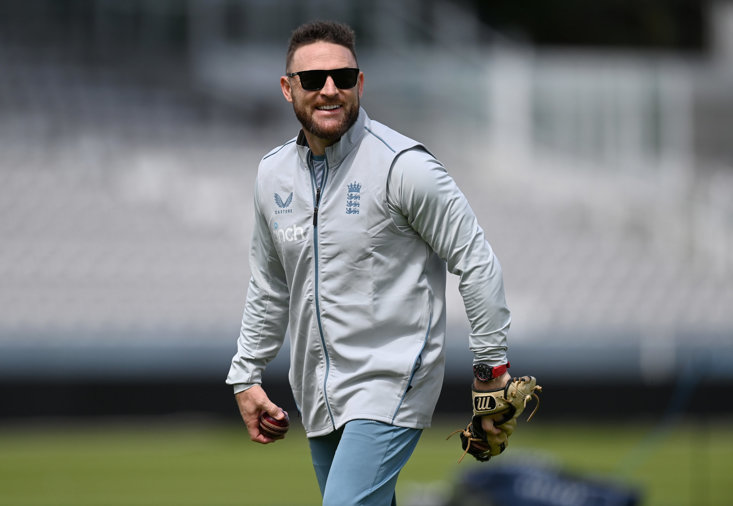 The additions give some reason for optimism, particularly in light of some of what has been said by the new men. Stokes was quick to confirm that he would have no hesitation in picking Stuart Broad and Jimmy Anderson together. McCullum backed up his skipper by insisting that he will dispense with the recent trend for rotation.

“I’ll probably get in trouble, but I like to pick the best team every time,” McCullum told the BBC. “My job will be to plan as if you’ll live forever, but live as if you’ll die tomorrow.”

And asked about Stokes’ plans to use Broad and Anderson – who have started together in only six of the last 21 Tests – wherever possible, McCullum said he is in the same camp.

“Why not? They can work together,” he responded. “They have had successful careers together.

The rhetoric is refreshing, but England cricket fans will be forgiven for awaiting actions rather than words given their side’s recent fortunes. None of the five days of the Lord’s Test have sold out as things stand, the lack of interest being reflective of the sense of apathy within the setup. But if the team can start to show the kind of togetherness, consistency and spirit that have been missing, then the supporters ought to be back through the gates in number before long.

Until then, there need to be signs of improvement. There must be a steady opening batting partnership, a consistent middle order, a new full-time wicketkeeper ordained, and a deep bowling line-up behind Broad and Anderson. None of those have been evident of late, and it will be on Stokes and McCullum to make them key features of the England side going forward.

Thursday could be the start of a new era. As England supporters, we can but hope. And it’s been a long time since we’ve had any of that.

x
Suggested Searches:
The Sportsman
Manchester United
Liverpool
Manchester City
Premier League
More
cricket
England's Greatest: Eoin Morgan Will Go Down In History As A...
When Eoin Morgan retires from international cricket on Tuesday, a gap will appear in the England dressing [ ... ]
cricket
England Secure First Home Series Whitewash In Nine Years After...
Captain Ben Stokes saluted his side after England secured their first home series whitewash in nine [ ... ]
cricket
WATCH: Henry Nicholls' Bizarre Dismissal Against England
We have just witnessed one of the most incredible things ever seen in a Test cricket match! During [ ... ]
cricket
Is It Time For England To Separate Their Test Side From ODIs...
Joe Root was England’s top scorer at the last Cricket World Cup. Jonny Bairstow leathered back-to-back [ ... ]
cricket
Duck, Duck, Excuse: Captain Morgan's On Shaky Legs As England...
We have seen two sensational ODI performances from England in the Netherlands. After hitting a world [ ... ]
cricket
England Smash ODI World Record As Jos Buttler Hits 162 in 70...
England have just done something truly spectacular. Against the Netherlands, Eoin Morgan’s side [ ... ]
cricket
Brilliant Jonny Bairstow Batters New Zealand As England Take...
Jonny Bairstow smashed England’s second fastest ever Test century as Ben Stokes’ side wrapped [ ... ]
cricket
Unstoppable Jimmy Anderson Brings Up 650 Wickets With Plenty...
When a young James Anderson conceded a no-ball as his first act as a Test bowler and went on to concede [ ... ]
cricket
Why Ben Stokes' And Joe Root's Differing Personalities Suit...
As England prepare to take on New Zealand, looking to win back-to-back Tests on home soil for the first [ ... ]
cricket
Joe Root: England's Greatest Ever Batter Now Has The World's...
If there was ever any doubt about Joe Root’s class, it is simply beyond debate after his match-winning [ ... ]
cricket
Majestic Joe Root Leads England Into A New Era With New Zealand...
The new era of English cricket started with a bang as Joe Root’s masterclass hundred led England [ ... ]
cricket
The English Cricketing Summer Won't Be The Same Without Shane...
There’s a piece of the English summer missing. New Zealand wickets fell at regular intervals on [ ... ]
cricket
Brendon McCullum Not Afraid Of England Challenges With Ben Stokes...
Brendon McCullum strolled around Lord’s, soaking up the ‘Home of Cricket’ as [ ... ]
cricket
Stokes The Skipper: However Long It Lasts, It Should Be One...
He dragged England from the brink in the 2019 World Cup final to help record the most dramatic victory [ ... ]
cricket
Joe Root's Resignation Leaves England's Men's Test Team At An...
Now what do England do? They have failed to win any of their last nine Men’s Tests, have one victory [ ... ]
cricket
Everything You Need To Know About The Hundred 2022
The Hundred is back for its second edition and with the draft having taken place earlier this week, [ ... ]
cricket
Why The Hundred Deserves The Main Billing Ahead Of Suffering...
While England’s women flew the flag proudly for the nation during the recent World Cup, England’s [ ... ]
cricket
England Suffer Final Heartbreak As Australia Win Women's World...
England suffered heartbreak on the grandest stage as history makers Australia blasted their way to a [ ... ]
cricket
Can Underdogs England Secure Most Unlikely World Cup Win vs...
England have risen like a phoenix from The Ashes and are out for redemption in the Women’s World [ ... ]
cricket
Can Heather Knight's England Complete Staggering Turnaround...
Resurgent England have produced a remarkable turnaround to keep their Women’s World Cup title [ ... ]
cricket
Root Of The Problem: Do England Need A Change Of Captain?
It’s true: England have become the laughing stock of world cricket. So, has the time come for [ ... ]
cricket
West Indies vs England Preview: Lifeless Pitches Will Kill Test...
Sir Geoffrey Boycott had it right when he said “The future of Test cricket is at stake — [ ... ]
cricket
England Once Again Fail To Find Knockout Blow In Hard-Fought...
England captain Joe Root stressed he saw plenty of “progression” from his side after a gruelling [ ... ]
cricket
Shoots Of Recovery: England Batsmen Finally Re-Pay Under Fire...
England endured an Ashes series to forget. Hammered by arch-rivals Australia, skipper Joe Root just [ ... ]
cricket
Strauss And Collingwood Era Begins As England Aim To Restore...
England’s new-look Lions begin their three-match tour of the West Indies on Tuesday desperate [ ... ]
cricket
Australian Cricket Legend Shane Warne Dies At 52
Australian cricket legend Shane Warne has died at the age of 52 after a suspected heart attack. Warne, the [ ... ]
cricket
Australia, New Zealand Or England: Who Will Win The Women's...
We’re back in New Zealand for a women’s Cricket World Cup, 22 years after the last tournament [ ... ]
cricket
England's Women Can Redeem Winter Of Discontent With World Cup...
England head to this year’s ICC Women’s World Cup in New Zealand hungry to win their [ ... ]
cricket
England Cricket In Chaos: More Questions Than Answers, But What's...
England have become the laughing stock of world cricket this winter.  It was a shocking showing [ ... ]
cricket
England's Women Round Off Dismal Ashes Winter With Another Heavy...
England’s miserable Ashes came crashing to a horrible end as they were resoundingly thrashed by [ ... ]