India are already on the verge of elimination from the Men’s T20 World Cup thanks to a humbling eight-wicket defeat to New Zealand on Sunday, their second successive loss to begin the tournament.

After a 10-wicket thumping at the hands of Pakistan last Sunday, their first ever loss to their bitter rivals in any men’s World Cup, their latest reverse in Dubai means that they are left needing a miracle to reach the semi-finals.

Even if they win all their remaining matches, the pre-tournament favourites either need New Zealand to be beaten by Scotland, Namibia or Afghanistan or for Pakistan to lose both of their outstanding Group 2 fixtures – against Namibia and Scotland – if they are to progress. It is quite the disappointment for a side many had tagged as the team to beat.

India got off to a slow start with the bat in Dubai and never really recovered. Ishan Kishan was pouched in the deep by Daryl Mitchell off Trent Boult in the third over with his team just 11-1, and while Rohit Sharma and KL Rahul looked a fair bet to give them a decent base the pair were dismissed in quick succession to leave India 40-3. And after Kohli holed out to long-on for just nine at 48-4, it was always going to be a long way back.

Hardik Pandya’s 23 and a 26 not out off 19 balls from Ravindra Jadeja led them to a total of 110 for 7, a mark far better than they had looked likely to reach at one point but still a good 40 or more runs shy of being competitive against one of the world’s greatest teams in all formats over recent years.

BLACKCAPS
@BLACKCAPS
Trent Boult has another! His 50th in T20I cricket for the BLACKCAPS. Thakur goes without scoring caught by Martin Guptill. India 94/7 in the 19th over in Dubai. LIVE scoring | #T20WorldCup 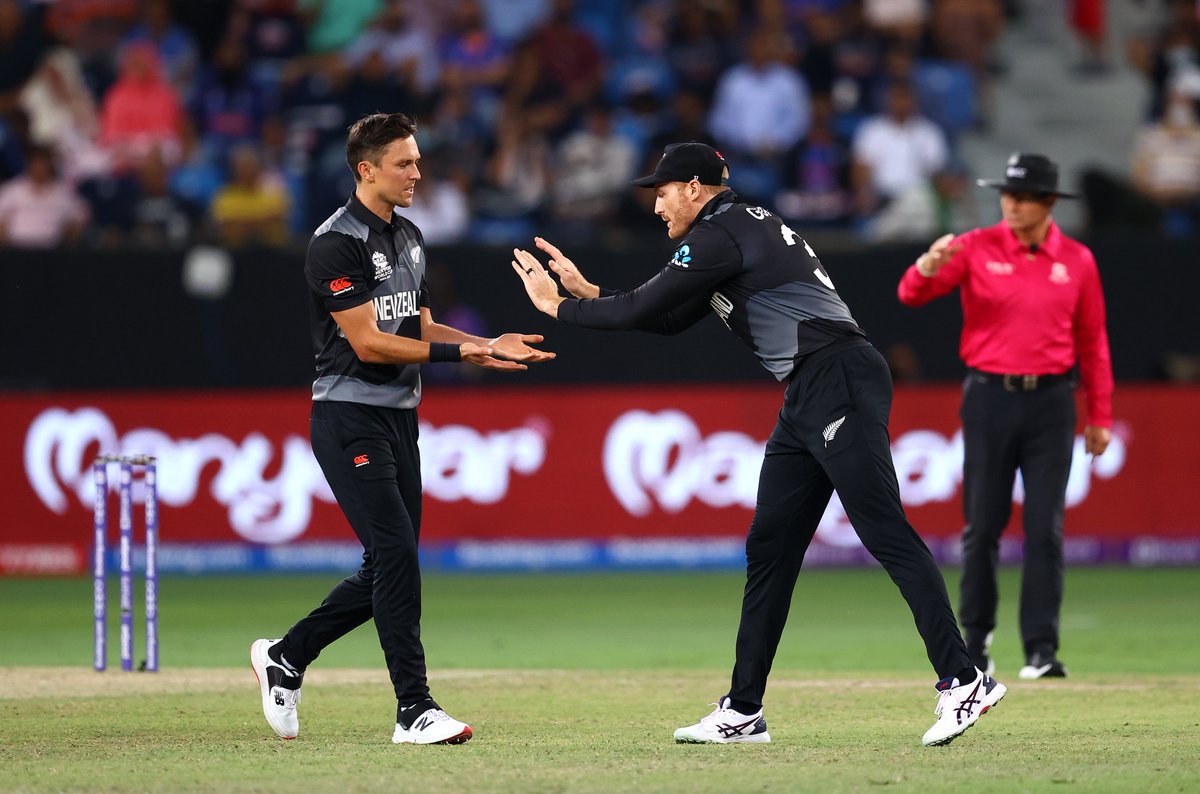 After their heroics with the ball, with Boult’s 3 for 20 making him the pick of the bowlers, Kane Williamson’s side were never in danger of not chasing down the 111 required. Martin Guptill clobbered a quick-fire 20 off 17 balls inside the first 3.4 overs before being deceived by Jasprit Bumrah’ slower ball, but Mitchell and Williamson raced confidently towards the target without taking too many chances.

Mitchell fell just short of a half-century when he was caught in the deep off Bumrah for 49. But Devon Conway joined Williamson to help the Blackcaps score the remaining 15 runs required with a full 5.3 overs to spare, the skipper helping himself to 33 not out from 31 balls.

x
Suggested Searches:
Manchester United
Liverpool
Manchester City
Marcus Rashford
Premier League
More
cricket
Cummins Takes Australia Captaincy Just When Cricket Needs Leadership...
As expected, Pat Cummins is the new Australia Test cricket captain ahead of the forthcoming Ashes series. [ ... ]
cricket
Cricket Faces A Long Road Back After Azeem Rafiq Revelations
To call the revelations that have rocked cricket over the last few weeks ‘damaging’ would [ ... ]
cricket
The Ashes Preview: England Relishing Battle With Australia Down...
Sport gets the juices flowing – and none more so than a mouth-watering Ashes series to savour. [ ... ]
cricket
Road To Redemption: Australian Cricket Can Finally Put 'Sandpapergate'...
Australian cricket was brought to its knees by the now infamous ball-tampering scandal.  ‘Sandpapergate’, [ ... ]
cricket
Mitchell Marsh Inspires As Australia Beat New Zealand To Clinch...
Mitchell Marsh delivered the performance of his life to secure Australia's first ever T20 World [ ... ]
cricket
England Dumped Out Of T20 World Cup By New Zealand As Mitchell...
England suffered a gut-wrenching defeat in their World Cup semi-final as New Zealand, inspired by Daryl [ ... ]
cricket
England's Semi-Final Vs New Zealand To Be Decided ''By The Barest...
“England have won the World Cup, by the barest of margins! By the barest of margins!” Two [ ... ]
cricket
Yorkshire And English Cricket Need Full Disclosure Amid Deplorable...
These are pretty horrendous times to follow Yorkshire cricket. The racism scandal which has rocked not [ ... ]
cricket
Brilliant Buttler Ton Moves England Tantalisingly Close To Men's...
A sensational century from Jos Buttler inspired England to a vital 26-run victory over Sri Lanka in [ ... ]
cricket
England Are The Early Pace Setters At T20 World Cup After Bangladesh...
It is still early days at the T20 World Cup, but from what we have seen so far, Eoin Morgan’s [ ... ]
cricket
Influential Ben Stokes Is Back - But Can He Inspire England...
If there is one man that can save England Down Under, it is Ben Stokes. He is the beating heart of Joe [ ... ]
cricket
Double King Or Old News? England & Morgan Face Moment Of Truth...
Oh, how quickly sport moves. As England approach their first major white-ball tournament since that [ ... ]
cricket
Moeen Ali Retires From Test Cricket Having Broken Down Barriers...
After 64 matches, five centuries and 195 wickets, Moeen Ali has called time on his England Test career [ ... ]
cricket
England's All Too Predictable Batting Collapse Costs Them Test...
Another inevitable England batting collapse. On a strangely sunny Monday morning in early September, [ ... ]
cricket
Consistency Now Key As England Look To Repeat Headingley Heroics
“Just when I thought I was out, they pull me back in…” There was a moment there where [ ... ]
cricket
England's New Look Line-Up Already On The Back Foot As India...
In the week that saw Lord Ian Botham appointed trade envoy to Australia, England’s current crop [ ... ]
cricket
Without Everyone Playing Their Part, England's Cricketing Struggles...
Former England Test cricket bowler Ryan Sidebottom believes England can enjoy success again if the whole [ ... ]
cricket
England's Batting Line-Up Is Shoddy, But The Lack Of Depth Is...
An Englishman with a bat in front of three sticks of wood has now become as nervy of a spectacle as [ ... ]
cricket
England's Final Day Defeat To India Was Inevitable, And Root...
A disaster. A shambles. An embarrassment. Several words have been used to describe England’s fifth [ ... ]
cricket
Rain And Root Deny India, But England Can't Keep Relying On...
In the end, the rain finished off the job Joe Root had started. The First Test between England and India [ ... ]
cricket
The Greatest Test Match: England's 2005 Edgbaston Ashes Win...
It felt like the peak of Test cricket at the time. Arguably, it remains the greatest ever game in the [ ... ]
cricket
Time For Joe Root's England To Find Some Consistency - Sidebottom
Former England Test bowler Ryan Sidebottom insists that Joe Root’s side must turn in a stirring [ ... ]
cricket
Ben Stokes' Break From Cricket Highlights The Strides Made On...
It is a truly wonderful thing that Ben Stokes will not be in England’s Test squad to face India [ ... ]
cricket
Ryan Sidebottom: England's T20 Hopes Have Received A Huge Boost...
We’ve seen the likes of Jonny Bairstow, Ben Duckett and James Vince flashing the bat to great [ ... ]
cricket
Ryan Sidebottom: The Hundred Is ''Off To A Great Start'' After...
Ryan Sidebottom believes cricket's divisive new tournament 'The Hundred' proved [ ... ]
cricket
Ryan Sidebottom: Why The Hundred Is A Game Changer For Women's...
For women in particular, The Hundred is huge. Ahead of the first ball being bowled it has had its doubters [ ... ]
cricket
England Can Dream Of Another World Cup Win, Two Years On From...
“By the barest of all margins.” The inimitable Ian Smith couldn’t have summed it up [ ... ]
cricket
The Newcomers Looking To Help Fire England To An ODI Win Against...
An inexperienced England are facing a huge test as they have been forced to name a brand new 18-man [ ... ]
cricket
Perennial Finalists New Zealand Finally Come Good To Win World...
New Zealand finally got the job done. In 2015 they were the entertainers of the tournament at the Cricket [ ... ]
cricket
Sophia Dunkley Is England's Newest Cricketing Icon That Can...
Sophia Dunkley is a history maker. She became the first black woman to play Test cricket for England’s [ ... ]