Boxing
News
'TNT' Tommy stepped up in class on the undercard of his brother's WBC title defence
Joey Mills
21:44, 23 Apr 2022

Tommy Fury won a six-round contest with Daniel Bocianski, putting the Pole down in the fifth round on the way to his eighth victory. While this fight did not garner the global interest a bout with influencer turned moonlighting boxer Jake Paul would, it was a far greater test than that proposed scrap would offer. Bocianski represented a step-up in class for the 22-year-old brother of Tyson Fury, bringing a 10-1 record with him to Wembley. The Pole had never fought outside his homeland, but showed plenty of bravery in there with Fury.

The first two rounds saw ‘TNT’ work intelligently behind his jab, showing an impressive amount of patience for a novice pro. Fury uncorked a big right hand in the second, showing for the first time he perhaps had too much firepower for Bocianski. Tommy out-gunned his foe again in the third, but had to take a cuffing right hook that caused him to hold momentarily.

The dangers of war were written on the face of the visitor in the fourth, as a nasty mouse appeared on Bocianski’s eye. Fury won the round by working at range, while holding on the inside. The fifth round was Fury’s most impressive of the evening. It started inauspiciously, as he wrestled his opponent to the ground. Bocianski would find himself on the ring canvas again, but this time it would come courtesy of a beautifully picked straight right through his guard. The thud was audible, and the referee took a long look as Fury followed up with combinations.

The fight did make it to the six though, and it was a lowkey final round. There was more activity from Fury, and he was rightly awarded the round on the scorecards. In fact, ‘TNT’ took every round when the scores were read out. He wasted no time calling out Paul in his post-fight interview, and on this evidence he would have no trouble dispatching the over-hyped day-tripper. 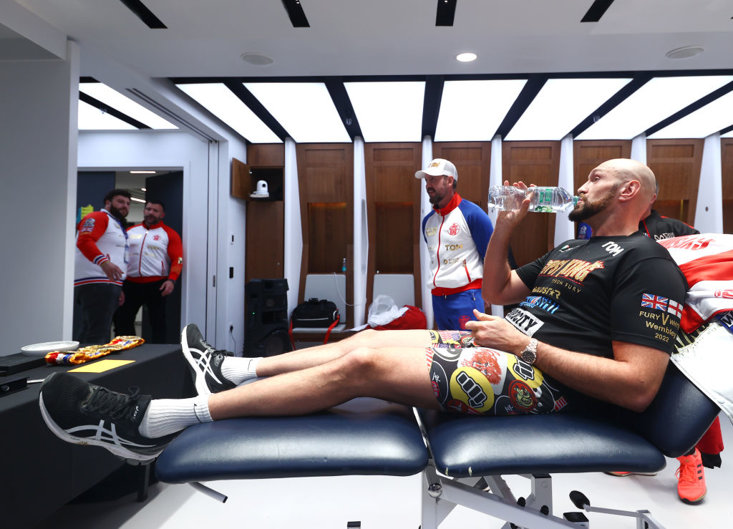 taking it all in: tyson fury enjoys the evening's undercard

Unbeaten featherweight Nick Ball was impressive against former British and Commonwealth champion Isaac Lowe. The pair contested a good action fight for the WBC silver bauble, with Ball prevailing via seventh round stoppage.

Lowe started well, boxing at range behind a formidable jab. His night took a turn in the second, when Ball buckled his legs with a hard left. A mammoth left hook from Ball put Lowe down on the ropes, and the ‘Westgate Warrior’ did well to hear the bell. A nasty clash of heads in the following round had blood streaming from Lowe’s eye, but he battled on. Lowe enjoyed some success, but Ball was a pocket rocket, constantly setting the pace with lightning combinations.

The end came in the seventh, when Ball stopped Lowe dead in his tracks along the ropes. Ball stepped back and with Lowe motionless, it looked like the referee would intervene. Criminally, he did no such thing. Ball was allowed to land a brutal, unanswered uppercut. It is these exact circumstances in which fighters can be gravely injured, and it is truly a blessing Lowe wasn’t in this case.

Ekow Essuman retained his British, Commonwealth and IBF European titles over Darren Tetley via SSSSSSS. This 12-round contest was a tight, cagey affair. Essuman looked to get in and out at speed, while Tetley planted his feet and looked to establish his jab. The champion pulled away with the more eye-catching work, with his speedy combinations in the latter half of the fight seeing him home.

Heavyweight prospect David Adeleye moved to 9-0 with a fourth round stoppage win over Chris Healey. The portly Healey did not give off the air of an elite athlete, but he came into the ring with the Central Area heavyweight belt to his name. He offered little to trouble Adeleye though. Adeleye caught him with a clean left hook in the first, and had the Stockport man on the end of some hurtful body shots throughout. The end came when Adeleye landed a crunching left followed by a right hand, causing the referee to wave the contest off in the fourth.