On March 7 2009, a slightly-built 17-year-old from Mogi das Cruzes, São Paulo, walked out onto the pitch of the Estádio dos Amaros in Itápolis, Brazil for the final thirty minutes of a Paulistão game against Oeste.

Around 6,000 spectators had congregated in the stadium for the match, but it was the rambunctious travelling Santos support who were already readily booming the teenager’s name as manager Vágner Mancini allowed him to emerge from the sidelines. The fans in attendance were witnessing the first tentative professional footsteps of the person who would, eight years later, become the most expensive footballer in the history of the beautiful game.

His half hour debut yielded no goals, but, a swift cut through the Oeste defence with a shift of his right foot and an audacious attempted shot denied by the woodwork later, evinced the potential of the young Neymar Jr. who had already created a buzz around Brazil through this performances within the Santos academy set-up.

At just 11 years of age, Neymar had been spotted by Santos and in 2003 signed a youth contract with the club, the same route taken more than half a century earlier by Pelé, the only player to ever win three FIFA World Cups.

In 2020, another prodigious 11 year-old has been given his individual spotlight, thanks to his own audacious trickery in a night-time game on the streets of São Luis.

Thanks to a short video which has detonated across social media, diminutive Brazilian youngster ‘Caio’ has now been granted a chance to follow those hallowed footsteps of his celebrated countrymen and shine at Santos.

thesportsman
@TheSportsman
Amazing news to bring you! ðŸ™ŒðŸ»
This little lad, called Caio, has been invited to train with @SantosFC after his goal went viral this week.
Even @MarcusRashford gave him a nod of approval today. Brilliant. ðŸ‡§ðŸ‡·

The clip in question depicts Caio darting and dazzling barefooted around an un-uniformed defence towards a miniscule net, only to see his accurately placed attempt saved by a member of the opposition. Unfortunate as that was, and seeing the ball moved up towards his own goal, Caio has no time to wallow in order to save himself for falling down an inconveniently placed hole by the side of ‘the pitch’.

Mercifully, it’s not ciao to Caio, who regains his footing, makes his way back onto the road, and takes full advantage of an expertly placed pass from his goalkeeper. Caio cheekily accepts the lofty ball and instinctively produces a hypnotic glancing no-look side-foot to slot it into the back of the tiny goal.

The video, made by a bystander, has now been viewed and enjoyed by over 5.5 million people across the globe, including professionals Marcus Rashford, Antonio Valencia, and Jan Åge Fjørtoft - all of whom have given their seal of approval. To put this in perspective, the peak viewership for an English Premier League fixture this season, Liverpool versus Man Utd, was slightly over 4 million.

Demonstrating the power of social media, with the global impact that the video made, it eventually reached the attention of a Santos coach. Unfortunately upon being impressed, he was unaware in which city Caio resided in, in a country that takes up half of South America and has a population of over 200 million people.

Whilst the coach was trying to track the talented Caio down, Alexsandro Campos Rodrigues was already marching to the boy’s homestead with a present in tow: a brand-new gleaming white pristine Santos kit.

Alexsandro runs the Meninos da Vila soccer school that has now taken Caio on board. Meninos da Vila, which Alexsandro began in 2017, represents Santos FC in São Luís, the capital and largest city of the Brazilian state of Maranhão. Santos has similar units spread across the country in looking for the next Neymar Jr. or Pelé.

“We have students of various ages, some as young as three - up to 15 years-old,” Alexsandro tells The Sportsman, “We work with children from places where violence has greater numbers so children can play football as a way out of this social condition.”

“It is very common practice in Brazil for children to play soccer in the street, especially in poor neighbourhoods,” he explains, “But Caio, who is an excellent player, somehow managed this incredible move. So a friend, who knows about my football school, tagged me in the video.

“I looked for information about Caio through the people who were commenting on the video and after much searching I found and contacted a neighbour of his family who gave me Caio’s address.

“Even before the Santos coach became aware of Caio, myself and the team had already decided we were going to take Caio a gift. This is the kit you see him wearing in the photo.” 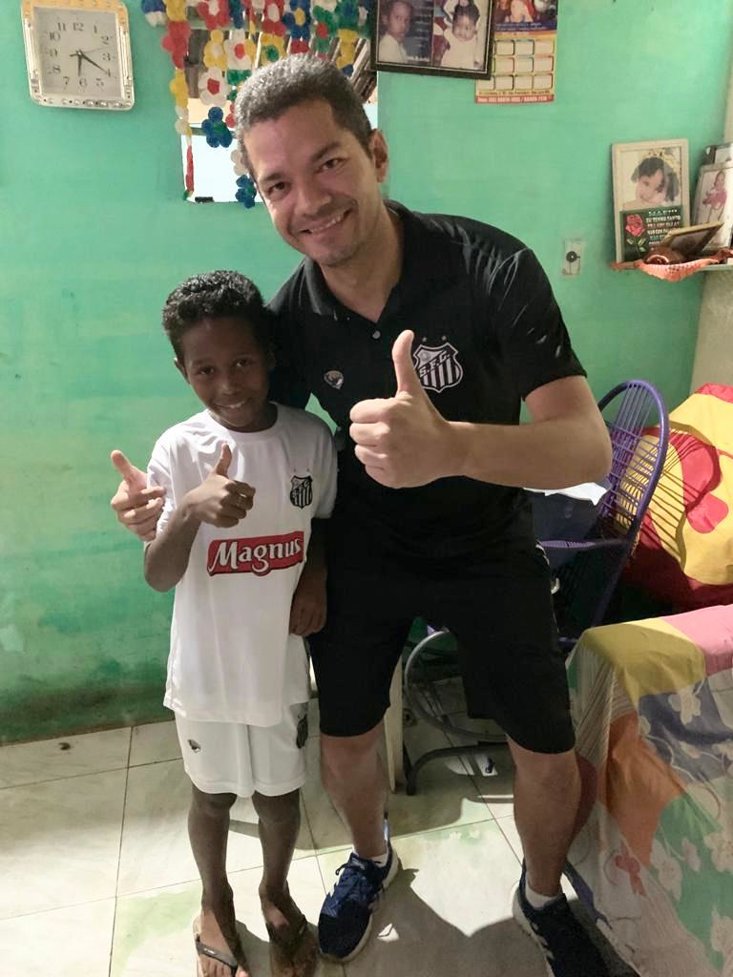 After tucking away his goal, the knowing Caio replicated the famous ‘Siiiu’ stance of Cristiano Ronaldo, his favourite footballer alongside, unsurprisingly, Neymar Jr. Meanwhile, the aforementioned Santos coach has now also provided Caio with a trial at the Vila Belmiro stadium in São Paulo, hopefully providing him with the chance to mimic the initial trajectory of that latter icon.

“If he succeeds, he will be joining the club which introduced Neymar to the world,” says Alexsandro. However, he elucidates that there is an underlying but fundamental importance as to why this is a golden and unique opportunity, and one not to squander.

“Caio’s family is a family with many needs. They live in a very poor neighbourhood of our city. He has five brothers and his father is a fisherman. His parents are understandably scared with the speed of it all. They have few resources so we really want Caio to be able to do well in this trial and make their dreams come true.

“Caio’s a boy of great joy and energy. He was ecstatic when we met him and didn’t seem to believe what was happening.

“He went very silent but his eyes did all the talking. He thanked us a lot and said football is what he liked to do the most and that he’d love to be a professional player.”

Caio now awaits an opportunity to start becoming just that and dazzle the eight-time national champions.

“There is still a long way to go,” Alexsandro says, “But we hope, above all, may God bless his life and he achieves his dreams.”