Us Sports
News
Can the Bengals get over the line after an incredible season?
Sam Penfold
15:00, 08 Feb 2022

Joe Burrow’s season-ending ACL injury last year was devastating but the franchise knew what they had in him and matched his ambitions in the 2021 free agency, signing the likes of Riley Reiff, D.J. Reader, Mike Hilton, Trey Hendricikson and Chidobe Awuzie. Joe Burrow was a key factor in bringing in some of these names while his pre-existing chemistry with Ja’Marr Chase would prove vital as the season unfolded. Finishing the campaign with a record of 10-7 it wasn’t a convincing playoff push but nevertheless they gave themselves the opportunity to succeed and they haven’t looked back.

Where do the Bengals look strong?

The Bengals are an incredibly strong team offensively. They averaged 27 points per game (PPG) during the regular season and while averaging 24 PPG so far in the postseason. That is largely down to the main man, Joey brrrr Burrow. The LSU alumni is putting his stamp on the NFL this year and has played out of his skin for a majority of the campaign. His record breaking day against Baltimore in Week 16 where he threw for 525 yards will go down in Bengals history. He also now owns the record for most 30+ yard TD’s in a single season (16). A quarterback is nothing without his receivers however, and the trio of Ja’Marr Chase, Tee Higgins and Tyler Boyd have put up some incredible numbers this year, accumulating an impressive 3,374 yards between them. Ja’Marr Chase quite rightly steals the plaudits with a 13TD regular season and the best ever by a rookie  receiver, he has made the league his own and silenced his doubters in the process. One final mention must go to running back, Joe Mixon, who has been an ever-present for the Bengals in the backfield and with just one more game left, Bengals fans will be hoping he can add to his TD tally when it matters most. 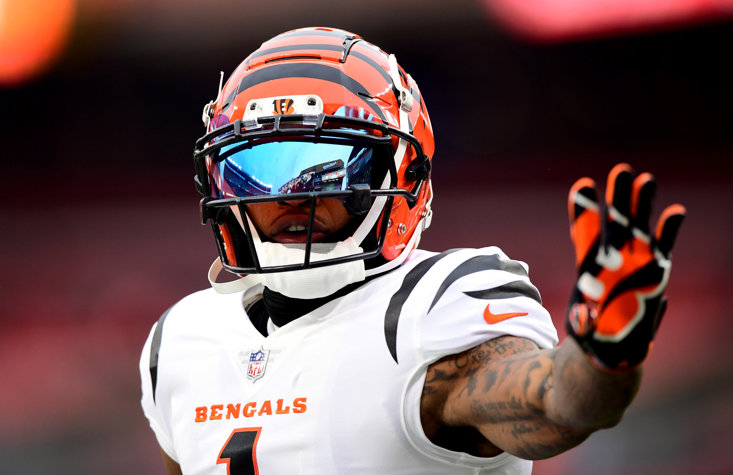 Cincinnati are actually pretty well balanced on defence. Sam Hubbard and the aforementioned Trey Hendrickson have caused havoc off the edge and quarterbacks have felt it all season as the pair combined for 116 tackles, 26.5 sacks, 28 tackles for a loss and six forced fumbles. Safe to say, they’ve been damn good at their job this year. Linebackers Wilson Logan and Germaine Pratt deserve their credit as they have totalled 191 tackles over the duration of the campaign, with 51 of those happening in the last three games while also nabbing two interceptions in the process. The Bengals secondary looks to be in good shape with Jessie Bates III and Vonn Bell clearing up from the safety position while Tre Flowers, Mike Hilton, Chibode Awuzie and Eli Apple play their part marshalling some of the NFL’s most talented wide receivers. To shut out Kansas City in the manner that they did in the Conference Championship tells you an awful lot about a unit’s character and resilience which is something you cannot overlook when the game is on the line.

Where do the Bengals look vulnerable?

The loss of C.J. Uzomah versus the Chiefs didn’t matter too much in the end but it certainly takes away a reliable attacking outlet for Joe Burrow which limited their options last time out. Having gone away for two weeks and had time to work with backup Tight end Drew Sample in case Uzomah isn’t able to recover from the knee injury that took him out of the game at Arrowhead. The other cause for concern would be the slow start the defence made against the Chiefs. The defence didn’t seem to get switched on until the game was approaching halftime and you have to fear that if they do that again, the Rams will be out of sight. Although most were thinking the same during the Chiefs game and look how that turned out.

NFL Network
@nflnetwork
.@cj_uzomah really ripped his leg brace off to get the crowd hyped at the @Bengals rally. 😂
640
5799

Quite simply you should expect excitement. If you have a weak stomach or are easily impacted by nerves then give this game a miss because it’s going to be one hell of a journey over the four quarters in Los Angeles. Joe Brrrr-urrow and co will have themselves a stern test against the Rams defence but if he can pull out a few more Houdini acts to make massive plays then it might just be a fine day to be Bengal. Also anything within 55 yards is money for Evan McPherson at the moment which will breed confidence throughout the special teams unit. After all, it’s only the Rams, WHO DEY?