The opening day of the Athletics competition at the Commonwealth Games saw a duo of English athletes break new ground to secure a historic medal.

Hammer thrower Nick Miller stunned the entire field with an enormous throw of 80.26M. Breaking the British national record as well as the 12-year-old Commonwealth Games record. Two rounds into the competition Miller was in danger of elimination after being placed in 11th. Then in the third round he moved up with a throw of 76.48M before producing the 80-meter plus performance.

"It is just incredible to win the gold," Miller told BBC Sport.

"Things got a little more serious last year. I got married and that changed my perspective on things.

"Everything seems to be slotting in to place and this result is the end of a lot of effort over the past year."

Improving on his silver medal from the 2014 Games, 24-year-old Miller is the first athlete in the world to throw over 80 meters this year in an official competition. In 2017 that distanced would only be beaten by two people. Triple Only world champion Pawel Fajdek and Wojciech Nowicki.

Tom Bosworth also set a new British record in the 20K walk. He broke the 80-minute barrier for the first time with a personal best of 79:38. Just four seconds adrift from the gold medal.  The performance has earned him his first medal of any sort at a major event. Providing a consolation prize for his disqualification from the 2017 world championships in London.

"I like to put on a show and I'm glad Dane walked away with the medal," he said. "Some people doubt what race walking is about - well we put on a show there.

"It was entertaining and that is what the sport is all about."

In what was the first athletics event of the games to take place, the 28-year-old kept in the leading pack throughout the entire race. In the closing stages it was a showdown between him and race favourite Dane Bird-Smith. With the Australian powering his way to the finish line.

Bosworth is the first English race walker to win a Commonwealth Games medal since 1990. 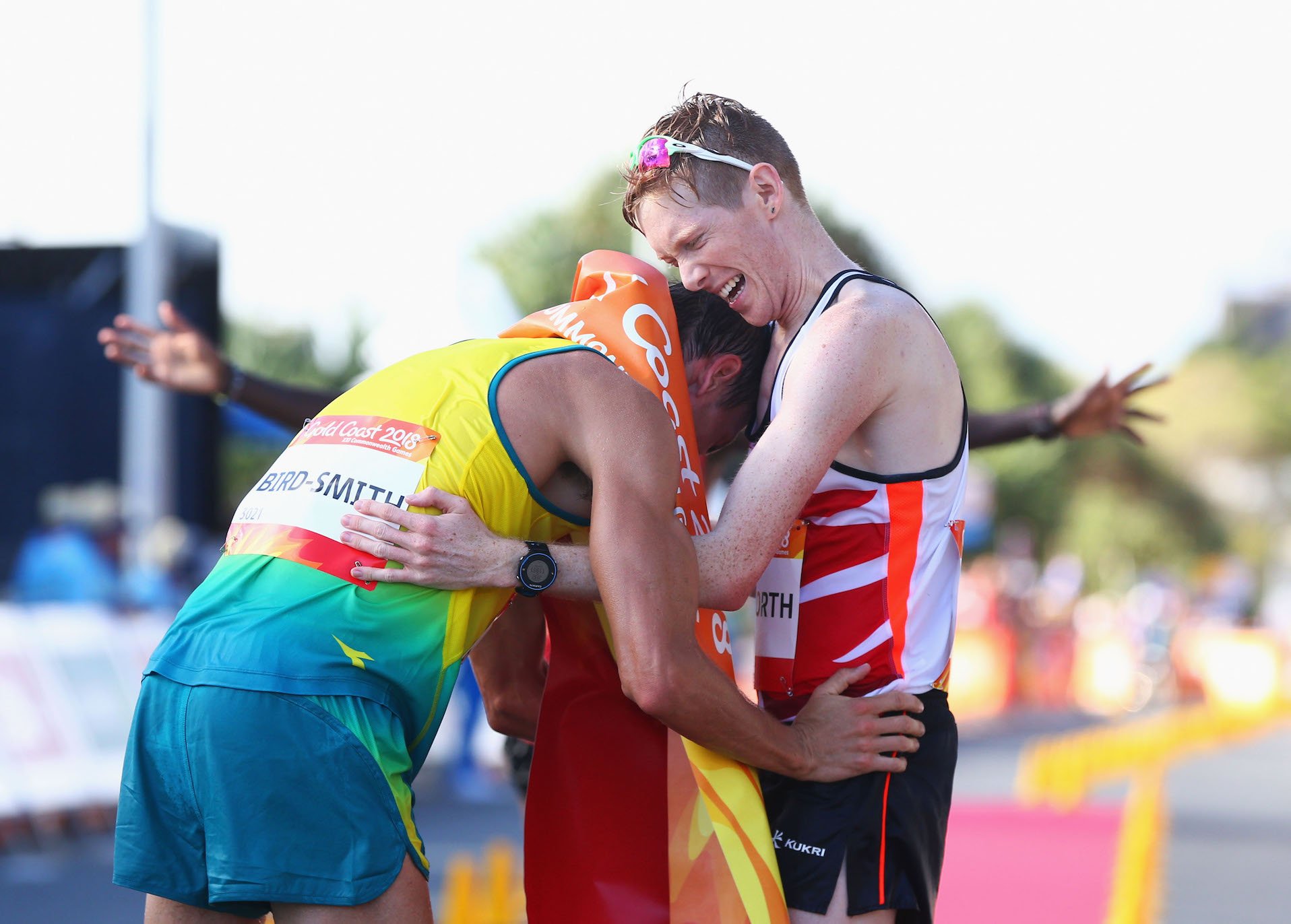 Tom Bosworth
@TomBosworth
Proud, so so Proud. Thank you to everyone for your messages! Thank you for all the support from my family here and @harryd1010 and fam at home. This is redemption from 2017.
My support team, @andidrake @camcorbishley @CWilko97 and everyone else in that...
8
155

England has two chances of adding to their medal tally in the finals of the 100M sprints. On Sunday the heats took place with Adam Gemili reaching the final with the third quickest time of 10.11 seconds. After winning his first round heat, Gemili came finished second in the semifinals behind Jamaica's Yohan Blake.

Crossing the finish line Gemili looked to be in some sort of discomfort, but he is yet to comment on if there is an issue. He is the only British athlete to reach the final after Harry Aikines-Aryeetey narrowly missed out.

In the women’s section, Asha Phillip heads into the tomorrow's medal race with the fastest time. In her semi-final, she won in a time of 11.21 seconds. 0.11 seconds outside of her personal best. Philip was part of the British 4x100M relay team that won a bronze medal at the 2016 Olympics.

Outside of the English camp, Olivia Breen game Wales something to celebrate on the track after setting a new commonwealth games record in the T38 long jump. Breen, who has cerebral palsy, produced a jump of 4.86M. Half a meter further than her nearest competitor in the field.

Breen is the third Welsh athlete to win a gold in the Gold Coast after Gareth Evans (weightlifting) and Elinor Barker (cycling). 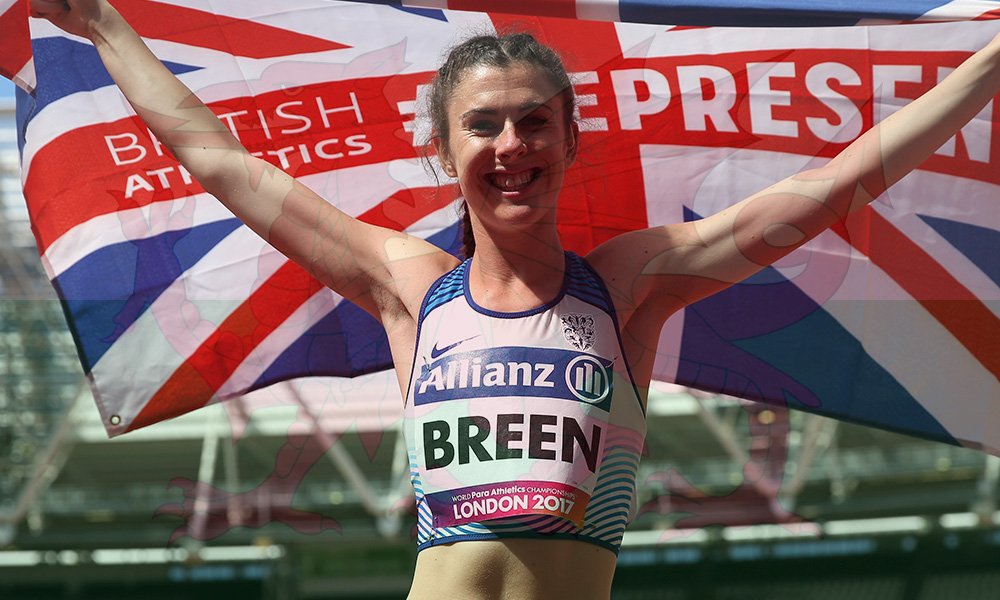 13
127
More
athletics
Visa Sponsorship Renewal Gives Olympics Welcome Boost In Uncertain...
Visa have extended their sponsorship of Olympic athletes until 2021, after this summer’s games [ ... ]
athletics
How Marathon Runners Can Stay Focused And Feeling Good During...
There are many of us who should have been making our final preparations for a marathon right now. With [ ... ]
athletics
Team GB's Tom Bosworth May Not Travel To Olympics Over Coronavirus...
Team GB’s top racewalker Tom Bosworth may not travel to the Olympic Games this summer, if we do [ ... ]
athletics
Gender Balance Is A Reality At Tokyo 2020 Thanks To Flag-Bearer...
The Olympics Opening Ceremony is one of the most iconic events on the planet. Every country’s [ ... ]
athletics
Five Tokyo 2020 Stars Who Will Be Surfing, Skating And Climbing...
157 days. That is all that is left between today and the opening ceremony at the Tokyo Olympics, the [ ... ]
athletics
Dina Asher-Smith Will Welcome Fraser-Pryce's Decision To Do...
The stage is set. The gauntlet has been laid down. In Tokyo, Team GB’s Dina Asher-Smith will be [ ... ]
athletics
Book Review: The Runner By Markus Torgeby
As the publishing industry is the envy of the Premier League, in that it takes a midwinter break and [ ... ]
athletics
The Exo-Skeleton Suit That's Helping Smash Limitations And Break...
With all the criticism surrounding VAR in football at the moment, it is important to take a moment to [ ... ]
athletics
The Running Trainers So Good They Could Be Banned By World Athletics
Ever heard of the running trainer that made athletes too quick? Nike’s record-breaking running [ ... ]
athletics
Taking The Knee & Hand Gestures Banned From ''Politically Neutral''...
More than half a century after Tommie Smith and John Carlos created one of the most prevailing, [ ... ]
athletics
Alistair Brownlee Sets His Sights On A Tokyo 2020 Triathlon...
The lure of Tokyo 2020 is just too much for Alistair Brownlee, who has said he aims to compete at this [ ... ]
athletics
With Lessons In Hygiene And Hydration, Team GB Targets Medal...
UK Sport are hopeful that the 2020 Olympics in Tokyo will be the most successful of all time for Team [ ... ]
athletics
Paris Olympics 2024: Surf’s Up...10,000 Miles Down The Road,...
Excited for Tokyo 2020 yet? Well before we dive headfirst into athletics action in Japan there’s [ ... ]
athletics
Coaching US Runner Jordan Hasay Is The Next Chapter For Paula...
Paula Radcliffe is remembered for many things, being a world record holder, crouching to relieve [ ... ]
athletics
Nick Butter Becomes First Person To Run 196 Marathons In 196...
The Sportsman’s favourite marathon man Nick Butter has completed his incredible target of running [ ... ]
athletics
Groundbreaking Gene Testing Could Spell The End Of Doping In...
Doping has long been the scourge of sport. Some of the most high-profile names have been found [ ... ]
athletics
Top Athletes Left In Shock As 200m Is Cut From Diamond League...
The Diamond League has announced that the 200m will be one of four events cut from its core events in [ ... ]
athletics
Hand Washing And The Marginal Gains Helping Team GB Succeed...
Hygiene will be a key component as Team GB look for marginal gains at Tokyo 2020. It may sound a little [ ... ]
athletics
Nothing Left To Chance As Eliud Kipchoge Attempts First Two-Hour...
This weekend, the fastest marathon runner ever will attempt to record an athletic achievement that will [ ... ]
athletics
Five Things We Learned From The World Athletics Championships
The controversy-stricken World Athletics Championships came to a close on Sunday evening with Great [ ... ]
athletics
Katarina Johnson-Thompson's Journey from Imposter Syndrome To...
Prior to this year, the World Athletics Championships has consisted of tears, despair and heartbreak [ ... ]
athletics
Smooth And Efficient Noah Lyles CAN Beat Bolt's 200m World Record
“The man ran incredible times... I'm going to break that, and then I'm going to get even [ ... ]
athletics
Empty Seats Take Shine Off Dina Asher-Smith’s 100m Silver Medal
As Dina Asher-Smith took to the starting blocks for the women’s 100m final, silence descended [ ... ]
athletics
Luvo Manyonga Made The Long Jump From Crystal Meth Addict To...
Amongst all of the elite athletes gathering at the World Championships in Doha, not many have a story [ ... ]
athletics
On This Day in 1936: Jesse Owens Wins 100m Gold In Front Of...
Since assuming the role of Chancellor of Germany in 1933, Adolf Hitler had earmarked the 1936 Summer [ ... ]
athletics
One Year To Tokyo 2020: Five New Sports Set To Make An Appearance...
We’re just one year away from the opening ceremony of the 2020 Olympic Games in Tokyo and with [ ... ]
athletics
Justin Gallegos Creates History After Becoming The First Ever...
A runner known as Justin “Magic” Gallegos has made history after he was unveiled as the [ ... ]
athletics
Woman Drives Car Through Plymouth Half Marathon
The scene was set, a glorious Sunday on the Devon coastline, Plymouth bathed in sunshine as thousands [ ... ]
athletics
Five English Athletes Gunning For Commonwealth Games Glory
April will see the elite of English Track and Field descent descend upon Australia for the XXI Commonwealth [ ... ]
athletics
Roger Bannister’s Legacy In Anti-doping Should Not Be Forgotten
On Sunday British sport lost one of its icons. Roger Bannister, the first man to break the four-minute [ ... ]
This website uses cookies
Cookies help us and our partners provide statistics. By browsing this website, you consent to the use of cookies in accordance with our Privacy Policy and Cookies Policy.
Accept & Close