The second leg of the first set was a preview of what was to come, as Cross checked out on 147. The 180s flowed throughout the set, and a decider was needed which the Pembury man took via an 80 checkout. The second set saw maximums from both players, a lovely third-leg finish with a pair of double 18s from Cross and a 108 checkout from the latter to go two sets to the good.

Gurney pulled one back in the third set, taking it 3-2 after taking out 85 to finish. ‘SuperChin’ sat on the verge of levelling the match when Cross pulled out a stunning 130. The momentum was with him now and he rattled off three straight legs to take the set. Gurney would not take this lying down though, and powered through the fifth set with a 102 average to go back within one.

Cross had several match darts in the sixth, and Gurney pinned double 4 to go level for the first time since the match began. Rob Cross did what champions do in the decider, and peaked at just the right time to take the play away from the brilliant Northern Irishman. A 116 finish was just the appetiser for the monster 170 checkout with which he won the match. It was a game of high drama, providing a wonderful consolation to the crowd after Michael van Gerwen’s COVID withdrawal. 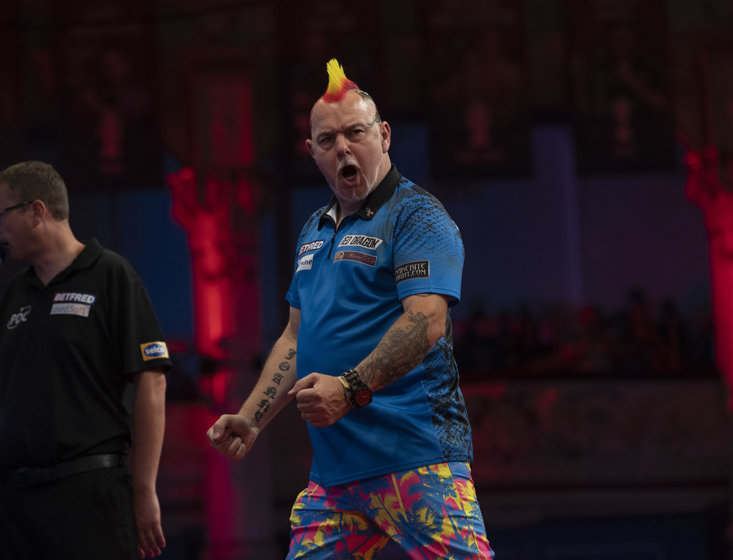 2020 World Champion Peter Wright battled back from two sets down to beat Damon Heta in a dramatic headliner. A change of darts appeared to prove key for ‘Snakebite’, who won four sets on the bounce to extinguish ‘The Heat’.

Heta averaged 94 in the opening set, a 3-1 win for the Australian. The second would require a decider, but Heta showed confidence in knocking down 84 to take it to 2-0. It was at this point that ‘Snakebite’ made the switch of darts, and it paid immediate dividends. A huge 161 checkout got Wright his first set on the board, and he pulled out a 115 on the way to winning the second.

The 51-year-old was in his stride now, and when Peter Wright is in this sort of mood very few players can live with him. The Scotsman won the fourth set 3-1 to draw level, and from there he looked unstoppable. He won the fifth and notched a very tidy 86 checkout in the first leg of the sixth. Wright finished the match with an average of 102.5 and three ton-plus finishes in a remarkable comeback.