Football
News
This evening could be pivotal for Kepa if he learns from the man in the opposite goal
Elliott Bretland
15:03, 17 Feb 2020

David de Gea will know exactly how Kepa Arrizabalaga is feeling. The Manchester United goalkeeper lost the Spain number one shirt to the Chelsea stopper last year and was forced to watch on from the bench.

On Monday evening, there’s a strong chance the roles will be reversed. When the Red Devils visit the Blues at Stamford Bridge in the Premier League, it is expected De Gea will be on the pitch while Kepa will be named as a substitute.

Frank Lampard made a hugely brave call and elected to drop the 25-year-old after a run of horrendous form. Kepa has a save percentage record of just 55.6 per cent this season, conceding 32 goals in 2160 minutes of football. Still so young in goalkeeper terms, he arrived in west London from Athletic Bilbao as the world’s most expensive goalkeeper in August 2018 when Chelsea elected to pay £71m for his services. That’s huge pressure but he appeared to deal with it well during his maiden season under Maurizio Sarri.

There was a sign of petulance and naivety during the Carabao Cup final defeat by Man City when he refused to come off when instructed to by his manager. Of course, as opinion swelled against him in that moment and his performance was scrutinised, he failed to stop his side losing in the penalty shootout. However, other than that misdemeanour, it looked a sound investment. 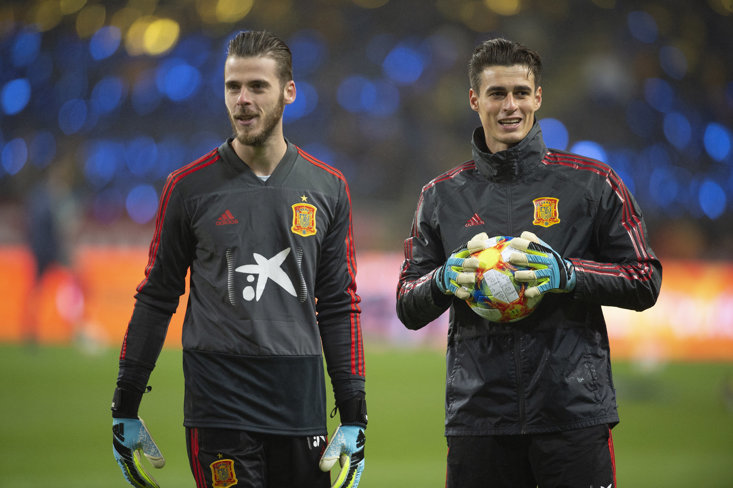 This season has been more testing though and he’s been forced to make way for the experienced Willy Caballero.

“It was just a selection on that day, but I want everyone's reaction to be spot on and he came out of the team. I know how that feels and what it would have meant to him,” Lampard explained to the press after his side’s 2-2 draw at Leicester. “Every player [gets dropped], except maybe [Lionel] Messi or [Cristiano] Ronaldo.

"I don't expect smiley faces when people get dropped, I just expect reactions. With the competition in squads, now you have to always be aware that if your standards drop or if the manager chooses for whatever reason, [to leave you out] you need to handle it in the right way."

How he reacts will be vital. And De Gea will be able to give him plenty of advice on how to bounce back. The 29-year-old arrived in Manchester in 2011 and received plenty of criticism during his formative years.

Following a shaky start at Old Trafford, he told AS: "When you do things wrong, even though it's [just] couple of mistakes, the press has every right to criticise you. Especially when you're a goalkeeper, who is always under the spotlight. What happened is something normal and no big deal. Now it's in my hands to change those early negative criticisms into praise."

Soon, he became United’s match-winner pulling off stunning saves, showing off incredible levels of concentration and gaining massive points. More recently, during the last few barren, tumultuous seasons, De Gea has been the club’s one shining light but also an inconsistent, flitting between Mr Dependable to not so sure.

Even if he doesn’t feature, this evening could be pivotal for Kepa if he learns from the man in the opposite goal.