Norwich City kept their slim survival hopes alive with an impressive 2-0 win over fellow strugglers Burnley at Carrow Road. The Canaries looked dead and buried but are now just seven points behind Everton, who lie outside the relegation zone. Meanwhile Burnley, who enjoyed such a high in midweek with that win over the Toffees, have been brought back to earth with a bang.

Sean Dyche’s side were second best throughout and on this showing, it is remarkable that Norwich were adrift at the bottom. Burnley, known for their organisation, were torn apart time and time again by the movement of Teemu Pukki, who scored the second goal and Milot Rashica.

From the first minute, Dean Smith’s Norwich had a spark as the home side pushed Burnley back with a flurry of chances. Rashica had his low shot tipped wide by Nick Pope, but the England man could do nothing to prevent the opener.

Burnley failed to clear a corner and Pierre Lees-Melou met the ball on the edge of the box. His shot was driven and took a slight deflection off Josh Brownhill before going in off the post past a despairing Pope. For all of Norwich’s struggles this team, they played this opening period as if they were a side with nothing to lose.

Burnley’s midweek win over Everton was seen as season-defining, but at Carrow Road it was the Canaries who took flight. Pukki’s low effort from inside the area was pushed wide by Pope’s foot and Carrow Road, although with empty seats clearly visible due to the relegation apathy the fans now feel, was right behind their side.

Maxwel Cornet’s left-footed drive on 25 minutes was the first sign that Sean Dyche’s side were getting back into the game, and they were on the front foot for the remainder of the half. It seems Carrow Road is a nervous place to watch football, almost waiting for the inevitable.

Ashley Westwood’s volley on the edge of the area was blocked, before Norwich got another body in front of a Wout Weghorst effort. Then, Matt Lowton fired in an effort destined for the bottom corner that was diverted wide by Ben Gibson.

The hosts made it in at the break with the scores level, and this spelt trouble for Burnley. They’d never come back to win a Premier League away game when trailing at half-time, and had lost 55 of those 64, and they would be handed another defeat here. 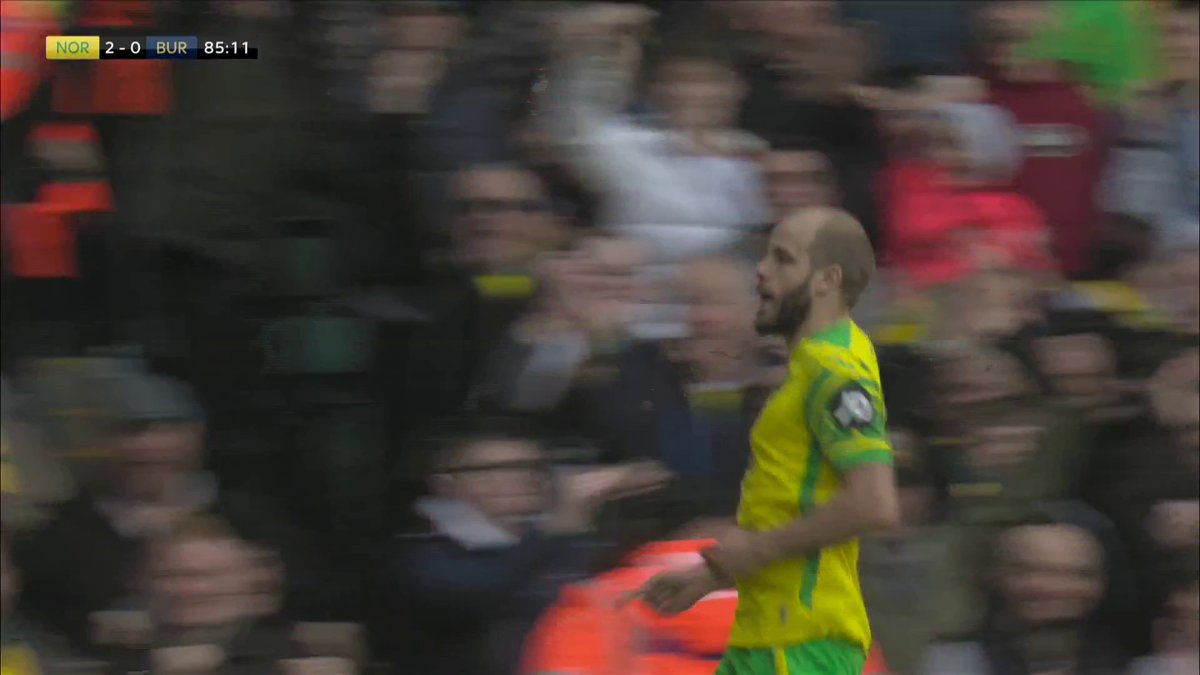 Pukki had an effort on goal blocked when in a promising position before Weghorst was taken off for Matej Vydra as Burnley tried a more cultured approach, but Norwich were still on top, with five shots to the visitor’s one in the 15 minutes after the break.

Dwight McNeil’s introduction livened Burnley up and they should have equalised moments after he came on. He whipped in a wonderful ball along the floor to Cornet at the back post who somehow, from two yards out, put his effort wide. It was arguably the miss of the season and it came at such a crucial time.

Pukki was brought down just outside the box and the ball was pulled back to him on the edge for a shot, which he mis-hit, and Grant Hanley turned onto the bar. Initially he seemed offside but he was being played on by Cornet, who was slow getting out and the Scot should have taken this glorious opportunity.

Then Rashica broke at pace from a Burnley set piece, cut inside and saw Pope claw out his powerful effort. Norwich were still pushing for a second into the last ten minutes and deservedly got it late on. Normann fizzed a low pass into the box and Pukki expertly controlled the ball to give him space in the box, and found the finish into the bottom corner.

There was still time for Vydra to hit the bar from a tight angle, but this was Norwich’s afternoon. They are still unlikely to stay up, but this has kept that faint hope alive, while seriously damaging one of their relegation rivals.