Football
News
The two-time European Cup winners can carve out a new era in the Premier League
Joey Mills
12:25, 30 May 2022

After 23 years outside the Premier League, Nottingham Forest will return to the top tier of English football for the 2022-23 season. Steve Cooper’s side beat Huddersfield Town 1-0 at Wembley Stadium in the Championship Play-Off final in a game where the losers will feel hard done by, after a couple of penalty decisions went against them. But for Forest, jubilation is the word of the day. The Tricky Trees are one of the grand old clubs of English football, but now is the time to make some new memories at the sharp end of the pyramid.

If you have tuned into any Nottingham Forest game during their near quarter-century of top flight exile, there will be certain tropes you have grown accustomed to. You will likely have heard the name Brian Clough mentioned with frequency. After all, the man who wouldn’t call himself “the best manager in the business” but was “in the top one” led the East Midlands club to their greatest successes. The other talking point you have likely heard is the small matter of Forest’s two European Cups. Their triumphs in 1979 and 1980 put them level with Juventus, Chelsea and Benfica in terms of success in the continent’s premiere cup competition.

Nottingham Forest have a tremendous history, but history is the operative word. They have not lifted a major trophy since the days of Clough. Not played European football since the 1995-96 UEFA Cup. Not played a Premier League game since 1999. It has been over two decades of turmoil for Forest, taking in a three-year stint in League One and back-to-back Play-Off semi-final defeats. As recently as the 2020-21 season they finished 17th in the Championship. Forest have an incredible history, and it is brought up so often because they have had little to smile about since.

But that has all changed after a tremendous season that has ended in an emotional promotion. Even this term looked bleak at the outset, with Forest rock bottom after eight games. Out went manager Chris Hughton, in came former Swansea City and England age group teams boss Steve Cooper. The 42-year-old proved transformative, taking a club facing an uphill climb to even stay in the Championship all the way to the promised land. 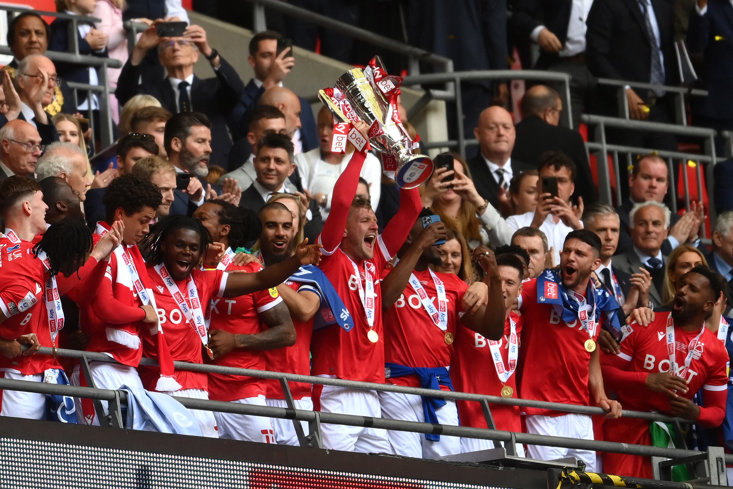 Immensely popular with fans and his players, including captain Joe Worrall. During an engaging post-match interview, where the defender amusingly let slip that Forest had been “sh*te” before Cooper’s arrival, he hailed his manager’s influence, saying “He’s come in and he’s given us that hope, given us that belief and he’s just been so nice.”

Their place in the history of the game is indelible, and the league title, four League Cups and two European Cups under Clough will live on forever. But now The Reds can make an imprint on the modern game as they head into the brave new world of the Premier League. The financial benefits of reaching the top tier are widely-reported, and perhaps often focused on a little too readily. The money is vital, and obviously for a lot of promoted teams it can be the difference between prosperity and ruin. But there is something far more romantic at stake, and when a storied club like Forest is promoted that comes into sharper focus.

This is the chance to shape the modern history of Nottingham Forest. To make sure the team is talked about not just for the legendary triumphs of the past, but for what they are doing in the present. With stars like 21-year-old Brennan Johnson leading the charge into the Premier League, the present and future can be bright at the City Ground. This will always be Clough’s club, but if all goes well it might just be Steve Cooper’s as well.