Novak Djokovic walked away with a seventh Wimbledon men’s singles title – and the Serbian legend also left a big impression on both junior singles champions at SW19 this year.

It is always fascinating to see if those winning the grand slams at junior level then progress and go on first do well on the main tour - or even as has happened for a rare few, win the main tournament later in their careers.

At Wimbledon only four men players have done that, and quite a club it is – numbering Bjorn Borg, Pat Cash, Stefan Edberg and Roger Federer. And on the women’s side there have been three in Martina Hingis, Amelie Mauresmo and most recently Ash Barty.

This year the boys’ title was won by Croatia’s No3 seed Mili Poljicak, a 17-year-old from Split, while girls title was won by the No1 seed Liv Hovde of the USA. And both had inspiring encounters with the 21-time grand slam singles champion before his latest triumph. Poljicak even practised with the tennis icon before his junior final, and Hovde was warmly congratulated by him after she lifted the trophy on Saturday.

Poljicak beat American Michael Zheng 7-6, 7-6 – which provided some revenge after his opponent had knocked him out on the clay at Roland Garros earlier in the year.

Poljicak said: “It sounds great being Wimbledon champion, and it's a great feeling that everybody's dreaming of when you're starting to play tennis - to win a grand slam even in juniors. So it's a big achievement for me. It’s the moment that you work years for.

“And also I was able to practice with Novak, one of the best of all time, to warm up before my final, and to warm him up for his final! It was a great feeling, a great memory. It helped me in one way because when you play against one of the best times, then you step on the court against junior guy, you feel more comfortable. So I think it helped me a lot, and I'm very thankful for that.

“The advice he gave was just to be calm, to be concentrate, to play every point, and that he believes I will win. We have Balkan mentality that we are like under the same. 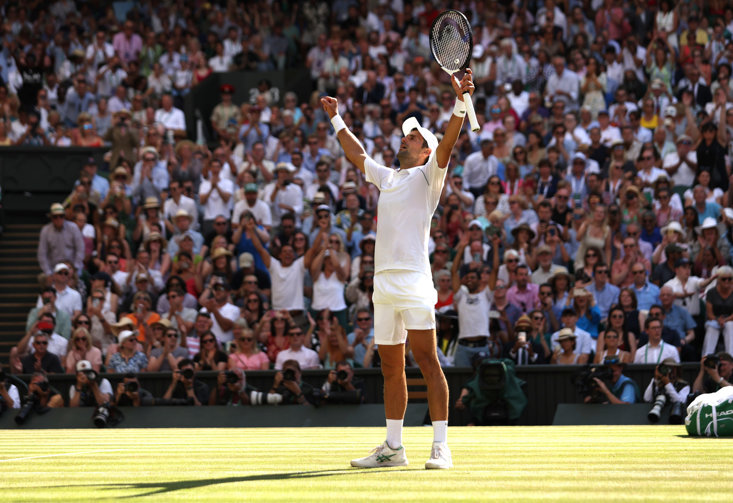 “I am the first Croatian to win a junior singles title here and I'm proud of myself because there were a lot of big names in Croatian tennis throughout the years. I'm so happy to be the first one. But I don’t think I will stay as the only one - some other Croatian guys will come and do what I did.

“I know Marin Cilic, who got to the final here. We just say hi to each other and he wishes me luck. And with Goran Ivanisevic, I mean, he's one of the greatest, maybe the greatest tennis player of all the time from Croatia. So it’s motivation to work more, to come in the pros and maybe try to get a title in the pros so he won't be the only one who won the title here. My dreams are to win a grand slam, and be No1 in the world.”

The 16-year-old Hovde – only the second American to win the girls singles at Wimbledon in 30 years - shouldered the burden of being the No1 seed with some ease, and took the title with a 6-3, 6-4 victory over Hungary’s Luca Udvardy.

She said: “It feels amazing to be Wimbledon champion. I had, like, a conversation with Novak Djokovic after the match. He was really nice. He asked me how I felt. He's a really nice guy, so it was really cool. He congratulated me, and we took a photo together, so that was really cool.

“There were a lot of people on Court No1, so it was very nerve-wracking at the beginning, but then I just focused on myself, and it got better throughout the match.

“Grass suits my game, I like how fast it is – and it's really cool to win a junior grand slam, and have it be Wimbledon because it's a great tournament overall. I think it's a great step, but I still have a little bit to go to get to the pros, and that big stage. I haven’t turned pro, and just have to see where things go now.”