Tennis fans around the world are privileged in the current era to witness the most beautiful race for the record men’s Grand Slam haul, between a peerless triptych of players we will be fortunate to experience ever again.

Ahead of the 2019 Wimbledon Final due to take place on Sunday 14 July, the tally has been oft-repeated.

Rafael Nadal currently stands at 18, built up mostly - but importantly, not entirely - from an eye-wateringly monumental domination at the French Open.

Novak Djokovic meanwhile is three behind, and five Gram Slam singles titles away from Roger Federer’s record haul of 20. All three players have achieved the Career Grand Slam.

While it was needed 75 years (having excluded the interruption caused by the Second World War) for five players to manage the feat, Nadal, Federer, and Djokovic managed to do so in 12.

This is an unprecedented period of tennis we should be still in awe of to be treated to, even with all three on the wrong side of 30.

Federer, even approaching his 38th birthday is a machine, though one that needs oiling more regularly.

A potent once-in-a generation blend of grace, composure, power, and ruthlessness the Swiss is undoubtedly the greatest and most elegant player in the sport’s history.

But age is on Djokovic’s side. Five-and-half years younger than Federer, that record should be firmly in his sights.

Since his first major at the 2008 Australian Open, an event which ended Federer’s record of 10 straight finals, with victory over Jo-Wilfried Tsonga, Djokovic has collected 14 more. This includes a tally of seven at Melbourne Park. The Happy Slam is a favourite; Djokovic holds the record for most titles won at the tournament, having overtaken Federer at the most recent championship at 2019. 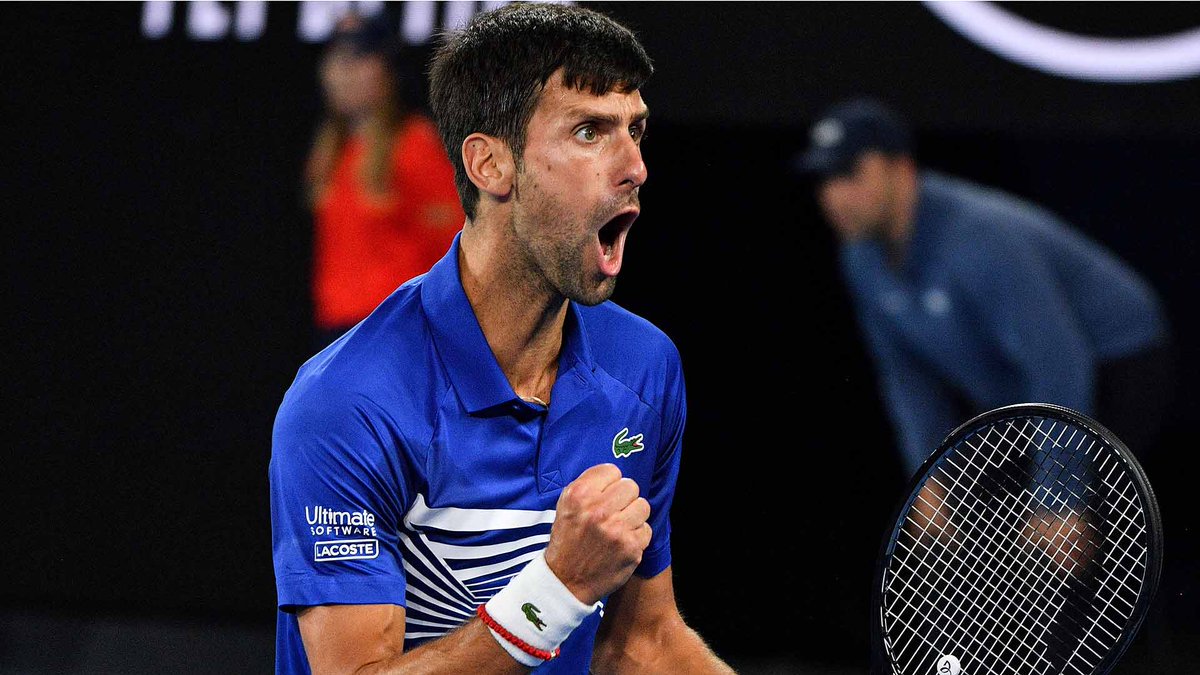 The superb Serbian has a real opportunity to become the most successful player of all time, and therefore have a legitimate claim to be the best the men’s sport has ever seen, and he can take a step further to do so with victory at the world’s oldest and most prestigious tennis tournament.

If Djokovic succeeds in the final, and retains his title following his 2018 championship, it will be his fifth victory at the All England Club. This will put him on par with Bjorn Borg. Go to Flushing Meadows and win there, then it will be the most successful decade for any individual men’s tennis player in the history of the sport.

There are a few prerequisites to Djokovic’s ultimate success.

The French Open, with the Clay King Nadal’s dominance, is understandably a sticking point for Djokovic, as it has been for Federer. The Spaniard’s monopoly at Roland Garros has only been broken three times since 2005.

It must have been pretty irksome that in a year when Nadal has beset by problems upon his return to the court following appendix surgery, that Djokovic had to suffer defeat to Stan Wawrinka that ultimately cost him the chance to join just two other players - Don Budge and Rod Laver - in completing the Grand Slam in the same calendar year. Fortunately he made up for it on the clay court the year after upon his fourth time of asking in the final.

Nadal, Djokovic and Federer have made a mockery of the average retirement age for a men’s tennis player. That stands at 27.

However, if for argument’s sake imagine Federer was to retire at the end of the season, following the conclusion of the US Open in September. Say, Djokovic goes on to have the longevity of Federer; this would provide Djokovic with the opportunity to bypass the record from a further 20 tournaments. Even if we were to expect Nadal to extend his proficiency at the French Open, Djokovic would need six from 16 Grand Slam championships.

The World Number One has played 20 sets at Wimbledon and won 18 of them. That once thought unsurpassable record that Federer holds is beginning to look just that little bit closer. 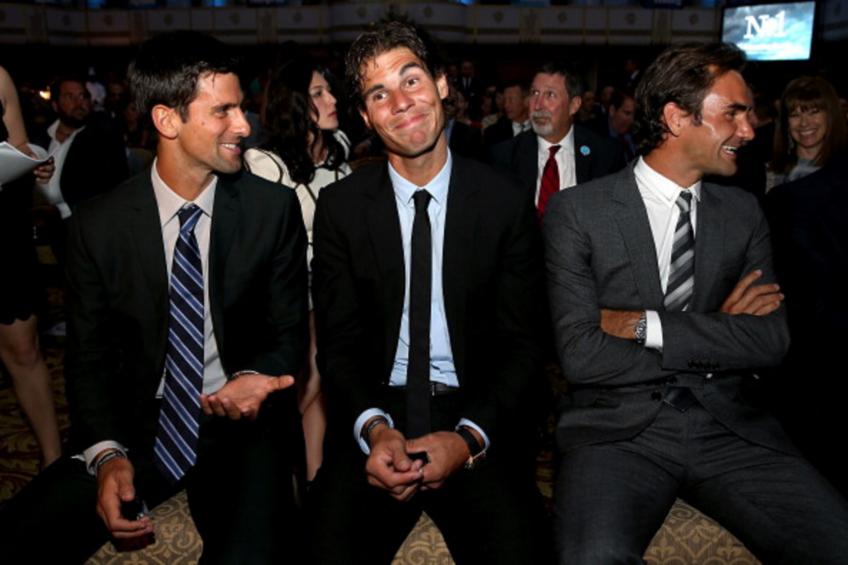 68
288
x
Suggested Searches:
Tyson Fury
Manchester United
Marcus Rashford
Lewis Hamilton
F1
Air Jordan
More
tennis
Netflix Doc 'Settling The Score' Shines Light On One Of Sport's...
Sporting injustices have tarnished the game throughout history, but the injustices that go under the [ ... ]
tennis
Long Live The King Of Clay! Nadal's Fifteen Year Love Affair...
A million seconds is eleven and a half days, yet a billion seconds is 31 years and seven months.  [ ... ]
tennis
Djokovic's Disqualification Disaster And Other Tennis Stars...
The look of horror hit Novak Djokovic almost as quickly as the tennis ball that rifled into the throat [ ... ]
tennis
Arthur Ashe, The History-Making Trailblazer Who Transcended...
Arthur Ashe is the only black man to win the singles title at each of Wimbledon, the US Open, and the [ ... ]
tennis
40 Years On From Borg, McEnroe And The Greatest Wimbledon Match...
In a match that is widely regarded as arguably the greatest-ever to be played at Wimbledon, Bjorn Borg [ ... ]
tennis
The Tennis Podcast Is All You Need To Get Through The Wimbledon...
Having planned, once again, to broadcast everyday through this year’s Grand Slam tournaments, [ ... ]
tennis
Andy Murray Can Still Compete But Has Nothing Left To Prove,...
Andy Murray knows a thing or two about creating history. The man who became Great Britain’s [ ... ]
tennis
Andy Murray Looking At Miami Open Return After Extended Injury...
Andy Murray is targeting a return to the court at the Miami Open later this month ending his extended [ ... ]
tennis
Maria Sharapova Deserves Respect For Taking Female Earnings...
Maria Sharapova has called time on her glistening career having won every single Grand Slam event and [ ... ]
tennis
Why The Next Month Is Vital For Andy Murray And His Wimbledon...
Sir Andy Murray’s hopes of competing at Wimbledon this year and defending his Olympic title in [ ... ]
tennis
An Open Victory Would Be Huge For Ash Barty, But Even Bigger...
Ashleigh Barty has reached the semi-finals of the Australian Open for the first time in her career following [ ... ]
tennis
Performance Over Outcome: Why Federer Is Still A Beast On The...
The superlative-defying Swiss is at it again. Roger Federer has muscled his way into the Australian [ ... ]
tennis
Mr Shakira And The Multi-Billion Pound Revamp Of The Davis Cup
Premier international tennis tournament the Davis Cup, fast approaching the 120th anniversary of its [ ... ]
tennis
The Young German Ready To Shatter Djok, Federer & Nadal's Ironclad...
Rafael Nadal’s hopes of finishing the season as world number one took a serious blow with a straight-sets [ ... ]
tennis
Here's Why Murray, Djokovic And Tennis's Stars Have Been Confusing...
Andy Murray, Novak Djokovic and the rest of the tennis world have been confusing reporters and fans [ ... ]
tennis
Serena Williams And The Numbers That Have Taken Her To The Verge...
With a straight sets victory over Elina Svitolina, Serena Williams once again stoked fans’ hopes [ ... ]
tennis
Daniil Medvedev: The Moscow Menace Infuriating At The US Open
“Every search for a hero must begin with something every hero needs: a villain.” That quote [ ... ]
tennis
Coco Gauff, Naomi Osaka And Taylor Townsend: Next Generation...
Taylor Towsend stole the headlines at the US Open as the 23-year-old rank outsider knocked out fourth [ ... ]
tennis
Serena Williams v Maria Sharapova: The Rivalry That Tennis Has...
Yesterday’s build-up to the US Open was full of the cliched lines we have heard on repeat for [ ... ]
tennis
Deaf Tennis Player Lee Duck-hee Etches His Name Into The History...
Tennis star Lee Duck-hee cemented his name in the history books at the Winston-Salem Open by becoming [ ... ]
tennis
Can 2019 Be The Year Of Rafael Nadal?
Rafael Nadal is playing some excellent tennis this year and has bounced back in spectacular fashion [ ... ]
tennis
Is Roger Federer Truly The Greatest Of All Time?
Roger Federer will take to the hallowed turf once again this afternoon to take on old foe Rafael Nadal [ ... ]
tennis
Cori Gauff Must Fulfil Her Huge Potential To Avoid Joining These...
Being a child superstar can be tough. Macaulay Culkin, Britney Spears and more recently Millie Bobby [ ... ]
tennis
Talking Balls: Slazenger’s Long And Illustrious Association...
The name Wimbledon will always conjure-up images of strawberries and cream, champagne, Henman Hill, [ ... ]
tennis
1997 Was The Year Of Martina Hingis: The Greatest Tennis Prodigy...
1997 was an eventful year in the world of sport. Tiger Woods rocketed into wider consciousness after [ ... ]
tennis
On This Day In 2011: Novak Djokovic Wins Wimbledon For The First...
Tennis feels like it's reaching the end of an era as the early days of Wimbledon race by. A golden [ ... ]
tennis
How The Simple Tennis Serve Transformed Into The Most Important...
Wimbledon - the best and most historic tennis tournament in the world got underway today. With two weeks [ ... ]
tennis
Virginia Wade: The Forgotten Champion Who Remains The Last British...
In 2013, Andy Murray ended a staggering 77-year wait for a British men’s champion at Wimbledon. [ ... ]
tennis
Wimbledon 2019: Who Holds The Records At The World’s Oldest...
The 2019 Wimbledon Championships are finally here and it looks set to be one of the most open tournaments [ ... ]
tennis
15-Year-Old Cori Gauff Makes History By Qualifying For Wimbledon...
Aged only 15, Cori Gauff has reached the main draw at Wimbledon for the very first time, and in doing [ ... ]