It’s the underdogs against the upperclass in Sunday’s NRL Grand Final, with the unfashionable Canberra Raiders going up against the defending champion Sydney Roosters. Rarely has there been a bigger contrast between two teams in the decider.

Canberra have not been in a Grand final since 1994, when they beat the Canterbury Bulldogs. Their golden era was nearly three decades ago. Twenty-five years is a long wait for another title.

On the other side of the fence, the Roosters are perennial challengers. They won the Grand Final last year, beating Melbourne Storm, and also won a title in 2013. In the pasts seven years they have been Minor Premiers an amazing four times. They are the big-city Sydney club with a 111-year history and money to burn.

They needed a halfback to replace New South Wales’ Origin playmaker Mitchell Pearce at the end of 2017. What did they do? They went out and signed Melbourne’s Kangaroo and Maroon great Cooper Cronk. Talk about a replacement!

They needed a fullback to replace Michael Gordon at the end of 2017. What did they do? They went out and recruited Wests Tigers star James Tedesco, who is now a star for NSW and is regarded by many as the best player in the world. Talk about an upgrade!

The Roosters are filled with Origin and Test talent – Latrell Mitchell, Joseph Manu, Daniel Tupou, Boyd Cordner, Angus Crichton, Isaac Lui, Brett Morris, Sio Siua Taukeiaho, Jared Waerea-Hargreaves. Their roster is so good that England international Ryan Hall, who has scored 36 tries in 38 appearances for his country and won numerous titles in Super League with Leeds Rhinos, can’t even get a game.

And the Chooks coach, Trent Robinson, is one of the best in the sport. Intelligent, forward-thinking and a protégé of Brian Smith, the French-speaking 42-year-old is one of a kind.

Contrast that with the ‘Green Machine’ from Canberra. Founded in 1981, the Raiders have always been the battlers from the nation’s capital. They had a tremendous amount of success from 1987 to 1994, when they made four Grand Finals and won three of them, and were led by Mal Meninga, Ricky Stuart and Laurie Daley, but it has been slim pickings since. In the past 20 years they have barely made the finals. 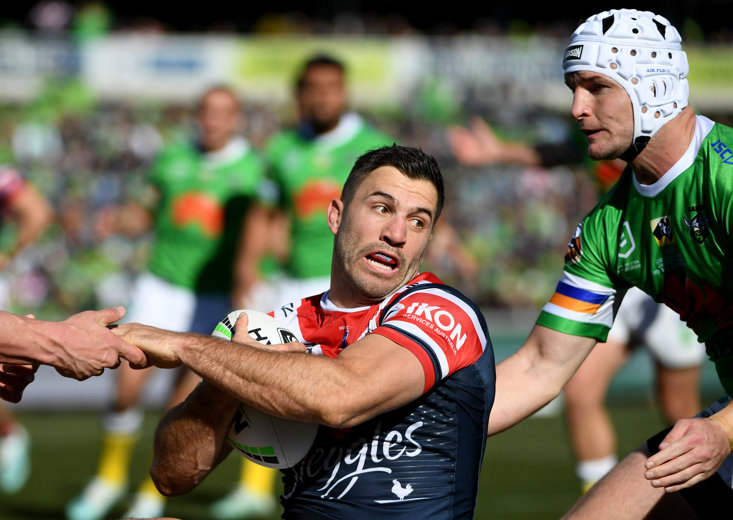 Canberra have been so unfashionable compared with the Bondi boys that they have struggled to attract good players to join the club. Tedesco actually agreed to join the Raiders in 2014, before backflipping and changing his mind. Other players, like Josh Mansour and Kevin Proctor, did the same. No one wanted to come to the ACT.

So Canberra looked to England to recruit and uncovered some rough diamonds. Yorkshiremen Josh Hodgson and Elliot Whitehead were enticed down under and made a huge impact. Fellow Brits John Bateman and Ryan Sutton followed suit this year.

BJ Leilua and Joe Tapine were brought from the Newcastle Knights, while Charnze Nicoll-Klokstad was picked up from New Zealand. They have been paired with local products Jarrod Croker and Jack Wighton with devastating affect.

Bringing it all together has been Raiders great Stuart. No one knows the unfashionable club, the culture of the Green Machine or the history of the area better than the Queanbeyan lad. After coaching the Roosters, Cronulla and Parramatta in Sydney, the passionate and fiery Stuart returned home in 2014 and has got his side all the way to the promised land.

Whoever wins on Sunday, history will be made. No side has won back-to-back premierships since the Broncos in 1993. The Roosters can carve their name in the history books.

By the same token, the Raiders can ensure their journey has a fairytale ending. This ragtag bunch of grafters and fighters can prove anything on the sporting field is possible.