New York City FC's exquisitely talented creative midfielder, Maximiliano Moralez, kicked off the new MLS season in fine style by putting in a shift full of upside that was punctuated with him scoring a superbly taken goal.

From his attacking geared midfield post, the diminutive Argentine was smartly afforded plenty of freedom to apply his qualities to good use by manager, Patrick Vieira, using this licence to create advantageous scenarios for NYCFC to progress their attacks.

By cleverly varying his positioning, the former Serie A maestro, who spent over four-and-a-half years with Atalanta spanning 2011-2015, excelled at evading his markers to find space in order to weave his magic. To start with, he'd often choose to drop deep into the right half space to inherit possession. In such instances, he not only ensured a numerical superiority for his team's build up, but also was able to free up right-back, Anton Tinnerholm, as Kansas' Johnny Russell would get drawn to Moralez and consequently leave the Swede open. Also noteworthy wad gifted new signing Jesus Medina's infield positioning that gave Tinnerholm additional space to motor into upon receiving. 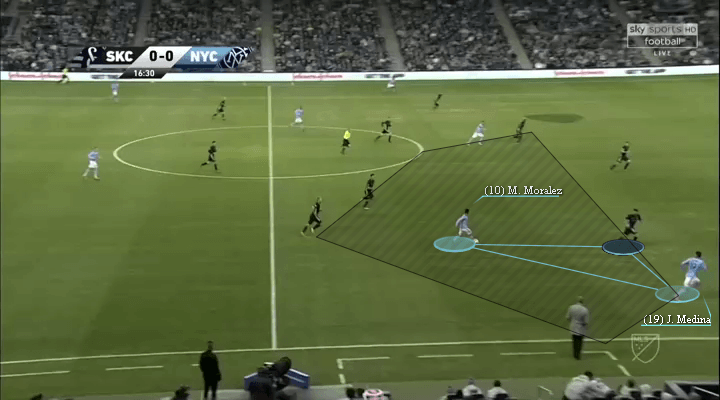 His capacity to persistently find vacant space in between Kansas' midfield and defensive lines was another essential elements towards his success, where he escaped his marker's attention, usually Roger Espinoza, to receive unimpeded and charge at his opponents' now compromised backline. Ideal 2v1 situations could then occur, with Medina and him able to overload Kansas left-back, Cristian Lobato. 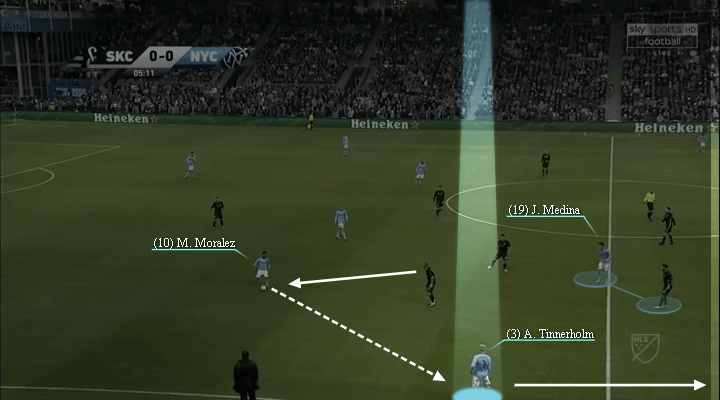 Other avenues through which he caused headaches for the home side came via his superbly timed blindside runs into the box, one of these allowed him to score his instinctive goal, his well performed rotations with Medina and his crafty dovetailing work with David Villa when he pushed up to get within close proximity of the Spanish star.

Once in possession, the technically proficient trequartista's immaculate ball control, low centre of gravity and amazing awareness ensured he could comfortably handle pressure by wriggling away from trouble with a ingenuitive dribble or by pinpointing a colleague with a slick pass. Moreover, when carrying the ball at his feet, the way he waited until he provoked a pressing action just before releasing the ball posed as another key component in manipulating Kansas' stopping structure to generate a free man upfield.

Now in his second season with the Blues, Moralez yet again demonstrated what an integral piece of Vieira's exciting NYCFC puzzle he unquestionably is. Adding enormous class, skill, experience and that rare ability to turn a game on its head in an instant, it's little wonder why the compact, 161cm playmaker is one of the most important components of this ambitious outfit.