The Rocket lost a rollercoaster Betfred World Championship thriller 13-12 at the Crucible Theatre at the hands of the Glasgow Gladiator.

Defending champion O’Sullivan had been hoping to equal legend Hendry’s haul of seven Sheffield successes set in 1999, having already claimed most of his other records, but world No16 McGill became the first man into the quarter-finals with a brilliant display that on several occasions left O’Sullivan tapping the table in appreciation.

McGill, 30, could easily have faced O’Sullivan in last year’s final, but suffered the agony of losing a semi-final 17-16 to a fluked green in the decider against Kyren Wilson. However this victory exorcised some of those demons for world No16 McGill, who hones his skills in a practice unit in his home city sparring with John Higgins and Stephen Maguire.

O’Sullivan has not lifted a trophy since winning his sixth world title at the Crucible last August, having lost all five ranking finals this season and now at 45 this is a major setback to his chances of equalling or even beating Hendry’s most cherished record – and one he admits he would be “gutted” to lose.

McGill can start dreaming of going one better than last year, and will take on either former world champion Stuart Bingham or Jamie Jones for a place in the semi-finals.

O’Sullivan said, “The match Anthony lost in the semi-final last year was unlucky, and you couldn’t begrudge him a world title this year after that.

“Maybe the snooker gods levelled things up for him a bit this year. You could say this is one that got away, but there have been six that didn’t get away.

“I have got virtually every record apart from this one of winning the world title seven times. It is frustrating, I’ll have to move on and it wasn’t meant to be.” 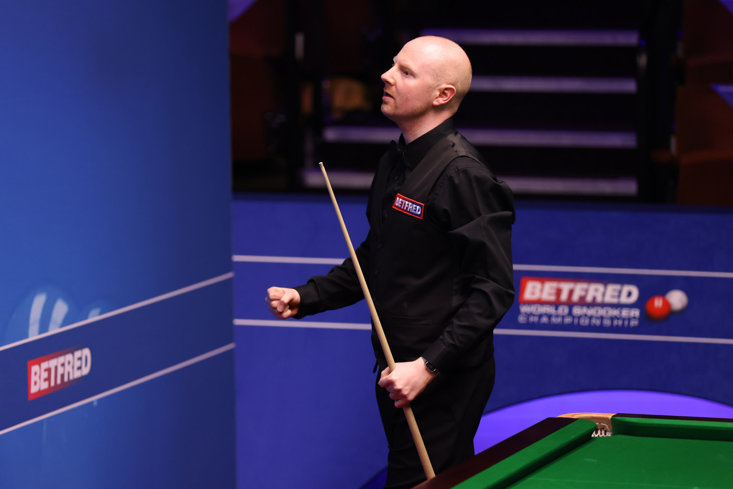 McGill has never even watched a video nasty of last year’s horrible semi-final defeat that cost him a cool £100,000, but after a first win over O’Sullivan on the biggest stage he will want to watch this match again and again.

McGill said, “I played so well this morning, and then Ronnie was brilliant tonight, I couldn’t quite step up until winning the frame somehow to go 11-11.

“To finish with 136 and 85 was great, Ronnie left me two easy starters but I held myself together really well. The six times I lost to Ronnie were earlier in my career, I am a better player now.

“And I don’t want to win this match and lose the next one.”

O’Sullivan surprised everyone yesterday morning starting with the much criticised and controversial Mark Williams-style break-off into the back of the pack of reds, but McGill managed to sink a loose one at his first attempt, suggesting there is work to do on that tactic.

O’Sullivan, playing with a patched-up cue having had three lots of emergency repairs, continued with the practice but it did him little good. McGill took his winning streak in frames to seven-in-a-row by surging 8-4 ahead, and only pinching the last of the morning kept the six-time winner in the hunt at four behind.

But O’Sullivan’s own run of six frames on the spin turned the match on its head and put him in front at 11-10 before McGill stopped the rot with a break of 87. McGill took it to a decider with a superb break of 136 and when O’Sullivan broke down on 42 he took advantage.

Stuart Bingham knows a bit about seeking redemption after a ban from the sport – and reckons Jamie Jones has emerged from his own suspension a better player.

Former world champion Bingham takes on Welshman Jones on Sunday for a place in the quarter-finals. In 2017 Basildon’s Bingham, 44, was banned for three months for betting on snooker matches but came back to win three titles including the Masters.

Jones was suspended for 12 months from October 2018 for failing to report an illegal approach, and as a result he dropped off tour before regaining his place just last summer.

World No18 Bingham, who also had to qualify this year and impressively beat Ding Junhui in the first round, while the 33-year-old Jones beat the seeded Stephen Maguire in the last 32.

“I have had a chat with him in Milton Keynes this season, there were some similar circumstances,” said Bingham.

“Jamie was going through some bad times when he was out and he is maybe producing better snooker now than before he got banned.

“To fall off tour, go through qualifying, and now get to the last 16 of the world championship, he has done well.

“Talking to him, what he went through, the dark times, he is showing how strong a character he is.

“We went through some of the things he went through, like his hearing. It is hard to hear and brought back some difficult memories.”

Meanwhile, Bingham is certainly doing his bit for a new snooker dress code. The former world champion is a big fan of TikTok – the video-sharing app hugely popular with teenagers. And Basildon’s Bingham has gone viral after performing a ‘Flip The Switch’ routine to Drake track ‘Nonstop’ with wife Michelle - and changing into her clothes. 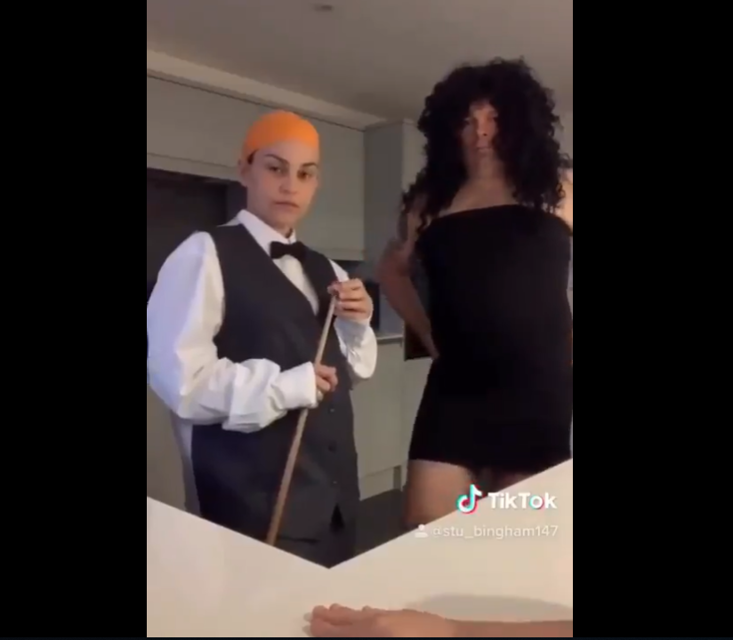 Bingham 'Flips The Switch' on TikTok with wife Michelle

World No1 Judd Trump attacked snooker bosses on the eve of the tournament for failing to move with the times on players’ attire, but there is nothing stuffy about Bingham’s hilarious film that has already got almost 150,000 views.

And even stepdaughter Tegan, son Shae and daughter Marnie Rose gave it the thumbs-up.

Bingham added, “It started off as a drunken lockdown night. We started having a few drinks, went on TikTok, having a bit of a laugh.

“I had fun with the missus and we got a bit carried away – me putting her clothes on!

“It was a bottle of red through the day and rum and coke at night. Then we went through some of the videos and we decided to do this.

“Michelle had my clothes on, with a swimming hat on, too, looking bald. I think about 144,000 people have seen it.

“It is a bit of humour, showing our characters, and let everyone have a laugh. The kids went along with it.

“But I am definitely not doing a Mark Williams type bet, and promising to wear a little black dress if I win the world title.”