And a tearful and emotional Rocket has already warned the Scot that he plans to beat it and set a new mark of eight next year.

O’Sullivan beat Judd Trump 18-13 in the final of the Betfred World Championship in Sheffield and after a bear-hug with his rival celebrated with son Ronnie jr, daughter Lily and his dad in the arena.

He said: “It means everything to me. My dad was in a cell on his wing when I won this my first time. So to have my dad here is special.

“It's hard to resist coming here and playing because you don't know how many times you can play here. It's amazing. I'm a relieved person at the moment, It's like I'm floating.

“You let the snooker gods decide what happens – and in these 17 days they were on my side. That is the greatest result I have ever had.

“Me and Stephen can share the record for a year! I have loved every tournament this season but I have had to detach myself emotionally at this event – it brings out the worst in me!

“We have the three Ronnies here tonight with my dad and my lad, and little Lily. Little Ronnie was only four when he first came here, now look at him – bigger feet than me and a good-looking boy.” 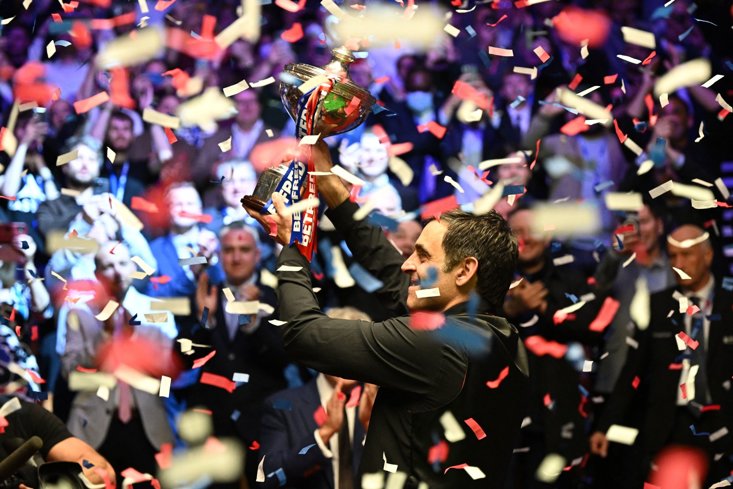 It is the fourth world title O’Sullivan has won since renowned sports psychiatrist Steve Peters transformed his career in 2011 when he was ready to quit.

O’Sullivan added: “Steve Peters has transformed my career because he taught me that no one is perfect all the time. He helped me compete.

“I had the talent but didn’t enjoy digging it out. The optimism has to be drummed into me because I fear the worst

“But Judd will be back here and win it a few times more and the other guys better get their act together.”

Trump said: “I just want to say massive congratulations to Ronnie and I think he will win at least once more – and could go on to get nine or 10.

“He has been a pleasure to share the table with, and he has been so good to me over the years, letting me practice with him when I was young, and learning things off him.

“It is an amazing achievement and he is the best player of all time. He keeps getting better and better and has such dedication and determination.

“I was just happy to make a match out of it. I was a bit drained from my semi-final on Sunday, it came back today but it was too late.

“I also think I made a mistake saying this tournament should move from here – but should stay.”

O’Sullivan is already the 4-1 favourite with the sponsors to win it again next year - and set a new record of eight world titles.

He became the oldest Crucible champion on a glory night in the Steel City. And having achieved that feat the Rocket can definitively be hailed as ‘the greatest’.

Already holding the records for most ranking titles, most majors, most century breaks and most maximum 147s, Hendry’s extra success in Sheffield was the itch the world No1 needed to scratch.

And in doing that O’Sullivan edged ahead of his former mentor and great friend Ray Reardon by winning the title at the age of 46 years and 158 days.

But the statistics do not begin to tell the story of the spell O’Sullivan has cast over snooker since he turned pro fully 30 years alongside John Higgins and Mark Williams.

He is that rare thing, both winner and entertainer - playing with a rare flair and panache that lends him a special aura and place in the sporting pantheon.

And he lit up the iconic arena yet again in more ways than one yesterday – at one point getting a lighter out and burning an offending fibre on the tip of his cue.

If his greatest world title feat came in 2013 when he stormed to the title after taking an entire year away from the game, this carried far more significance as well as a £500,000 cheque.

The Sportsman
@TheSportsman
🏆7⃣ What a moment for Ronnie O'Sullivan!
📹 @WeAreWST

He also delivered a fairy-tale ending for his documentary film crew – and the auction for all those hundreds of hours of footage could now be intense.

The Rocket has been tracked around all season to a team with unlimited access both in the arena, backstage and at home.

And in their wildest dreams those behind the project cannot have imagined this famous night that saw the world No1 bring the house down.

Until a Trump rally in the non-political sense yesterday, O’Sullivan had hardly been tested in wins over Dave Gilbert, Mark Allen, Stephen Maguire and John Higgins.

The first day of this final had been the O’Sullivan show in every sense. Heated exchanges between the Rocket and referee Olivier Marteel appeared to have disturbed Trump’s focus.

The Juddernaut got dragged into the circus on Sunday afternoon and may with hindsight think that another time he would be better off staying well out of it.

But yesterday we saw the real Trump, the one that has been overall the best player on tour over the past four seasons.

Having been a pale shadow of himself for the first two sessions, realistically Trump from 12-5 down had to win the third session yesterday afternoon 6-2 to have any chance.

And as the realisation of what he could achieve seemed to start weighing on the world No1 for the first time in the tournament, Trump did just that to close to 14-11 ahead of the evening finale.

Two century breaks and another effort of 59 kept the match alive and delivered a message to his rival that this was not going to be a mere procession to the coronation.

He continued to battle and knocked in the 109th century of the tournament this year – a new record. But Trump had just left it too late, and the king was crowned.