Cricket
News
India blew their chance to win a Test series in England for the first time since 2007
Shane MacDermott
13:17, 05 Jul 2022

Wow. What a difference a year makes!

Last summer England were on the brink of being hammered 3-1 by India, before a Covid crisis in the visitor’s camp led to them fleeing to the IPL with the fifth Test of the series postponed a year.

But with a new hierarchy and mentality, the unrecognisable hosts are the perfect summer gift which keeps on giving. In short, India blew a great chance to win a Test series in England for the first time since 2007 and it came back to bite them as the on-song Lions roared to a famous win.

The raucous Birmingham crowd were treated to the latest instalment of ‘Bazball’ as the hosts sauntered to their mammoth 378 run chase with incredible ease.

Renditions of ‘Don’t take me home….please don’t take me home’ rang out of B5 as Brendon McCullum’s hosts flayed India’s weary bowlers to all parts. And no wonder the fans didn’t want it to end after Root and Bairstow made their unbroken stand of 269 runs in just 315 balls look like a club game down the local green on a Saturday.

The manner in which England turned this Test around was phenomenal. They had no right to win the game heading into the penultimate day. We really are witnessing something special.

Ben Stokes’ side trailed by 257 runs with India having seven wickets in hand. And led by fierce captain Stokes, England bowled Jasprit Bumrah’s side out for 245 to set up a tricky chase.

But this side has no fear. No score is seemingly out of reach with their new-found philosophy and joy is a sight to watch. It’s blink and you’ll miss it cricket. And everyone in attendance has been treated to a batting masterclass, similar to watching Ronnie O’Sullivan in full flow at the Crucible edging towards his record-equalling seventh world title earlier this year.

Fittingly, former skipper Root secured the monumental victory with a reverse-swept single. Unburdened by the pain of captaincy, the smiling assassin has taken his batting to a whole new stratosphere. 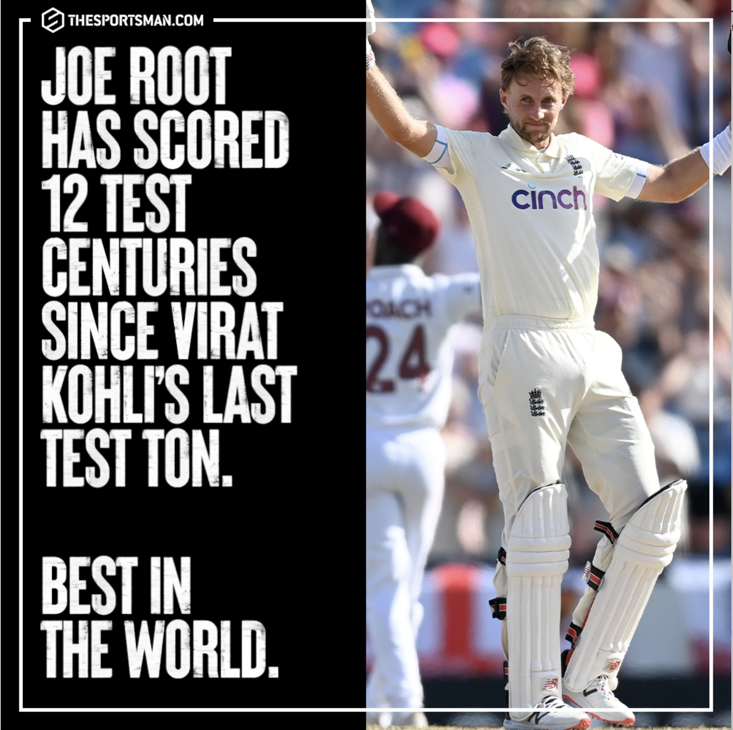 Last year he was being pummelled into the dirt by this great Indian side as the captaincy slowly slipped away. The dreadful winter, which completed a heart-breaking spell of just one Test victory in 17, was the final nail in the coffin for mentally-wiped Root.

Just two years ago, Root was falling away in the ‘Big Four’ debate of current great Test batters. Virat Kohli, Steve Smith and Kane Williamson were also scoring centuries for fun, whilst Root’s 50-100 conversion rate was under severe scrutiny.

But Root’s 12th Test ton since Kohli last reached three figures in the longest format took his incredible tally to 28, one more than his Indian counterpart and Aussie Smith — and four more than Kiwi captain Williamson.

Root beamed: “It was pretty fun doing it. Throughout the whole summer, from that first game we've said 'whatever they get, we'll chase it.' Ben [Stokes] said to us before the toss, 'we're not going to bat first, we're going to chase.' That's the mentality of how we're going about things at the minute.”

As well as England pulled victory out of the jaws of defeat here, Bairstow’s revival in the Test arena has been just as astonishing.

The summer of man-of-the-match Bairstow continued as he notched up his 12th Test ton. Amazingly it was his fourth in five innings; his other knock was a fine unbeaten 71.

If ever an alteration in team philosophy suited anyone better than the love affair between Bairstow and ‘Bazball’ then I, for one, am yet to find it.

Bairstow beamed: “It is fantastic the way we're playing and everyone is really enjoying the success and that is a huge part of it.

"If Joe and I are out there doing it together we're in a really good place. We've been doing it for a long time together now.

"It is really special to knock off 378 with just three down. It is something that we'll never forget. After day two I got asked, 'what do you think is too many?' and I said 'whatever they set we'll go for' and that's exactly what we did.”

Captain Stokes purred: "There is clarity within the team and changing room. It is the language that we speak in and the mentality that we get across. It is amazing the language that you use in a changing room and results have looked after themselves in a way. It's just how we play the game, that has been the most important thing, and five weeks ago that was the main thing.

“As people from Yorkshire say, 'strong Yorkshire, strong England'. It couldn't be more true right now. These two are just phenomenal. Rooty has been doing it for 10 years and Jonny has just honestly been ridiculous over the last five or six weeks. He has got runs but it is the way that he has done it - it's exactly what we talk about.”

England’s Test side now have six weeks off before they host South Africa in an intriguing summer showdown. And I simply cannot wait.

x
Suggested Searches:
The Sportsman
Manchester United
Liverpool
Manchester City
Premier League
More
cricket
Everything You Need To Know About The Hundred 2022
The Hundred returns tomorrow for its supposedly ‘difficult second album’. However, all [ ... ]
cricket
An ODI Icon: The Day Ben Stokes Won The World Cup For England
He arrived at the crease with England 71 for three in the 20th over. They were behind the rate and losing [ ... ]
cricket
Edgbaston To Employ Undercover Abuse Spotters For England v...
Cricket chiefs are set to employ “undercover football crowd-style spotters” at Edgbaston [ ... ]
cricket
Jos Buttler Named Captain Of England White-Ball Cricket Teams
Jos Buttler has been appointed captain of the England Men’s white-ball teams by the England & [ ... ]
cricket
Ducks, Books And Cricket Sucks: The England v India Test Series...
Cast your mind back to a time when Chris Silverwood was England coach and Joe Root was captain. When [ ... ]
cricket
England's Greatest: Eoin Morgan Will Go Down In History As A...
When Eoin Morgan retires from international cricket on Tuesday, a gap will appear in the England dressing [ ... ]
cricket
England Secure First Home Series Whitewash In Nine Years After...
Captain Ben Stokes saluted his side after England secured their first home series whitewash in nine [ ... ]
cricket
WATCH: Henry Nicholls' Bizarre Dismissal Against England
We have just witnessed one of the most incredible things ever seen in a Test cricket match! During [ ... ]
cricket
Is It Time For England To Separate Their Test Side From ODIs...
Joe Root was England’s top scorer at the last Cricket World Cup. Jonny Bairstow leathered back-to-back [ ... ]
cricket
Duck, Duck, Excuse: Captain Morgan's On Shaky Legs As England...
We have seen two sensational ODI performances from England in the Netherlands. After hitting a world [ ... ]
cricket
England Smash ODI World Record As Jos Buttler Hits 162 in 70...
England have just done something truly spectacular. Against the Netherlands, Eoin Morgan’s side [ ... ]
cricket
Brilliant Jonny Bairstow Batters New Zealand As England Take...
Jonny Bairstow smashed England’s second fastest ever Test century as Ben Stokes’ side wrapped [ ... ]
cricket
Unstoppable Jimmy Anderson Brings Up 650 Wickets With Plenty...
When a young James Anderson conceded a no-ball as his first act as a Test bowler and went on to concede [ ... ]
cricket
Why Ben Stokes' And Joe Root's Differing Personalities Suit...
As England prepare to take on New Zealand, looking to win back-to-back Tests on home soil for the first [ ... ]
cricket
Joe Root: England's Greatest Ever Batter Now Has The World's...
If there was ever any doubt about Joe Root’s class, it is simply beyond debate after his match-winning [ ... ]
cricket
Majestic Joe Root Leads England Into A New Era With New Zealand...
The new era of English cricket started with a bang as Joe Root’s masterclass hundred led England [ ... ]
cricket
The English Cricketing Summer Won't Be The Same Without Shane...
There’s a piece of the English summer missing. New Zealand wickets fell at regular intervals on [ ... ]
cricket
New Era, New Hope? England Cricket Seeking A Fresh Start After...
A new Test summer brings a new captain, new coach, new managing director and new approach to English [ ... ]
cricket
Brendon McCullum Not Afraid Of England Challenges With Ben Stokes...
Brendon McCullum strolled around Lord’s, soaking up the ‘Home of Cricket’ as [ ... ]
cricket
Stokes The Skipper: However Long It Lasts, It Should Be One...
He dragged England from the brink in the 2019 World Cup final to help record the most dramatic victory [ ... ]
cricket
Joe Root's Resignation Leaves England's Men's Test Team At An...
Now what do England do? They have failed to win any of their last nine Men’s Tests, have one victory [ ... ]
cricket
Everything You Need To Know About The Hundred 2022
The Hundred is back for its second edition and with the draft having taken place earlier this week, [ ... ]
cricket
Why The Hundred Deserves The Main Billing Ahead Of Suffering...
While England’s women flew the flag proudly for the nation during the recent World Cup, England’s [ ... ]
cricket
England Suffer Final Heartbreak As Australia Win Women's World...
England suffered heartbreak on the grandest stage as history makers Australia blasted their way to a [ ... ]
cricket
Can Underdogs England Secure Most Unlikely World Cup Win vs...
England have risen like a phoenix from The Ashes and are out for redemption in the Women’s World [ ... ]
cricket
Can Heather Knight's England Complete Staggering Turnaround...
Resurgent England have produced a remarkable turnaround to keep their Women’s World Cup title [ ... ]
cricket
Root Of The Problem: Do England Need A Change Of Captain?
It’s true: England have become the laughing stock of world cricket. So, has the time come for [ ... ]
cricket
West Indies vs England Preview: Lifeless Pitches Will Kill Test...
Sir Geoffrey Boycott had it right when he said “The future of Test cricket is at stake — [ ... ]
cricket
England Once Again Fail To Find Knockout Blow In Hard-Fought...
England captain Joe Root stressed he saw plenty of “progression” from his side after a gruelling [ ... ]
cricket
Shoots Of Recovery: England Batsmen Finally Re-Pay Under Fire...
England endured an Ashes series to forget. Hammered by arch-rivals Australia, skipper Joe Root just [ ... ]