On 18th May 2002, ‘British Bulldog’ Davey Boy Smith passed away from a heart attack at the age of just 39. No other professional wrestler has captured the imagination of UK wrestling fans like the Bulldog. His popularity helped take public perception of sports entertainment in this country from smoky halls and ill-fitting leotards to a glitzy, global spectacle.

After an early career spent in British, Japanese and Canadian rings, Smith joined the then-WWF in 1984. Teaming up with cousin Dynamite Kid as The British Bulldogs, the Lancashire-born superstar was an instant success. A series of classic matches against The Hart Foundation, comprised of Smith’s brothers-in-law Bret Hart and Jim Neidhart, helped establish the Bulldogs as firm crowd favourites.

The balance of the team was perfect. The smaller, high-flying Dynamite contrasted perfectly with the big but athletic powerhouse in Davey. It helped that the WWF was on-board with the combo, booking them to look like the stars they were. A star-turn alongside Ozzy Osbourne at WrestleMania II was a particular highlight of their early years.

This made it all the stranger when the pairing departed the company in 1988. Dynamite walked out after a dispute with management and Smith followed him out of the door in a show of solidarity. The Bulldogs returned to Japan, where they were a popular ‘gaijin’ act, meaning foreigner. The partnership disintegrated due to personal issues between the cousins, and Smith eventually struck out on his own.

WWF were extremely keen on Smith as a solo act, free from having to deal with his often-fiery cousin. Davey was repackaged as the definitive British Bulldog, and feuded with giant muscle-man The Warlord and the legendary Mr Perfect. During this period, Sky television launched in the UK. WWF wrestling was a major part of Rupert Murdoch’s initial satellite offering.

Fans weaned on the World of Sport era of British wrestling were taken aback. While the likes of Big Daddy and Kendo Nagasaki fought in dark theatres while sporting physiques like your Dad, the WWF’s superstars competed in legendary venues like Madison Square Garden and boasted chiselled, albeit chemically-enhanced, physiques. It was like night and day, and a whole country was captivated. 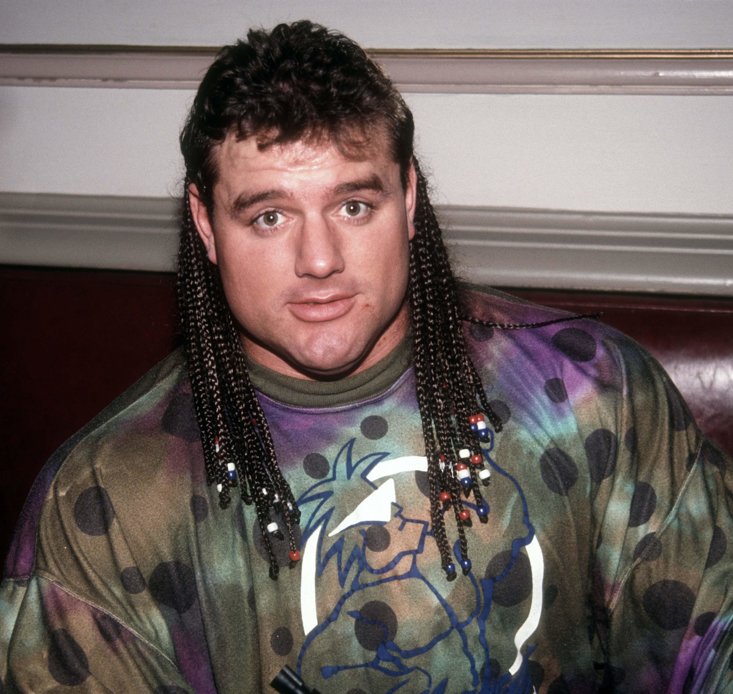 The Bulldog was the missing piece of the puzzle in the WWF’s British invasion. With a homegrown star to merchandise, the company hit untold heights in this country. A genuine cultural fad to rival the Teenage Mutant “Hero” Turtles (as they were known on our censor-happy Isle) or Gladiators, the WWF was everywhere. The iconic Hasbro action figures, sticker albums, magazines and candy littered the shelves of every Woolworths you could find. The Bulldog was front and centre on all this merchandise, as well as being a fixture of the UK talk show and children’s TV circuit. With the Premier League still a few months away from fruition, Bulldog was the UK’s premiere superstar athlete.

After the European Rampage Tour and Battle Royal At The Albert Hall were box office smashes with Bulldog in the headline slot, the WWF decided to think bigger. For the first time, a mainstream pay-per-view event would be staged outside of North America. In August of 1992, the WWF would present SummerSlam from Wembley Stadium.

Despite the card featuring a WWF Championship match between the Ultimate Warrior and ‘Macho Man’ Randy Savage, the company took the unprecedented step of closing out a show with an Intercontinental title contest. The reason was clear. Bulldog would challenge Bret ‘The Hitman’ Hart for the title in the main event of a show that would have been impossible without him.

In front of over 80,000 fans under the famous twin towers, Bulldog contested the best match of his career with Hart. The bout makes for scintillating viewing even now. An intoxicating blend of atmosphere, psychology, technique and storytelling. The battle is brought up annually when talk turns to the best matches in the history of SummerSlam, and with good reason. Wrestling’s summer spectacular may never have played host to better than this.

The bout ended in the only way it could, with Bulldog heroically triumphing and lifting the Intercontinental belt high in front of his adoring public. Nobody present at the time knew this would be as good as it got for both Bulldog and the WWF fad in the UK.

The company’s decline in popularity may or may not be directly attributable to Smith’s November 1992 firing, but it seems likely the two are connected. Bulldog was reportedly let go when it was found that he was purchasing Human Growth Hormone from a doctor in England.

Smith’s status as a huge money draw in the UK did not go unnoticed in the world of wrestling. WWF’s main rival, World Championship Wrestling (WCW) signed up the Wigan star in 1993. Capitalising on his vast fanbase, the company ran The Real Event Tour across the UK with Smith as the star. It was the company’s most profitable overseas tour in history at that point, a testament to Bulldog’s enduring appeal.

The WCW deal didn’t last, with Bulldog moving back to England at the end of 1993. He did brisk business for small domestic promotion All Star Wrestling before returning home to the WWF. His third run was not as successful as his first two, but did feature plenty of moments to savour. He renewed hostilities with Bret Hart in a classic 1995 bout, before forming a tag team with Owen Hart, brother of ‘The Hitman’. Bret would eventually join the pair to reform the Hart Foundation faction in 1997.

When Bret left the WWF for WCW in the wake of the Montreal Screwjob, Bulldog went with him. Sadly, his tenure never really got off the ground. Bulldog sustained a severe back injury after landing awkwardly on a trapdoor that had been cut into the ring to allow Ultimate Warrior to make an entrance later in the show. Smith was released from the company while recuperating, and developed a painkiller addiction as a result of the serious spinal damage he had incurred.

Bulldog’s physical prime was over, and though he did return for a brief WWF run in 1999, he physically couldn’t last. Retiring in 2000, Bulldog was training for a ring return at the time of his 2002 death. His last two matches came that same year, teaming alongside his son, Harry Smith. That son has grown up to become Davey Boy Smith Jr, a former WWE wrestler in his own right who continues his father’s amazing legacy to this day.

It is a legacy that will always endure when wrestling in Britain is discussed. This country has produced incredible wrestlers before and since. But never has there been a mainstream superstar, a main event-level box office attraction and a larger-than-life legend to rival The British Bulldog, Davey Boy Smith.

x
Suggested Searches:
The Sportsman
Manchester United
Liverpool
Manchester City
Premier League
More
us-sports
The Grap Wrap: AEW x NJPW Forbidden Door Special Including Cesaro's...
AEW kicked open the Forbidden Door this past Sunday, and a lot of newsworthy happenings fell out. There [ ... ]
us-sports
NBA Draft 2022: The Orlando Magic Select Paolo Banchero As First...
The Orlando Magic selected Paolo Banchero as the first pick in the 2022 NBA Draft on Thursday at the [ ... ]
us-sports
The Grap Wrap: Vince McMahon Embroiled In 'Hush Money' Scandal
It’s been a bumper week of wrestling news, with the more controversial side of the squared circle [ ... ]
us-sports
Phil Jackson: The Man Who Elevated Jordan And Bryant To The...
You hear Chicago Bulls, you think Michael Jordan. You hear Los Angeles Lakers, you think Kobe Bryant. [ ... ]
us-sports
The Grap Wrap: Bray Wyatt To Return? MJF's Flight Drama And...
Good morning grapple fans, and welcome to a new semi-regular professional wrestling column from The [ ... ]
us-sports
Colin Kaepernick, The NFL Star Rather Than Activist, Might Be...
Google Colin Kaepernick. There he is, the ‘American activist’. Check out Wikipedia. Oh yes, [ ... ]
us-sports
NBA Playoffs Resume After Chaotic Exits For Champion Bucks And...
It’s been a tremendous few days in the NBA and this week’s conference finals, which start [ ... ]
us-sports
Ric Flair Returns At 73: The Nature Boy Will Walk That Aisle...
“To be the man, you gotta beat the man!” ‘Nature Boy’ Ric Flair has uttered [ ... ]
us-sports
There Are Storylines Everywhere You Look In The NFL's Week 1...
Something the NFL seem to be willing to do is make their sport a spectacle through their own power. [ ... ]
us-sports
Chuck Daly: 'Daddy Rich' Tamed Rodman, Bagged Isiah His Rings...
Entering a debate on the greatest sports sides in history should inevitably reach a particular conclusion. Avoiding [ ... ]
us-sports
'We Want RK-Bro! We Want The Usos!': No One Is Safe From Sasha...
When WWE Women’s Tag Team champions Sasha Banks and Naomi first joined WWE, the landscape was [ ... ]
us-sports
Everything You Need To Know About WWE WrestleMania Backlash
The wait ends this weekend, as WWE returns with their first Premium Live Event since WrestleMania. This [ ... ]
us-sports
The Crazy Times Of Kareem Abdul-Jabbar, The NBA All-Star Who...
This article first appeared in The Sportsman on 05/05/20 Being the number one draft pick in the NBA [ ... ]
us-sports
Blood Brothers: Randy Orton And Riddle Talk Chemistry, Growing...
The old adage dictates that opposites attract, and on the face of it that certainly seems true of RK-Bro. [ ... ]
us-sports
The NFL’s Best Trades and Free Agency Signings So Far
It’s the same every year. Almost as soon as the Vince Lombardi Trophy is awarded, attention turns [ ... ]
us-sports
Impact Wrestling's D'Lo Brown: We Didn't Open The Forbidden...
It is such an overused phrase that it has become cliched, but Impact Wrestling’s D’Lo Brown [ ... ]
us-sports
How ‘The Last Dance’ Brought Michael Jordan's Chicago Bulls...
It's now been 26 years since the Chicago Bulls ended the NBA season with a record of 72 wins and [ ... ]
us-sports
On This Day In 2018: WWE Icon Bruno Sammartino Passes Away
There have been 30 WWE Championship reigns in the last 2,803 days. In the 2,803 days between 17th May [ ... ]
us-sports
Why Jackie Robinson Day Means As Much Today As It Ever Has
Across Major League Baseball on Friday, number 42 will pitch to number 42. Number 42 will field the [ ... ]
us-sports
Frank Vogel Out: Who’s Next In The Hot Seat For The LA Lakers?
Head Coach Frank Vogel has paid the price for the Los Angeles Lakers’ poor campaign, as they failed [ ... ]
us-sports
British Invasion: WWE Announces Its First UK Stadium Show In...
WWE will host their first UK stadium show in 30 years this summer, with the American sports entertainment [ ... ]
us-sports
Giannis, Embiid Or Jokic: The Wide Open Race To NBA Most Valuable...
The race to become the NBA’s regular season MVP has never been tighter. Giannis Antetoukoumpo [ ... ]
us-sports
One Champ To Rule Them All: Lesnar Takes On Reigns On WrestleMania...
We are halfway through WrestleMania weekend, and now that you’ve finally processed what happened [ ... ]
us-sports
WWE’s Combat Sport Crossovers Have Given Us WrestleMania Moments...
This weekend, two former UFC Champions will headline WWE’s most marquee of events, WrestleMania. [ ... ]
us-sports
Return of the Rattlesnake: Stone Cold Leads WrestleMania Saturday
WrestleMania 38 is almost here, as WWE prepares to stage its biggest shows of the year. Nowadays, the [ ... ]
us-sports
The Show of Shows: The Best Match From Every Single WrestleMania
WrestleMania weekend is upon us, as WWE prepares to stage the 38th edition of the biggest event in professional [ ... ]
us-sports
The Lion and The Hyena: 25 Years On From The Most Important...
“These people are standing, can you imagine the pain that is racing through Austin’s body? [ ... ]
us-sports
Stone Cold Steve Austin Accepts Kevin Owens' WWE WrestleMania...
“Whether you want to call this ‘The KO Show’, a match, a fight, a brawl. Whatever. [ ... ]
us-sports
30 Years Since LA Lakers Retired Magic Johnson's 32, His True...
During this week, back in 1992, the LA Lakers chose to retire the number 32 jersey worn by the [ ... ]
us-sports
Michael Jordan At 59: The Man Who Changed What It Meant To Be...
In the summer of 1998, Michael Jordan won his final NBA Championship with the Bulls. Six months later, [ ... ]