On this day in 1996, Mike Tyson did what he always did. The commentators read off a list of his quickest triumphs. Bruce Seldon’s destruction was mentioned, as was the 91 second demolition of Michael Spinks. The bell rang, and ‘Iron’ Mike bobbed and weaved his way across the ring into another hapless foe. A 25-1 underdog no less.

The WBA heavyweight champion reached his target and uncorked a short right that sent his latest victim scrambling across the ring. But then, this long-shot, this statistic, he started moving Tyson back. Shoulders, elbows, fists. This purple-clad opponent drove the most feared man in boxing backwards. Mike landed a bracing straight right, but there was to be no scrambling this time. Just a volley of shots aimed back in his direction from this man who dared to survive. But this was no mere mortal in front of Mike Tyson. This was Evander Holyfield, and he was about to do the impossible.

Mike Tyson and Evander Holyfield had been scheduled to meet as far back as 1990. At the time, Tyson ruled boxing as its undisputed heavyweight king, while Holyfield had pulled off the same three-belt feat in the less-regarded cruiserweight ranks before moving up to the top division. The unbeaten fighters were all set to clash, with just the small matter of a routine tune-up fight pitting Tyson against soft-touch James ‘Buster’ Douglas. We all know how that went.

Douglas’ unwillingness to work with promoter Don King led to Holyfield, rather than Tyson, getting the first shot at the new heavyweight champion. Buster’s unwillingness to train meant ‘The Real Deal’ had very little trouble relieving him of his newly-won title belts. In the meantime, Tyson attempted to stay busy by fighting Canadian contender Donovan ‘Razor’ Ruddock. However, a controversial stoppage win for Mike led to an immediate rematch, further delaying the big-money showdown with the new champion.

‘Iron’ Mike decisioned Ruddock in their return, and finally a date was firmly set for Tyson vs Holyfield. Then Mike Tyson was convicted of rape and sentenced to six years in prison, and it looked like the fight would be relegated to the ‘What If?’ pile of lost bouts. While Tyson stewed behind bars, Holyfield played out an iconic trilogy with Riddick Bowe and also briefly retired due to a heart condition. Upon Tyson’s release, he quickly went about the task of restoring his place at the top of heavyweight boxing.

Peter McNeeley was torn to shreds in a bizarre sideshow, before Buster Mathis Jr was stopped in three rounds. ‘Kid Dynamite’ next restored two-thirds of the undisputed crown he had lost against Douglas five years before. Frank Bruno was felled for the WBC belt, before Bruce Seldon folded like a cheap suit for the WBA title. In a classic example of the “damned if you do, damned if you don’t” politics of championship politics, Tyson was stripped of the WBC strap for electing to face Holyfield in their long-awaited clash, rather than mandatory challenger Lennox Lewis. 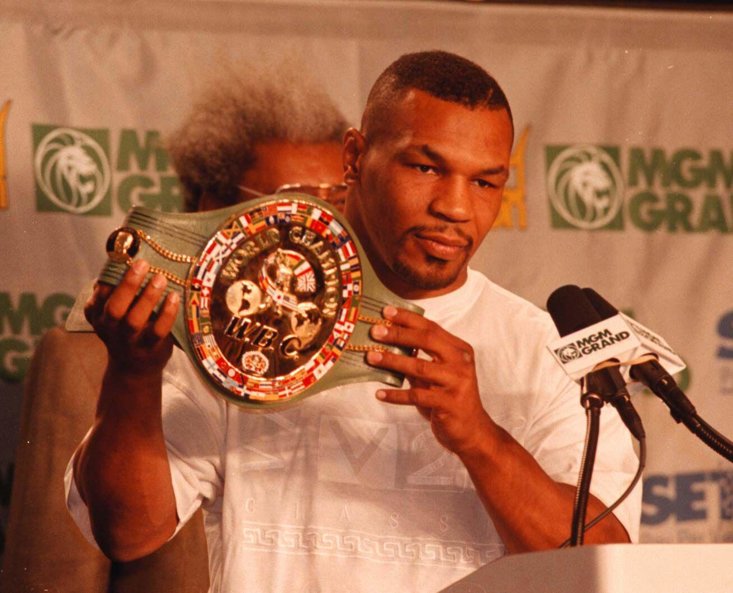 The fight was finally here, though. And it had arrived at precisely the wrong time for one of the combatants. The industry perception was that Holyfield was that fighter. ‘Commander Vander’ had lost three of his last seven outings, and at 34 years of age it was accepted wisdom that the former champion was winding down. Facing Tyson, who had won four fights and two belts in under eight rounds since his release, few gave the old stager much of a chance of a miracle. Only one of fifty polled journalists backed Holyfield to pull off the upset and become just the second man in history, after Muhammad Ali, to capture a third heavyweight championship.

This explains the attitude of the commentators, reading a laundry list of Tyson conquests before the first bell. It also explains the confidence of the champion as he rattled Holyfield with the first punch he threw. But Holyfield had come to the MGM Grand Garden Arena to defy explanation. He not only survived that torrid first round, but by the bell he was thriving in it. At the end of the round, Tyson threw an illegal post-bell shot. The intimidation games were returned in kind, as Holyfield launched a punch of his own. Evander Holyfield was not here to be an opponent. This great champion was not here to play the underdog, the willing patsy, the coal feeding the engine of the Tyson hype train. Holyfield came to win.

The pattern was set. Tyson bullied his way forward looking for the one shot that would separate Holyfield from his senses, while the challenger threw hard combinations, and no shortage of sly headbutts. ‘The Real Deal’ called on every veteran instinct he had picked up during his ascent to cruiserweight and heavyweight honours. Tyson tried to maul on the inside but was outmuscled. He tried to intimidate Holyfield but was rebuffed time and time again.

Tyson’s punches became wilder as the rounds wore on. You could have driven the aforementioned train between Mike’s fist and Evander’s bald head as his punching became more and more erratic. In this elite-level staring contest, Tyson had blinked first. His furious but futile swings were a tacit acknowledgement that he needed a knockout to win, while Holyfield was content to patiently hammer away at the frustrated champion.

Credit where it is due, for all the talk of Tyson’s bravado abandoning him under heavy fire, his display at the end of the tenth round was incredibly brave. ‘Iron’ Mike was sent flying across the ring by Holyfield’s shots, and ate a barrage of brutal punishment along the ropes before the bell ended the round. Many lesser men would have folded then and there, but Tyson absorbed the shots and went back to his corner. It would be his last stand.

For all the criticism of his emotional state, his fight or flight reflex tending towards the latter when he was up against it, Tyson went out on his shield. He came out for the eleventh round still visibly unsteady, carrying the physical and psychological scars of battle. But he went out to meet Holyfield for one last roll of the dice. A series of unanswered shots ended his night, his reign and his stay at the highest level of boxing in one fell swoop. The 25-1 underdog was the new champion. The miracle man had proved he was ‘The Real Deal’. The boxing world had waited for six years to see Holyfield face Tyson. Very few people over that time had expected the dream fight to end in a nightmare for Mike Tyson. 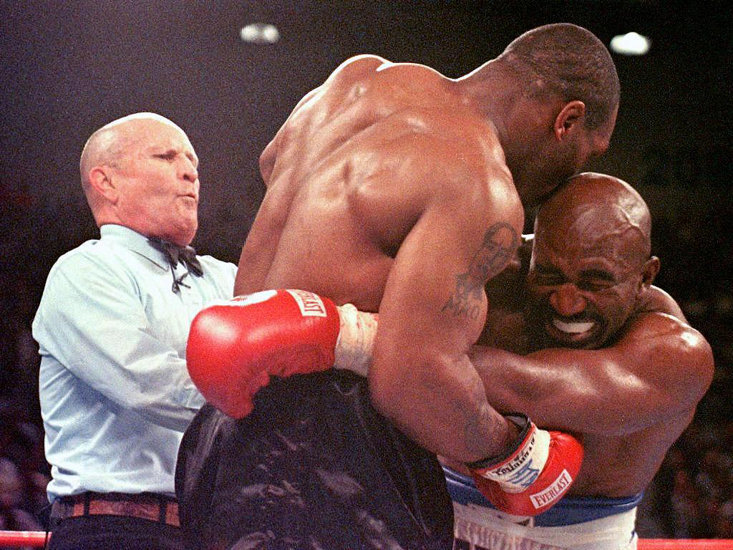 The quality of the action and nature of the upset result necessitated a rematch. The second go-round eroded the powerful bravery Tyson had showed in the final couple of rounds of the first fight. In 1997, ‘Iron’ Mike would lean heavily on his flight reflex and get himself disqualified for biting Holyfield’s ears, incurring a one-year ban in the process. It would be the last time Tyson entered a heavyweight championship fight as the betting favourite. By the time Lennox Lewis beat the breaks off him in 2002, it was Mike’s turn to play the underdog.