There’s 50 seconds left in the first round. Mike Tyson has been rocked for the first time in an unblemished professional career. A left hook-right hand combination has the undisputed heavyweight champion of the world reeling. This has never happened before. ‘Iron’ Mike staggers forward, half-holding and half-hitting but doing neither effectively. He survives the round on unsteady legs, the way his 35 previous victims had often tried to do. Tyson hears the bell to end the round, but he knows he’s in for a fight with this guy. This guy is Frank Bruno.

Bruno’s first-round beating was the eye of a particularly gruesome storm in the life of 23-year-old Michael Gerard Tyson. The gladiatorial heavyweight was coming off his annus horribilis in 1988. At the behest of promoter Don King, Tyson had fired head trainer Kevin Rooney and the majority of the team that had taken him to the top of his sport. He had broken his hand on the face of former opponent Mitch ‘Blood’ Green during a street fight. And to top it all off his wife, actress Robin Givens, filed for divorce. Tyson had been through more in one year than most of us face in a lifetime.

Frank Bruno’s existence was a picture of calm in comparison. The affable British slugger had been out of the ring for a year, since stopping Joe Bugner in a big domestic grudge match. It appeared Bruno was done, having enjoyed a good career that stopped just short of greatness. He had lost just twice, to James ‘Bonecrusher’ Smith and in a WBA heavyweight title challenge against Tim Witherspoon. But the fact he had never won the world crown ate away at the man they called ‘True Brit’.

An October 1988 date was set for a blockbuster heavyweight title showdown at Wembley Stadium between Tyson and Bruno. The champion’s street brawl with Mitch Green, and the subsequent hand injury he suffered, put paid to that plan. After much to-ing and fro-ing, the bout eventually found a home at the Las Vegas Hilton in February 1989.

Few gave Bruno a chance against Tyson. But then few gave any boxer a chance against Tyson at this point. 35-0 with 31 knockouts, 15 of which arrived in the first round. In the uneven 1980s heavyweight scene, there appeared to be no viable challengers left to Tyson’s dominance. Pundits were reaching further back to the likes of Muhammad Ali, Joe Louis and Jack Johnson to find worthy adversaries, albeit in hypothetical fights of the mind. As beloved as the happy-go-lucky giant was, nobody thought Frank Bruno would be able to cope with Mike Tyson. 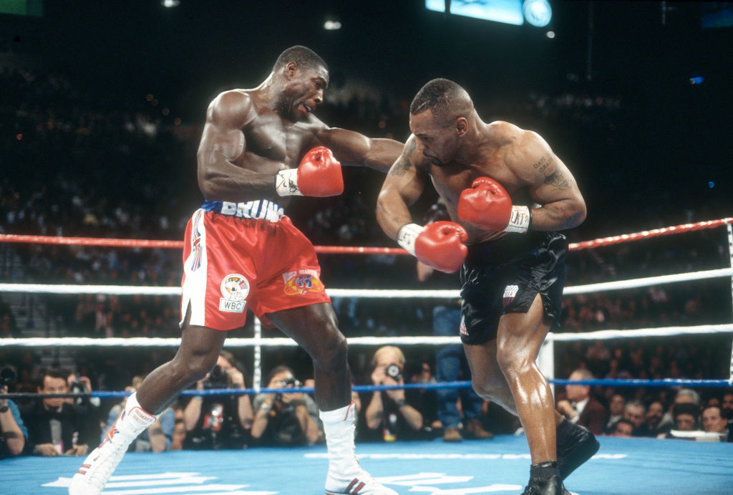 This wisdom appeared to pass into verifiable fact in the opening round, when a short right hook from Tyson turned Bruno’s legs to jelly inside ten seconds. The Londoner tried frantically to fire back, but was swiftly deposited on the Nevada canvas. But Bruno rose and shrugged, like a man temporarily losing his footing on a pavement and continuing on his way, unfazed. But fazing people was Tyson’s modus operandi, you didn’t just get up from a Tyson flurry. But Frank Bruno did, and then he took the fight right back to the heavyweight champion of the world.

The action was the sort of street-level scrapping Tyson had partaken in with Mitch Green, as both men grabbed onto each other with one arm and bludgeoned away with the other. This was pure, unfettered violence. Most boxers tried to avoid the furious fists of ‘Iron’ Mike, Bruno tried to walk through them and land leather of his own. And it was working. In the final minute of the round, Bruno scuffed the previously impenetrable Tyson armour for the first time in his career. Mike stumbled, shocked that he even could be hit. The champion staggered as his challenger tried desperately to end the fight. It was to no avail, but Bruno had stood his ground and fought Tyson in a way no one had dared attempt. Bruno was going punch-for-punch with the ultimate puncher.

Tyson once again looked to have restored the established order in the second, when a right hand sent Bruno careening into the ropes. The Briton managed to survive under heavy fire, showing durability and heart to stand up to Tyson’s volleys. While nothing could sap the spirit from Bruno, the chances of an upset seemed to dissipate in that moment.

The remainder of the bout would be one-way traffic, with Bruno trying to evoke that first-round flashpoint while falling sadly short. A series of ripping uppercuts against the ropes in round five would draw the intervention of referee Richard Steele, and end Bruno’s title dream. At least for now.

The two men would meet again in 1996, after Bruno had fulfilled his destiny. The good-humoured heavyweight beat Oliver McCall for the WBC belt in 1995, finally triumphing in a world title bout at the fourth time of asking. The rematch with Tyson would not rival the 1989 scrap for electricity, and Bruno was battered and beaten in three rounds. But nobody could take away the fact Frank Bruno had finally reigned as heavyweight champion of the world, nor can anyone take away the fact he was the first man to rock the seemingly-invincible Mike Tyson.