On April 28, 1923, Second Division West Ham United faced top-flight Bolton Wanderers in the first ever FA Cup final to take place at the new Wembley Stadium, and such was the clamour to see the game that a mounted police officer had to keep the crowd from spilling onto the pitch; meaning this would forever be known as the “White Horse Final.”

Following the tournament’s conception in 1871 the FA Cup final was something of a moveable feast with the very first taking place at Kennington Oval on 16 March 1872 between Wanderers and Royal Engineers and then at various locations including; Fallowfield Stadium in Manchester, Goodison Park and Crystal Palace in subsequent years.

But by the turn of the 20th century a permanent home was needed for what had become a showpiece for the game and The Empire Stadium, as it was then known, which was to be built as a centrepiece of the 1924 British Empire Exhibition, was seen as the ideal location.

An agreement was eventually signed by The FA and work began on the new stadium which was finished in an astonishing 300 days at a cost of £750,000 while an infantry battalion were drafted in to march on the vast terracing to test its strength just days before the new ground was opened to the public; but even that couldn’t prepare this new structure for what was about to follow.

The chaos that day began some three hours before kick-off as thousands of fans swarmed into the stadium eager to see what was regarded as the sporting event of the century. The gates were opened at 11.30am and by 1pm the stadium was almost full, with the turnstiles finally being closed some 45 minutes later.

The authorities were hopelessly overwhelmed by the hordes of fans that had turned up and as a result the entire Bolton team had to abandon their bus a mile from the stadium and continue the remainder of their journey to the ground on foot such was the size of the crowd.

Originally designed to hold 125,000 people it’s thought that more like 300,000 people were in or around the ground that day but by the time kick off came around there was no way the game could go ahead.

Eventually starting almost an hour late, when the game did get underway such was the size of the crowd that a white police horse named Billy was used to keep people off the playing area; something which would later become the defining image of that memorable day.

“The horse was very good, easing them back with his nose and his tail until we got the crowd back along one of the goal-lines,” Billy’s rider, PC George Scorey, explained to the BBC some years later. “We continued up the touch-lines until some of them got a bit stubborn. ‘Don’t you want to see the game?’ I said. They said ‘Yes’ and I said ‘So do I. Now those in front join hands.’ Then I gave the word to heave and they went back, step by step, until they reached the line.” 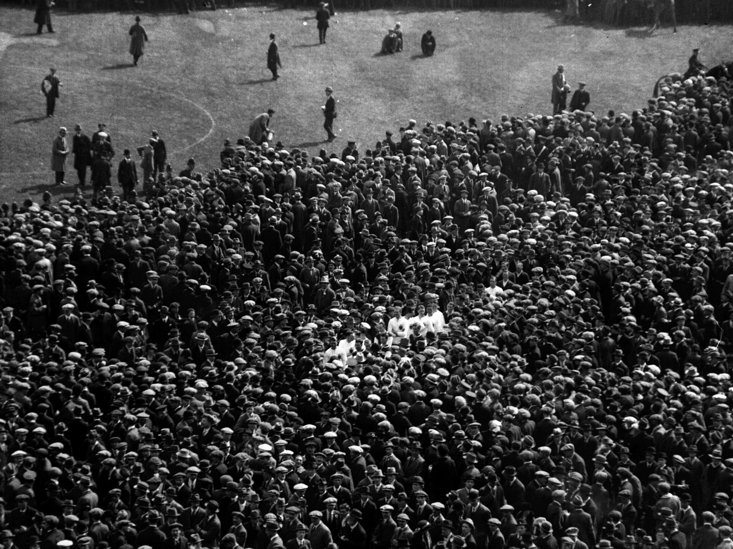 With so many people in such close proximity to the pitch it was virtually impossible for a proper game of football to be played as each time the ball looked to be going out of play it would get kicked back onto the pitch, while when a corner was awarded players couldn’t even find enough room to take a run-up.

But that didn’t stop David Jack, who had scored in every round of the cup that season, blasting the ball past West Ham’s ‘keeper Ted Hufton to give Bolton the lead after just three minutes while at halftime the crowd was so dense that the teams couldn’t even leave the field for the dressing rooms so stayed on the pitch for the break which only lasted eight minutes.

In the second half Jack Smith doubled their lead, not only to secure a 2-0 but also the Lancashire sides first of three FA Cup wins that decade while West Ham would have to wait another four decades to finally lift the famous trophy.

Despite the chaotic, and at times frightening scenes, miraculously there were no lives lost at Wembley that day with just a few minor injuries reported, while the FA even refunded those who claimed that they had been unable to reach their allocated seats.

West Ham’s defeated trainer Charlie Paynter was less than graceful in defeat, however, blaming his team’s loss on the damage the pitch had suffered before kick-off: “It was that white horse thumping its big feet into the pitch that made it hopeless,” he said. “Our wingers were tumbling all over the place, tripping up in great ruts and holes.”

As for PC Scorey and his now famous white horse Billy a subsequent enquiry stated that the final would not have been able to go ahead without their intervention and as a result the “White Horse Bridge” outside the newly built Wembley stands as a permanent monument to one of the FA Cup’s most unlikely heroes.