When disaster struck at Burnden Park on March 9, 1946 it was the biggest single loss of life at an English football ground for almost forty years as 33 people died and hundreds more were injured following a deadly crush at the former home of Bolton Wanderers.

The FA Cup quarter-final, second-leg, as it was then, between Wanderers and Stoke City was one of the most eagerly anticipated games for years in a nation which had been starved of football for almost six years due to the outbreak of World War II, so it’s no surprise that so many people wanted to see the clash.

The home side, who held an advantage from the first-leg, had won the cup three times between 1923 and 1929 and were seen as one of the greatest sides in the land at the time, whereas Stoke City boasted probably one of the greatest and most recognisable players of the day in the form of Stanley Matthews; a combination which generated huge interest in the fixture.

Estimates at the time put the attendance at anything up to 80,000 people that day, almost 15,000 more than the ground was able to hold back then and, despite the interest that the game generated, the match wasn’t made all-ticket despite Bolton’s highest attendance that season being just over 40,000.

To make things worse everyone entering Burnden Park had to use just a couple of turnstiles as much of the ground was still closed off having been used during the war as a storage facility and was not yet fully open; ultimately creating huge congestion outside the stadium. 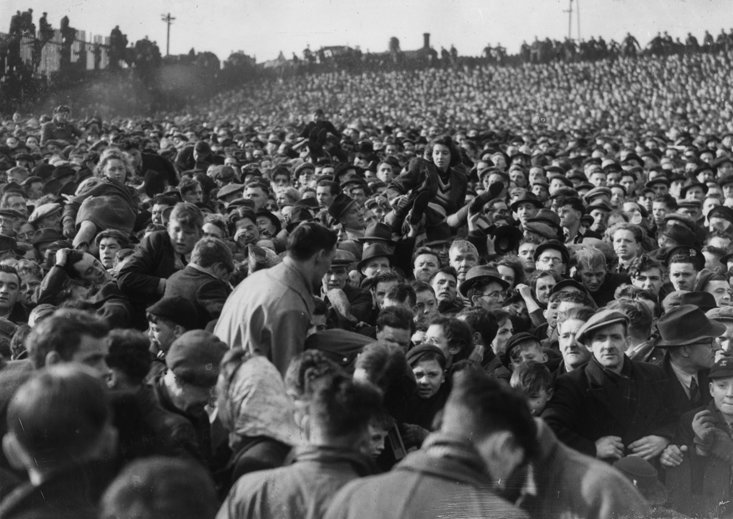 As the ground reached capacity the gates were eventually locked with thousands still outside eagerly trying to get in and when an exit way behind the goal was opened many saw this as an opportunity to gain access to an already full and increasingly dangerous terrace.

Initially, it was suggested that the gate was forced open by those locked out, while other reports claim that it was opened by someone inside as they looked for an escape from the crush. Whatever the reason, as the game started a number of barriers gave way at the Embankment End causing thousands to fall forward.

“It was such a crush,” remembered Bill Cheeseman who was at the game and spoke to the BBC some years later. “It was getting dangerous. We were getting squeezed by the people in front and behind. Everyone was pushing. All of a sudden, those that were in front of us seemed to go – all falling down like a pack of cards. We managed to get out and I was glad about that.”

But despite the game being halted temporarily as spectators, both dead and injured, were carried out of the crush play soon re-started as this gripping cup tie continued as bodies were laid out on the side of the pitch.

After just 12 minutes of the match the referee did take the sides off the field as the seriousness of what was happening became obvious to everyone, but incredibly 30 minutes later, on the advice of the police, the match kicked-off once more, this time with a new touchline that had been created using sawdust just yards from those who were dead or dying and who had been covered with coats or blankets to maintain their dignity.

At halftime there were no team talks or tactical switches in the dressing rooms, the players instead simply changed ends and hastily restarted the game which not surprisingly finished in a very forgettable 0-0 draw.

And spare a thought for the players who were put in the incredibly difficult position of having to play a football match with so much suffering around them that day. Stanley Matthews, the man who thousands had gone to Burnden Park to see that day, later explained that the scale of the devastation had only reached them after the game.

“It wasn’t until I was driving home that evening that the shadow of grim disaster descended on me like a storm cloud,” he wrote.

A subsequent investigation led to the introduction of a number of changes which it was hoped would prevent a similar tragedy ever happening again. Mechanical turnstiles were introduced to track attendance numbers and it was recommended that all grounds should have better communication systems in the event of a disaster; meanwhile in 1992 a plaque was eventually unveiled at Burnden Park before being moved to a new home in 2000 when the old ground was eventually demolished.

Sadly, as is so often the case, these changes were too little and too late to prevent the deaths of 33 people who went to a football match on March 9, 1946 and never came home; not to mention subsequent disasters which, as we know, were sadly far too common at British football grounds in years to come.