Football
News
John Barnes would go on to make over 400 appearances for the Anfield club
Matthew Crist
08:20, 09 Jun 2021

On the 9th June, 1987 John Barnes signed for Liverpool from Watford for £900,000 and would go on to become a true great of his generation while forming a key part of one of the finest sides ever seen in English football.

When Kenny Dalglish completed the signing of John Barnes on June 9th few people knew then just what an impact he’d have at Anfield in what would prove to be a pivotal pre-season for the club in the transfer market.

The previous season the Reds had finished runners-up to neighbours Everton while failure to lift either the FA Cup or the League Cup ensured a rare trophy-less campaign in an era where they dominated almost every competition they entered.

Potent striker John Aldridge had joined the club he supported as a boy from Oxford United at the back end of the 1986/87 campaign to fill the void left by striker Ian Rush, who had left for Juventus, while the skilful Peter Beardsley would also come south from Newcastle for a record fee of £1.9 million and Ray Houghton also arrived from Oxford in October as Liverpool looked to revamp their ageing squad.

But it was the arrival of Barnes that would really capture the imagination of many of the club’s fans having lit-up the English top flight following three promotions with Watford in five seasons, which had seen the Hornets rise from the Fourth Division to the First in just four years.

Barnes also arrived after scoring one of the greatest goals ever seen by an English player on the international stage having weaved through the Brazilian defence at the Maracana three years earlier and was seen as a key part of the England squad ahead of the European Championships of 1988 and the 1990 World Cup in Italy.

And he certainly lived-up to all expectations in his first season at Anfield, taking just nine minutes to create his first goal in a Liverpool shirt as he set-up John Aldridge in an opening day of the season win at Arsenal which the tone for a sensational title-winning campaign before scoring a first goal for the club in his fourth appearances as the Reds won 10 of their first 11 matches. 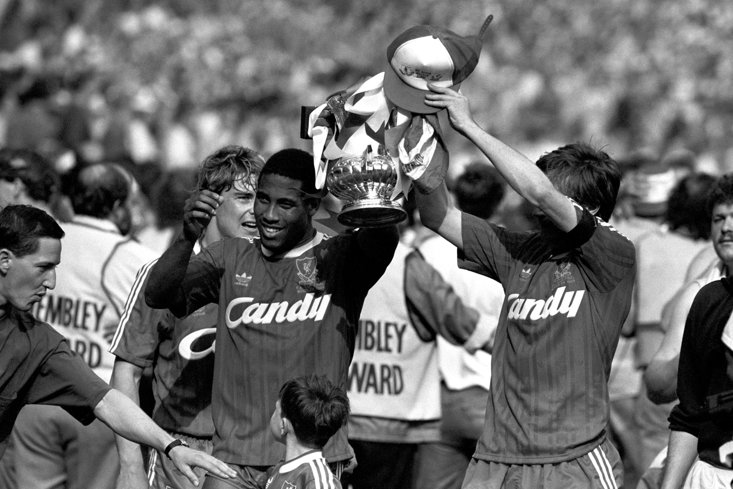 Dalglish’s men amassed 90 points that season, scoring 87 goals in the process. They only failed to score in four league games and in nine matches they hit the net four times, twice putting five past their opponents and didn’t taste defeat in the league until the 30th game of the season at March away at Everton.

Liverpool lifted the league championship trophy with four games of the season still left to play; but in all honesty they pretty much had it won by Christmas and eventually finished nine points ahead of nearest challengers Manchester United, with Barnes deservedly being named the Football Writers Association Player of the Year.

The following season Barnes would play a huge part in Liverpool winning the FA Cup while a stunning run of form after Christmas, which was only disrupted due to the tragic circumstances following the Hillsborough disaster, saw them come within seconds of another league success, only to miss out to Arsenal in an epic title race which went to the final game at Anfield.

He would help Liverpool regain the title in 1990, though, wrestling it back from George Graham’s Arsenal with the help of his 22 goals while a number of standout performances earned him a second FWA Player of the Year award as he joined an elite group of players to win the award twice, including the likes of Kenny Dalglish, Tom Finney and Stanley Matthews.

However, Barnes would not flourish to the same extent after the shock departure of Kenny Dalglish in 1991 following a thrilling 4-4 draw with Everton in the FA Cup, while injury would strike in the form of a ruptured Achilles tendon in 1992 - the same year that new boss Graeme Souness guided the side to FA Cup glory over Sunderland at Wembley.

Even following his recovery, the injury would severely hamper his game and would see him play as a deep-lying midfielder when Roy Evans became manager in 1994 with Barnes no longer possessing the pace which had made him such a threat out wide.

More than capable of playing a key role, while also still being able to play a killer ball, Barnes would be part of the Liverpool midfield that won the League Cup in 1995, and captained the side under Evans the following season, but would eventually leave the club in 1997 when he joined Newcastle on a free transfer.

In 407 games John Barnes would score 108 goals for Liverpool but his blistering pace, electrifying skills, tremendous shooting prowess and sheer ability with the ball would ensure he remains a Kop hero while generally being regarded as one of the greatest players that ever played the game.