Football
News
It is 32 years since the incredible goal which gave Waddle lift-off in France
Kris Voakes
10:55, 27 Oct 2021

They called him ‘Magic Chris’ in Marseille. Having been a fantastic flair player for Newcastle United and Tottenham Hotspur, Chris Waddle became a legend in the south of France between 1989 and 1992.

An England international at a time when the nation’s clubs were banned from European competition, he was far from the first player of his era to test himself abroad, but he went on to become one of the most successful exports of that period.

Known as a tricky winger who could go either way past a full-back, Waddle arrived in Marseille with a reputation for having a languid, even lazy, look about him. But at the Stade Velodrome he was given the licence to attack at will, and he returned the favour with perhaps the greatest spell of his glittering career.

He had been snapped up for £4.5 million, the third-highest transfer fee of all time behind those paid for Diego Maradona and Ruud Gullit, and found himself being chased through shopping malls by schoolkids such was his immediate elevation to fame. 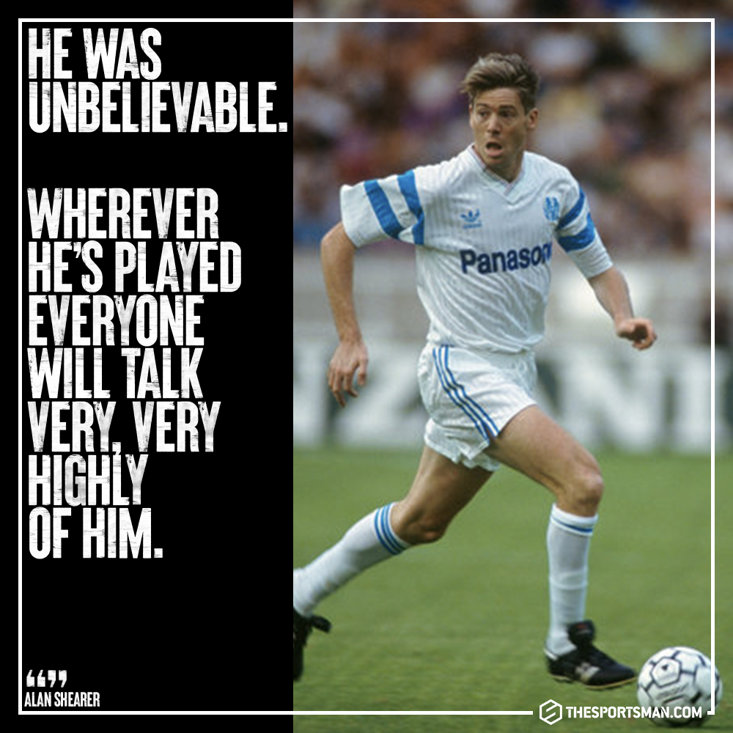 But things didn’t start particularly well on the pitch. At least, not until 27 October 1989.

“It was all ‘Waddle, what a waste of money,’” the man himself later told the Daily Mail of the press coverage at the time. “I was sick of my life by now. They didn’t know where to play me. They bought me as a number 10 but that wasn’t me.”

Ahead of the first clash of the season with Paris Saint-Germain on this day 32 years ago, Waddle had a meeting with the manager in which he explained that he wanted to play in his more natural wide position. He also finally moved into his own place that week, having until then been living out of a spare room at teammate Jean-Pierre Papin’s house, but believed it would be another short-term arrangement if his form didn’t improve. “I said to my wife ‘This is it now, if it doesn’t work by Christmas I’ll probably get booted out anyway.’

But on that night against PSG, Waddle’s Marseille career truly began. With the game scoreless, a Marseille corner was half-cleared. Left-back Eric Di Meco lofted an angled ball back in towards the far post and Waddle was left in the clear to chest the ball down with goalkeeper Joel Bats bearing down on him.

Thinking he was probably offside, Waddle lofted the ball over Bats and nonchalantly back-heeled it into the empty net. Far from turning around to see an offside flag, he was being chased by teammates wanting to congratulate him on the goal that would change his Marseille career.

With that moment of audacity, a previously underwhelming big-money Englishman had proved that he had everything needed to succeed in France, and from then on, there was no stopping Waddle. Playing on the wing but with an insistence from the coaching staff that he didn’t track back to cover the full-back, the England star revelled in the freedom.

What he achieved helped to inspire players who would become legeneds themselves. "I grew up supporting Marseille, and what he was doing with Marseille was a standard I've never seen before," Thierry Henry told the BBC years later. "He could dribble past a player without touching the ball."

Alongside Abedi Pele and Eric Cantona, he was part of an attacking midfield line which helped to make Papin the most feared striker in the game. That season Marseille won the league with Waddle scoring 12 goals. They’d win two more in the next two campaigns, and made the 1991 European Cup final, only losing to Red Star Belgrade on penalties after a 0-0 draw.

Waddle left in 1992 to join Sheffield Wednesday ahead of the inaugural Premier League season, but he remains in the hearts of Marseille fans to this day. In 1998 he even placed second in a Player of the Century vote among l’OM supporters, behind only Papin.

One of the most flair-filled players England has produced in recent history, Waddle is treasured every bit as much in France than he is in Blighty. It might have been very different but for that audacious back-heel goal against PSG.