Mike Tyson rocks back and forth, chewing his mouthpiece. The Catskills heavyweight always carried the veneer of a caged animal during ring introductions. This time though, he was carrying the true weight of the experience of incarceration. ‘Iron’ Mike almost stares through his opponent, like Peter McNeeley is not even present.

To Tyson, it does not even seem to matter who his opponent is. After nearly three years in prison, charged with the rape of beauty paegant contestant Desiree Washington, Mike Tyson was prepared to fight absolutely anyone. He had waited since 1991 to ply his fistic trade once more. His first fight back would be over in 89 seconds.

On this day in 1995, Mike Tyson boxed Peter McNeeley in what was the most-watched boxing pay-per-view in history at the time. It cannot be overstated how big of a draw Mike Tyson was through the ‘80s and ‘90s, and interest in his ring return was huge.

Despite the horrific nature of his crime, Tyson was neck-and-neck with the other Mike, NBA superstar Michael Jordan, as the most visible sports star of the era. For this reason, Tyson’s rumoured bouts with Evander Holyfield and George Foreman were shelved in favour of giving the returning heavyweight a more modest opponent. The hope was that the rusty former champion could blow off the cobwebs in a low-risk outing. Enter Peter McNeeley.

‘Hurricane’ carried a reasonably respectable 36-1 record into the Tyson clash, enough to earn him a top 20 ranking with the WBA. However, interest in the contest was almost completely centred around his opponent, and McNeeley was seen as the latest in a long line of “real-life Rocky Balboa” no-hopers. The underdog did have fighting in his blood. His grandfather, Tom McNeeley Sr. missed out on competing at the 1928 Olympics through injury, while his father, Tom Jr. challenged unsuccessfully for the World Heavyweight Championship against the great Floyd Patterson. If McNeeley thought he could redeem his family’s fistic legacy, Mike Tyson was not in the mood to offer a fairytale ending. 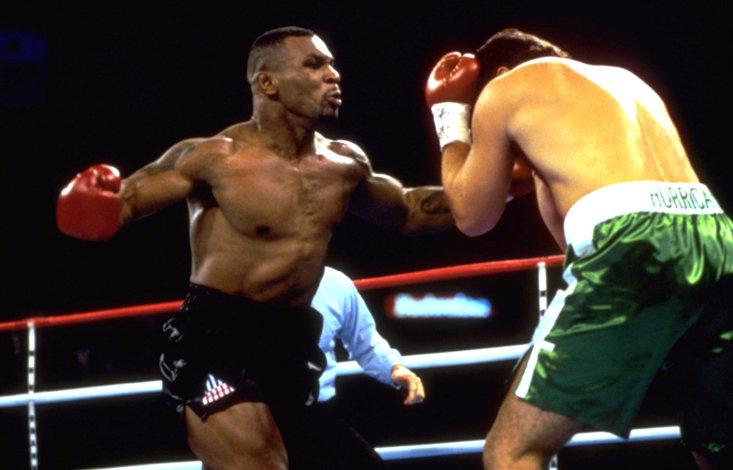 When the bell rang at the MGM Grand in Las Vegas, McNeeley honoured the promise he made to reporters to rush his illustrious opponent from the outset. Numerous wild swings were coolly ducked by Tyson, before an educated right hook put McNeeley on his back just 10 seconds into the bout.

Relishing his newfound fame, the theatrical ‘Hurricane’ rose almost immediately and began jogging around the ring. When the action resumed, McNeeley momentarily backed the former undisputed king up with more wild swings. While a wild, unkempt style was expected from the Bostonian, the shots coming back from Tyson were similarly unfocused. At the time, this would appear to be a symptom of a three-year lay-off. In subsequent fights, it would become clear that Tyson the ring technician had been left behind in his cell, replaced by a wildman who relied increasingly on raw power.

Just when it appeared the largest pay-per-view boxing audience in history had tuned in to see a glorified car park brawl, Tyson elevated the fight, and his opponent’s jaw, with a superb right uppercut. ‘Hurricane’ hit the canvas with force, and once again attempted to rise quickly. There would be no jogging this time, a glassy-eyed McNeeley exerting the full extent of his energy merely to stand still. With his charge in a stupor, manager Vinnie Vecchione would enter the ring to save his charge from further brutality at the feted fists of Tyson. The official result would be a first-round disqualification win for the returning former champion, by virtue of Vecchione’s interference. But it was clear from the state of McNeeley, this was a stoppage by any other measure.

The two men would take wildly divergent paths from this point, rendering this strange but lucrative fight an interesting crossroads clash. Tyson pocketed $25 million for his efforts, and would reclaim the WBA and WBC portions of his old heavyweight crown, before losing a pair of fights to Evander Holyfield. The second bout is notorious for Tyson biting part of Holyfield’s ear off, earning a disqualification and another spell on the sidelines. He would never again lift a version of the World Heavyweight Championship, and retired in 2005, before returning for a well-received exhibition against Roy Jones Jr. in 2020.

Peter McNeeley would never return to the upper-echelon of professional boxing. However, his new-found notoriety earned him a number of sponsorships, and he would continue to fight, albeit with a far lower profile. Losses to former WBO Champion Henry Akinwande, Danish contender Brian Nielson and Jackass favourite Butterbean are the standout moments in a career that ended in 2001.

Legal troubles would follow in 2006, when McNeeley was charged with assault and driving a getaway car during a robbery. Thankfully McNeeley’s life seems more stable nowadays, and he still sees his old rival Tyson from time to time. Despite only sharing the ring for 89 seconds of action, the events of 19th August 1995 have left an indelible imprint on the lives of both men.