Eleven years ago today, as Inter Milan knocked Barcelona out of the Champions League at the Nou Camp, we witnessed peak Jose Mourinho. There was the defensive masterclass, the commanding tactics and best of all, the arrogance and swagger on show of a man who knew he was the business on the touchline.

Having guided the Italians to the final of Europe’s premier competition, Mourinho sauntered onto the pitch of his former club with a finger in the air, and ran around in celebration. Once Sir Bobby Robson’s translator here, he returned a manager and claimed victory. He roared at the supporters and ignored goalkeeper Victor Valdes’ angry protests. This was his win and he was going to enjoy it exactly how he wanted to. Mourinho had got the better of Lionel Messi and Co and enjoyed the adulation as if he had put the ball into the net himself.

On the way to winning an historic treble, the Nerazzurri beat Barca 3-1 at the San Siro, with Wesley Sneijder, Maicon and Diego Milito scoring to seal a memorable victory. Despite the advantage, they headed to Catalonia two years into the Pep Guardiola revolution. The fact Thiago Motta was dismissed after only 28 minutes made the prospect of keeping Barca out even more difficult. However, centre-backs Lucio, Walter Samuel and Christian Chivu with the help of Javier Zanetti and Maicon, kept the Spanish giants out until the 84th minute when Gerard Pique grabbed a goal to set up a nearby and tense finale. 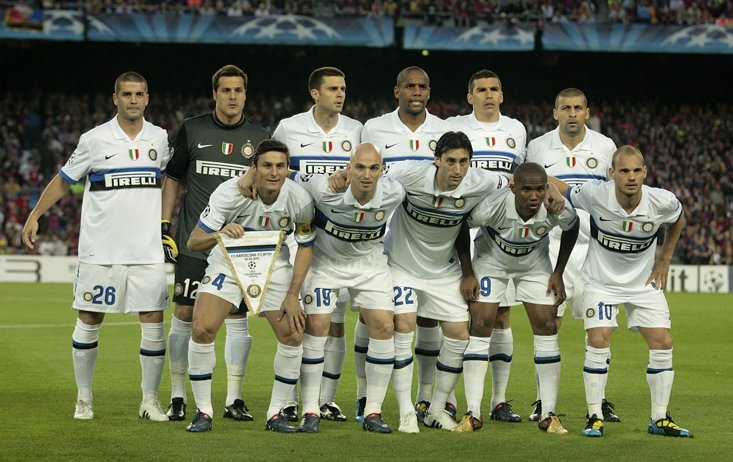 They held on, and the emotion of reaching the final was clearly on the face of every player. They had done it, they had defended stoically, dug in and got their rewards. Now, they would face Bayern Munich in the final and win. Beating Barcelona, Mourinho charged onto the pitch. He owned it, taunting the home support and celebrating with his loyal away following in black and blue.

Delivering three trophies to Inter, including the Serie A title back in 2010, Mourinho was the peak of his powers. Now, his career is at another crossroads having been sacked by Tottenham as the north London club stuttered through another season outside the top four places.

In the eleven years that have passed since his iconic Nou Camp moment, the ‘Special One’ has endured a rollercoaster ride of success but downfalls too. He returned to Chelsea to win another title but left after an apparent player revolt. Real Madrid and Manchester United followed but Mourinho’s tenures unravelled despite delivering silverware, as he fell out with key men at the Bernabeu and Old Trafford.

His stunning display with Inter was everything great about Mourinho but sadly, as he looks for his next job with less and less heavyweights an option with his stock falling, it seems those heady days are gone. Mourinho is still box office and a man of very many opinions but when the results dip, they lose their weight. Is he now firmly yesterday’s man?

Football on BT Sport
@btsportfootball
📅 OTD in 2010, we witnessed absolute peak José Mourinho 🤣
He lapped up the celebrations as Inter did a number on Barcelona at the Nou Camp 🔵⚫️